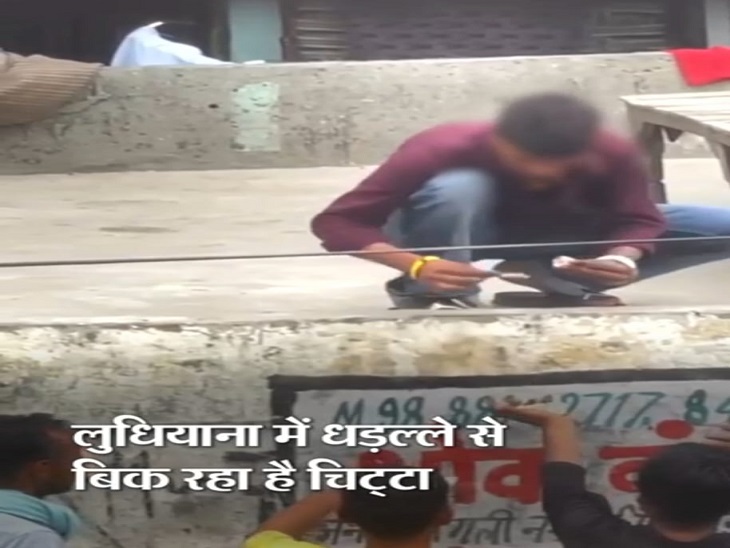 Youth buying chitta by standing in queues in Ludhiana.

There is an open sale of drugs in Ludhiana city of Punjab. A video has surfaced, in which there is a queue of youths near Cheema Chowk to buy drugs. The smuggler is openly selling drugs to the youth and all this is happening under the nose of the police, because the place where this drug market is located, there is a police station Moti Nagar and Anti Narcotics Cell at some distance from there. It is being told that the youths run away in the small streets of the colony by distributing intoxicants standing on the roofs.

Smuggling is happening in the MLA’s pocket

Chitta is not being sold anywhere else, but in the constituency of Halka Central MLA Ashok Parashar Pappi. Before the election, the MLAs who made big claims of ending drug addiction, used to roam around in the civil hospital or corporation parking and go live, but till now the MLA did not get any information about the sale of sticks by standing in lines in his own constituency. Is.

It is being told that the smugglers of Chitta have the hand of political masters on their heads, due to which the police also shy away from putting their hands on them. It is being sold in broad daylight across the road in front of the power house near Chitta Cheema Chowk. People tell that many youths steal goods from their homes and give them to these smugglers, in return for which the youth get chitta.

MLA Ashok Parashar Pappi went to the colony a few days ago and talked about burying drug smugglers in the ground. (file photo)

The MLA had said – I will bury it in the ground

Let us tell you that in the colony where the video of drug smuggling has gone viral, the mild MLA had gone to this place about a month ago. SHO Moti Nagar was also accompanying the MLA. In the presence of the police, the MLA had warned the drug dealers in the area that if anyone sells drugs in the area, he would bury them in the ground.

It is being told that after the departure of MLA Parashar, Chitta started selling openly from the very next day and youth started buying Chitta by waiting in lines. Now the question would have arisen that what had been said by the MLA indicating that after his departure, the chitta started selling so openly in this area from the very next day itself. People started buying in lines.

Let us inform that MLA Ashok Parashar had leveled allegations of selling chitta before the election, but it has been more than 2 months since the AAP government was formed and still chitta is being sold openly in the central. Sources say that instead of raiding, the police go to the houses of the suspects and go out of the houses of those people laughing and shaking hands.

Many times there was a dispute in the area

According to the people, the place where Chitta is being sold, many times there have been fights between the drug smugglers with the factory owners. If someone opposes these drug smugglers, then the smugglers also attack him fatally. Many times his employees have been robbed. Factory owners say that if the police do not take any strict action, they will have to close their factories.

Colony in reach of smugglers due to highway

People tell that due to the proximity of the national highway, drug smugglers easily transport drugs to the colony and then it is further supplied. Here women give drugs to many youths at home. One pudding of chitta is easily available for 500 to 700 rupees. Sources tell that smugglers come during the night and leave after giving delivery of chitta.

The big challenge for the government is to eliminate drugs

Drug addiction is such a python, which swallowed many youths and swallowed the captain’s chair as well. Eliminating drug and drug mafia is a big challenge before AAP. People caught in the grip of drugs spend about Rs 17 crores on drugs in a day, that is, about 6500 crores are being spent on drugs in a month. From this it can be estimated that how big will be the size of drug trade in Punjab.

30 percent out of 80 are becoming drug free

According to an official, 76 per cent of the drug addicts in Punjab are in the age group of 18 to 35. 89% of drug users are educated. 83 percent are doing jobs along with drugs. 56 percent of the drug addicts belong to the village. Apart from heroin and chitta, those who are using opium and pharmaceutical opioids. Their average daily expenditure is around Rs 300. The survey also found that more than 80% try to quit drugs, but only about 30% actually get help or treatment.

What to say to the police commissioner

In this matter, Police Commissioner Kaustubh Sharma said that the matter is very serious. Today they form teams and conduct raids. Drug smugglers are being caught in Ludhiana. People are appealed to immediately inform the police wherever there is drug smuggling.