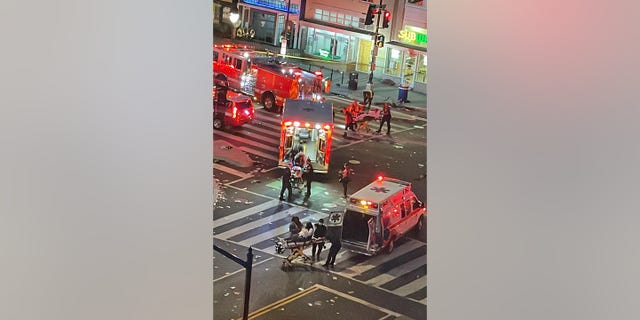 A shooting in Washington DC on Sunday has left one person dead and several others injured, including one police officer.

A spokesperson for the Metropolitan Police Department told TOU that four people were shot, including one police officer, who did not return fire in the crowded area.

BREAKING: MPD confirms that a juvenile male who was shot at U ST NW did not survive and is now deceased. An MPD officer who was shot is recovering. Another two individuals suffering gun shot wounds are also recovering.

The MPD officer was shot in a lower extremity and is expected to survive, the chief said.

Chief Contee said the shooting took place at an unpermitted event in connection with Moechella, which is described as an “Advocacy Festival Amplifying the Culture of Washington DC.”

“We need to make sure individuals are held accountable for their actions,” Contee said.

Video from the scene of the shooting shows officials helping multiple people lying on the street.

“When you have large gatherings in a dense area, it only takes one person with a firearm to make this a dangerous setting,” the police chief added.

Contee also said several illegal firearms were recovered by police officers earlier in the night and at least one firearm had an extended magazine. The firearm that was used on the officer was not recovered, he said.

Washington, DC Mayor Muriel Bowser also spoke during the presser, calling for “accountability” for those responsible.

The event’s marketing had convinced the MDP that a heavy police response would be necessary and over 100 officers were sent to monitor it.

A shooting in Washington DC on Sunday has left multiple people injured, including one police officer. (Credit: @SEWINNOVATIVE)
(@SEWINNOVATIVE)

This is a developing story. Check back for updates.