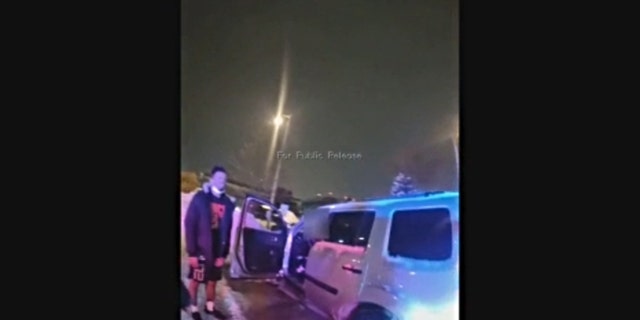 Student Adonis Tugle posted a preliminary video of the incident taken to Instagram by his girlfriend in February that showed Purdue University Campus Police (PUCP) officer John Selke pinning Tugle to the ground in a shovel of snow while he and her His girlfriend asked him to stop.

The university also issued a 911 call that led to an arrest in which someone on campus reported “a couple … shouting very loudly”, in which a man was standing outside a car parked near the university building and one The woman was sitting inside the car.

New footage released from Selke’s body cameras shows the entire incident from the moment police arrived at the scene and left. Tuggle can be heard telling the officer in the video that he has his girlfriend’s phone and wallet because “she is not listening to him”, and that he was “trying to get her attention.”

“Okay, here’s the deal. Get in the back of the car. I asked you nicely once,” Selke says in a bleeped video obtained by TOU Digital via a Freedom of Information Act (FOIA) request.

Things escalate quickly when the officer tells Tugal to put his hand behind his back and says something to Tuggle’s girlfriend that has been corrected. Tugal then repeatedly tells the officer, “Don’t talk to him like that,” followed by, “Don’t talk to me like that.”

“I can’t do anything,” the girlfriend can be heard saying. “You’re hurting her!”

After additional officers eventually arrived at the scene, Selke told Tuggle to “stop protesting”. Tuggle lies on the ground for several minutes while the police handcuff him before helping him lift him off the ground.

“First of all, we understand and respect the prosecutor’s decision and are delighted for his forbearance in proceeding with the charges against Adonis. Regardless of legal considerations, we believe this was an incident that occurred on our premises. very quickly in the specific context of the environment,” Purdue President Mitch Daniels said in a statement. “We believe this is an outcome that no member of the Purdue community should expect in light of our high aspirations for community policing at Purdue, whose primary objective is to ensure a safe and positive experience for our students on campus. is.”

The university president continued: “We are deeply sorry what happened, and we are grateful for the patience of our community as we, with Adonis, Officer John Selke and their families, have a better understanding of what happened that night and a reconciliation.” Has worked to gain the sides of the event.”

“I apologize for the impact of my actions on the night of February 4, 2022,” Selke said. “I have spoken privately with Adonis and his mother, Ms. Cornelia Dawson, to apologize to them. I fully acknowledge that my actions and the images of this incident have raised questions about the safety and belonging of Purdue’s black community.” I’m so sorry for that.”

Tuggle said he is “grateful” for the leadership at Purdue and the “support” he has received in the weeks following the incident.

“I recently had the opportunity to meet Officer Selke and learn more about his background and his family, and understand his own personal history and service in the Army and as a PUPD officer,” he said. “We had a productive conversation, and I am committed to working with him, Purdue Police, my fellow students, and the wider university community to build a positive path.”