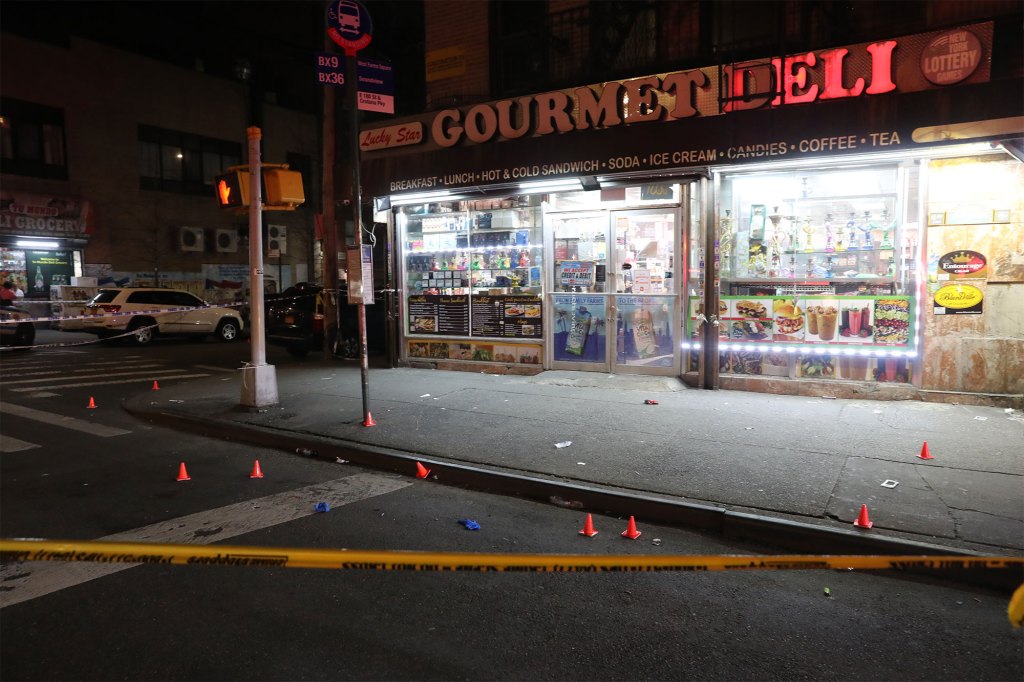 USA Updates ‘No one is safe’: 3 dead, at least 12 injured in a series of shootings in NYC

Police and sources said three people were killed and at least 12 others were injured in a series of shootings Tuesday night in parts of The Bronx and Brooklyn.

The fatal victims included a 23-year-old woman, and two men, 22 and 21, who were murdered in separate Bronx shootings. At least five other shootings were reported in New York City during a nearly six-hour period, officials said.

A 15-year-old girl was among the survivors who were hit by bullets in a shootout that took place just hours after the worst subway shooting in the city’s history, injuring 10 others.

“Another good day. Everyone is on the street, and everyone is being shot,” a Brooklyn cop told The Post. “No one is safe.”

Police said the bloodshed began just before 4:30 p.m. in Bedford Stuyvesant in front of 441 Gates Avenue, which is part of NYCHA’s Armstrong Complex.

The victims were taken to Kings County Hospital in stable condition while police searched for the shooter.

Police said a 15-year-old girl was shot in the leg in front of 3958 Laconia Avenue in the Edenwald section of the Bronx just after 7 p.m.

Police said it was not clear what led to the attack and the shooter fled while the victim was taken to Jacobi Hospital in stable condition.

Three minutes later, a 41-year-old man was shot in the right leg in front of 380 Aetna Avenue in Brooklyn’s Cypress Hill neighborhood, the NYPD reported.

Officials said the uncooperative victim was taken to a Jamaican hospital and the shooter remained in the air.

One person was killed and two others were injured in another triple shooting in The Bronx, at the intersection of East 180 Street and Mohegan Avenue in Crotona, just before 7:45 p.m., according to police.

Wayne Goodwin, 22, was struck several times over his body several blocks from his home and pronounced dead. The NYPD said a 47-year-old man and a 21-year-old were being treated at St. Barnabas Medical Center after they were shot in their legs.

According to police, a man was wounded when he was shot in front of 950 E 86 Street in Kannersee, Brooklyn, at around 8:20 p.m.

Sally Antim, 23, died after being shot in the head at the intersection of Sheridan Avenue and McClellan Street, about 20 minutes later in the Bronx, police said.

Police said it was not clear whether she was the intended victim. The shooter remained at large.

A 22-year-old man was shot in the head outside 3218 Kruger Avenue in the Williamsbridge section of the city at 9:50 pm, police said. There was no hope of survival of the injured man.

At least four more people — three men and one woman — were shot outside 2825 Ollinville Avenue in the Bronx at around 10:10 p.m., police said.

Police said 21-year-old Jesse Bynum was shot in the head and died.

Hours after the bloodshed, Governor Kathy Hochul said gun violence “has to end, and it ends now” following the mass shooting of a lone gunman on Brooklyn subway commuters on Tuesday morning. Authorities said ten people were shot and 19 others were injured, but miraculously no one was killed.

Recent NYPD data showed that major crimes were up 37 percent over the past year, although homicides were down 16 percent compared to 2021.

The violence came two days after Mayor Eric Adams expressed “concern” about an increase in crime during the ensuing hot summer months.