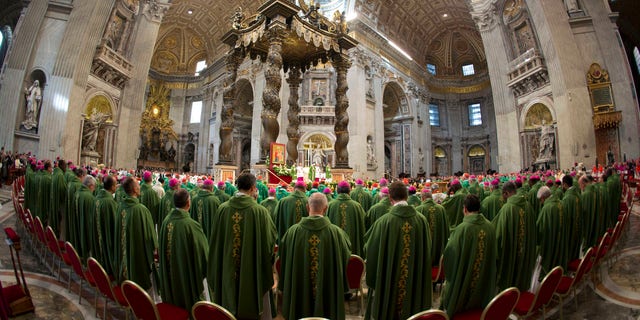 The settlement could be one of the largest ever in the United States involving a Catholic diocese and will allow the plaintiffs to sue insurance companies related to the diocese, as well as schools and parishes, according to The New York Times.

“This settlement with the Bishop of Camden is a powerful advance in accountability,” Jeff Anderson, an attorney representing nearly a third of the 300-some accusers, said. “The credit goes to the survivors for standing up for themselves and the truth.”

In this photo taken with a fish-eye lens Pope Francis celebrates a Mass to mark the end of the Synod of bishops, in St. Peter’s Basilica at the Vatican, Sunday, Oct. 25, 2015.
(AP Photo/Alessandra Tarantino)

The settlement has to go through a bankruptcy court and would pass the 2003 $85 million settlement in Boston.

The alleged abuse, which was not detailed in the filing, occurred between the 1950s and 1990s at the diocese, which encompasses six counties in southern New Jersey on the outskirts of Philadelphia.

The diocese has 62 parishes and around 500,000 congregants, according to the Times,

The diocese had filed for bankruptcy in 2020 after the lawsuits were filed.

The settlement would set up a trust for the alleged victims who could get up to $290,000 each and would require “enhancing” protocols to keep children safe from abuse.

It comes around three years after New Jersey expanded its statute of limitations for filing claims of sexual abuse.

Bishop Dennis Sullivan in a statement Tuesday said he wanted to “express my sincere apology to all those who have been affected by sexual abuse in our Diocese.”

“My prayers go out to all survivors of abuse and I pledge my continuing commitment to ensure that this terrible chapter in the history of the Diocese of Camden, New Jersey never happens again,” he added.