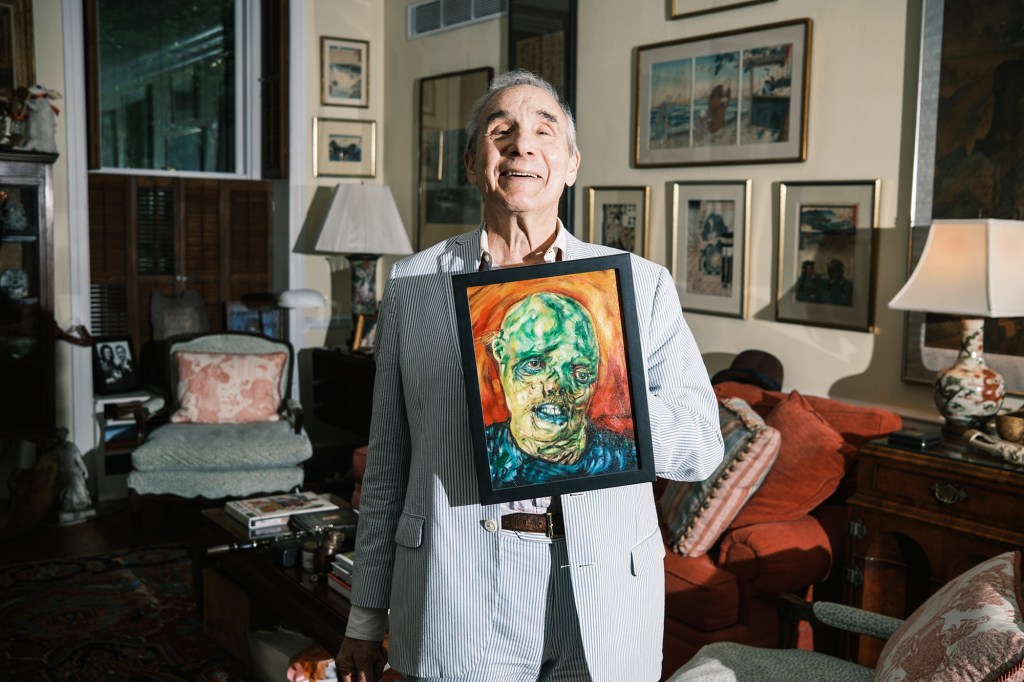 The king of micro-budget shlock-horror has surprisingly classy digs.

In stark contrast to his career championing gross-out exploitation films, Lloyd Kaufman has spent the past 33 years calling a demurely decorated Upper East Side townhouse his home.

The 76-year-old is best known for producing and distributing over 1,000 sex- and gore-heavy movies on pocket change through his film company, Troma Entertainment. But at the end of the work day he goes home to the Yorkville townhouse he and his wife Pat raised their three grown daughters in.

The four-story brownstone is filled with antique wooden furniture and 19th-century millwork accentuated by fine art acquired on the couples’ travels — rich digs for the sovereign saint of comedic limb loss and noxious waste.

Kaufman’s credentials include directing the 1984 cult classic “The Toxic Avenger” (one of Marisa Tomei’s first acting credits), putting Trey Parker and Matt Stone on the map by distributing their 1993 comedy “Cannibal! The Musical” and setting the record for most squibs ever used in a single movie (1988’s “Troma’s War”).

While inexplicable to many, Troma’s brand of excessive violence, politically incorrectness, enormous breasts and slapstick superheroes has proved enduring, and today the company claims to be the world’s longest continuously running independent film company.

“The fans are our secret sauce,” Kaufman told The Post, noting that despite years of notoriety this is the first time he has shown off his home in the press. “They are very active.”

The interior is filled with foreign pottery, family photos and tasteful wallpaper, but there are signs of his hysterical professional identity everywhere: Paintings, portraits, props and stickers of Toxie (left), the wimpy, Jersey-born janitor turned deformed, mop- wielding strongman and protagonist of “Toxic Avenger,” are never far from sight.

“He has so much fan art, we have to cycle it,” said Pat, Kaufman’s wife of 48 years and the longtime former head of the Governor’s Office for Motion Picture and Television Development. “He has to be very selective.”

In the backyard, a rusted outline of Toxie is mounted on a wall, watching over the brick-paved garden from the deck, where Lloyd wrote the screenplay for the sequel “Citizen Toxie.” On the first floor, someone has placed a silicon Toxie head adorned with an “I ‘heart’ TROMAVILLE” bumper sticker over the newel post. And, most curiously to the uninitiated pedestrian, a carving of Toxie’s gargoyle-like head is set above the brownstone’s stoop.

“When Uncle Lloydie called me about that, he explained that it would be above the door of his home forever,” said Josh Turi, the fabricator and former Troma makeup artist Kaufman rang about having the figurehead made.

“And, of course, it had to be Toxie. Toxie is Lloyd’s Mickey Mouse.” (“Who do you think that character is? It’s Lloyd!” Pat once told the Ringer. “Lloyd was the 90-pound weakling. Lloyd is like the superhero fighting for the rights of little people.”)

Neither Kaufman nor Turi — who, like many, credits the prolific director with helping him get a foot into Hollywood’s door — can recall when Toxie was cast in brownstone, and since there wasn’t an invoice they aren’t sure how to confirm, but their best guess is that it was added to the façade a decade ago.

“This was sort of me paying him back for helping me out when I was young — I don’t think I charged him,” said Turi of his gift. “I’ve known that man for a lot of years. You either love him or you don’t get him. Lloyd means a lot to a lot of us out here.”

The Toxie head has elicited a number of doorbell rings over the past 10 years. One person asked if it was Charles Laughton, another if it was Hillary Clinton, and a priest once crossed the street just to inquire.

“I told him that it was the satanic cult, but not to worry, we live for world peace and climate control,” Kaufman laughed, admitting he revealed what it actually is.

While the doorbell ringing isn’t frequent, he says he gets recognized about twice a week, sometimes by people who think he’s Mel Brooks. This suits him just fine. “We’re private people,” said Pat.

Inside, the worldly decor includes both fine art and more eccentric accoutrement, like the elephant mandible Lloyd got while doing volunteer work in Chad and brought back to the US with State Department approval as well as masks from West Africa, framed mola textiles from Panama and a pair of custom horse trophies bearing the couples’ faces, gifted to them by the Mongolian president. A Toxie action figure can sometimes be found riding Lloyd’s horse, and sometimes disappears to other pastures within the home.

The art from trips was mostly picked out by Pat, who also takes credit for putting the house “together.” Most of the family relics are from Lloyd.

“Almost everything is straight out of his mother’s house,” said Pat, gesturing at a Civil War-era dresser. Lloyd’s parents’ former home is just a few blocks away — save his travels and studies at Yale, the splatter film savant has spent almost his entire life on the Upper East Side.

Upstairs is their grandkids’ playroom and their daughters’ old rooms, full of unclaimed childhood knickknacks, Zabar’s bags and Troma tchotchkes.

“Ye olde curiosity shop” Lloyd’s sister has nicknamed their home, it is so packed with curious keepsakes and oddities.

Two films have been shot in the space over the years, as well as countless trailers, interviews and brief clips shot by Lloyd for social media.

Downstairs, they have a rental unit, currently inhabited by a Troma fan.

Before moving into the house in 1987, when Pat was pregnant with their third daughter, they lived on Lexington Avenue, in a one-bedroom apartment they paid $350 a month for.

Kaufman still takes the Q train to Troma’s studio in Long Island City, where the company moved from Hell’s Kitchen some 14 years ago.

The 2020 flick will “probably” be his last, Kaufman says.

A contemporary parody of “The Tempest,” the 94-minute movie is as blood, guts and slime-heavy as any of his previous works, but it’s also loaded with highbrow literary themes.

“That’s what I think makes his movies so wonderful — they’re packed with references,” said Pat, beaming at her partner as he toddled off down their hallway with a large sword.

And just as his films cake lessons learned at Yale in sludge and ridiculousness, his house injects green-skinned vigilantes, improbable heroes and off-color jokes into tony surrounds.

“If the [Toxie carving above my front door] did fall and kill me, that’d be a great way to go. A just end,” joked Kaufman, before quoting Shakespeare. “ ‘And our little life is rounded with a sleep,’ as Prospero says.”