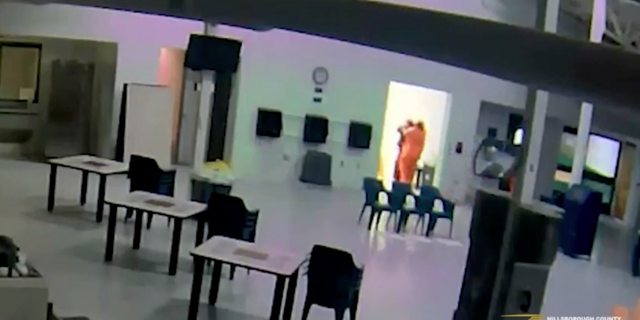 A Florida sheriff’s deputy was allegedly assaulted while in a jail pod as other inmates came to help the law enforcement officer.

On June 7, inmate Bridgette Harvey, 42, approached Hillsborough County Sheriff’s Deputy Lillian Jimenez and told her that another inmate needed assistance in the women’s restroom. While Jimenez was on her way to the restroom to check on April Colvin, 37, Harvey allegedly attacked her.

According to the sheriff’s office, Harvey approached Jimenez from behind and “placed a pillowcase around her neck in an attempt to choke her.”

While the deputy called for assistance from the Emergency Response Team through her radio, other inmates came to her assistance by “removing the pillowcase from around her neck and freeing her from Harvey’s grip,” according to the press release.

A Florida sheriff’s deputy was allegedly assaulted while in a jail pod, and other inmates at the jail came to help the law enforcement officer.
(Hillsborough County Sheriff’s Office)

Harvey confessed to planning the assault after the incident, according to police.

Police say that Harvey was in possession of “a comb that she had sharpened on both ends with her teeth.”

Two other inmates were also removed from the pod, and “all four inmates involved were moved into solitary confinement for the roles they played in the assault,” according to police.