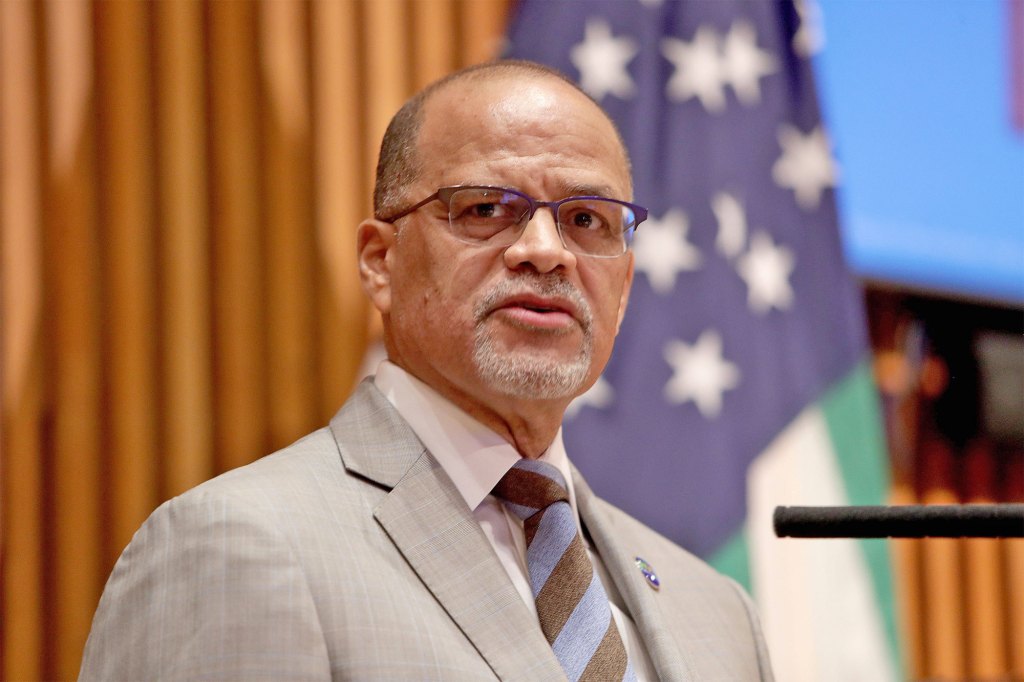 New York City public schools are continuing to lose students in great numbers, with enrollment plummeting by close to 4% since last year, The Post has learned.

The number of students in schools operated by the city Department of Education was just over 919,000 for 2021-22 — a loss of almost 20,000 students since the school year began, according to figures released Wednesday.

The data reflected a longer trend of students and families leaving the school system — including a more than 8% decrease in enrollment since the start of the pandemic.

School officials attributed the decline broadly to the pandemic, as well as population shifts and stalling birth rates.

Chancellor David Banks has repeatedly said that one of the ways he plans to lure parents back to the DOE is by helping them feel heard and respected.

The enrollment figures came as public schools across the five boroughs are facing a collective $215 million reduction in their budgets tied to fewer students in the system.

Mayor Eric Adams on Wednesday continued to insist that right-sizing the budget for current enrollment numbers did not amount to a cut to school funding.

He also said his administration has made steps to attract families back to the public school system.

“We’re doing the things that parents were troubled about,” said Adams at an unrelated press conference in the Bronx. “Gifted and talented programs in every district; we’re going to ensure our schools are safe and we’re also going to create a better experience in our schools.”

“This administration is focusing on giving children what they need,” added Adams.

Michael Rebell, an expert in school funding at Columbia University Teachers College, has encouraged state and local officials to rethink and improve funding formulas so that they are not rigidly tied to enrollment numbers.

“I don’t hear enough people talking about this — we’re living with an outdated formula,” he said.

Rebell added that some of the weights and calculations that go into these funding formulas are flawed and out of date, and could impact schools’ ability to deliver a sound education.

“The state does have a constitutional responsibility to do that,” he said.

All community school districts within the DOE saw a drop, except for District 21 in Brooklyn. Enrollment in 3-K was an outlier, trending upward by 124%, following the program’s expansion.

Overall enrollment has increased by 1.3% this year, according to figures from the New York City Charter School Center, and by 9% since the start of the pandemic for six straight years of growth.

“Families saw charters pivot to effective remote learning immediately after the pandemic hit, while offering a safe, nurturing, and rigorous learning environment with an urgency that the DOE under Mayor de Blasio struggled to provide,” said James Merriman, the center CEO.

This year’s admission cycle doesn’t seem posed to stem the tide for the traditional public schools either.

Still, a record number of students received offers to their top choice schools and programs this year.

Half of applicants to high schools received an offer to their top choice, up from 46% last year. Three quarters of them will receive an offer to one of their top three choices.

At the same time, several parents of top-performers have reported being shut out of their top-choice high schools this cycle, as admissions procedures were changed this year to de-emphasize academic records in response to the pandemic and increase diversity.

Black and Latino students received 23% of offers to Townsend Harris High School, up from 16% last year. More than double the percent of offers to Millennium Brooklyn High School went to black and hispanic students — from 20% to 43%.

Officials restated their commitment to an “iterative process” on Wednesday, with more opportunities to provide feedback and improve the process in future years.

“We are grateful to the many families who have given us feedback on how to make admissions simple, easy, and intuitive for families,” said First Deputy Chancellor Dan Weisberg — adding the DOE has already made “family-friendly changes” like extending school waitlists until mid-September.

“This is part of our commitment to rebuilding the trust of families and reversing enrollment declines in the coming years,” he said.

Officials also said the department would respond to families of children who did not receive offers from schools listed on their applications, including information sessions and teams on call to answer questions via email.

“We see this as an opportunity to continue to innovate and tirelessly work towards ensuring our public schools are destinations for high quality learning, and a beacon for families across the country,” said Weisberg.