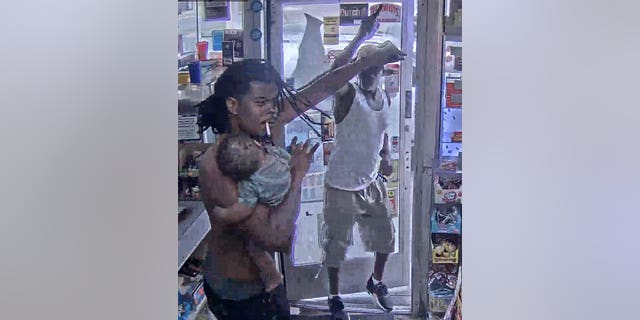 Detroit police are seeking information on an armed suspect seen in a shocking video drawing a gun on a man seen holding a baby inside a gas station convenience store this week.

The Detroit Police Department’s 2nd Precinct on Monday shared still images and video related to an aggravated assault investigation stemming from an incident that happened at approximately 5:50 pm Sunday at a gas station located on the corner of Hubbell and Tireman.

The video showed the suspect, wearing a tan bucket hat and a white A shirt, walk with both hands visible toward the gas station from a nearby sidewalk. He passed through the lot by another man who just finished pumping gas and gets back into his SUV without acknowledging the suspect walking by.

Once reaching the convenience store, the suspect opens the door and pulls out a gun from his waistband.

Video taken from a different vantage point inside the store shows the suspect point the firearm at a man standing just between two and three feet away with a baby sleeping on his shoulder.

The man, with a cigarette hanging from his lip, reacts quickly, throwing his arm up and attempting to grab the gun. The suspect, still holding the gun, backs out of the store and is seen standing in the lot fiddling with the weapon.

FOX 32 Chicago reported that investigators believe the man’s quick thinking and brief blow to the gun might have caused the weapon to stall.

The outlet also reported that the baby is just 7 months old, and police believe both men had separately walked to the gas station following an argument. The suspect fled the scene.

Detroit suspect in bucket hat and A-shirt seen at gas station before drawing a gun on a baby inside holding a 7-month-old baby.
(Detroit Police Department’s 2nd Precinct. )

“We are attempting to identify a suspect in an aggravated assault,” a tweet from the Detroit Police Department’s 2nd Precinct Commanding Officer Michael Chambers said. “If you recognize the suspect with the tan bucket hat and white A-shirt, please contact Detective Rice 313-596-5240 or call 1-800-SPEAK-UP.”

Danielle Wallace is a reporter for TOU Digital covering politics, crime, police and more. Story tips can be sent to [email protected] and on Twitter: @danimwallace.