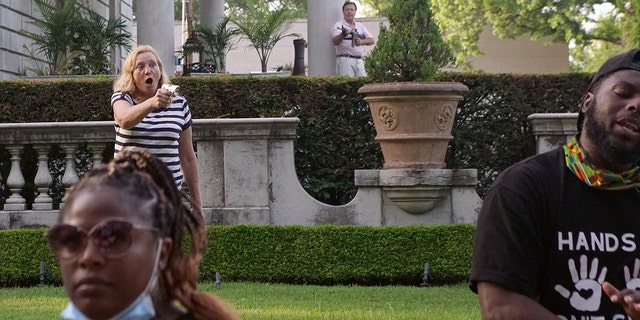 The US Supreme Court declined to hear a case from Mark and Patricia McCloskey, who were hoping the high court could overturn an earlier decision that placed their law licenses on probation after they pointed guns at protesters outside their home in St. Louis. Louis in 2020.

“I was a little disappointed because I thought the concept of a lawyer being sanctioned for doing no more than just defending himself and exercising his Second Amendment rights would be an issue that the Supreme Court might find significant,” Mark McCloskey said after the decision. was announced Monday.

FILE PHOTO: Patricia McCloskey and her husband Mark McCloskey draw their firearms on protestors as they enter their neighborhood during a protest against St. Louis Mayor Lyda Krewson, in St. Louis Louis, Missouri, US June 28, 2020
(REUTERS / Lawrence Bryant / File Photo)

The Missouri Supreme Court initially suspended the McCloskeys’ law licenses in February 2022, after the couple pleaded guilty to the misdemeanor charges. The couple was subsequently fined and the state supreme court delayed the suspension and placed the two licenses on probation for one year.

Mark and Patricia are still allowed to practice law in the state, but a probation violation would cause the suspension to go into effect.

MCCLOSKEYS PUT ON PROBATION AS ATTORNEYS BY MISSOURI SUPREME COURT

The couple must also provide 100 hours of free legal service, per the state supreme court’s decision.

MISSOURI HEARING HELD ON MCCLOSKEYS BID TO GET THEIR GUNS BACK

The McCloskeys made news headlines during the 2020 racial riots when they claimed they felt threatened by protesters outside of their Missouri home. In June of that year, both Mark and Patricia waved guns at the protesters during the incident.

No shots were fired in the incident, but the case was thrust to national attention as some people backed the protesters’ freedom to protest under the First Amendment, while others supported the McCloskeys arming themselves under the Second Amendment.

Former President Donald Trump and other high-profile conservatives have expressed support for the McCloskeys.