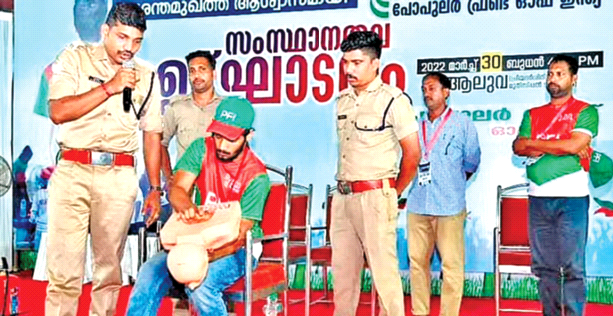 Training to PFIs given by government officials

Kerala Often in discussion due to controversial and heartbreaking events. This time, the Kerala government is embroiled in controversy due to the training given by the officers of Kerala Fire and Rescue Services on the occasion of the inauguration of the state level rescue and relief program organized by the hardline jihadi organization Popular Front of India (PFI) in Aluva (Anarkulam). Is.

The involvement of PFI cadres in many incidents of violence is well known. Chargesheets have been filed against several members of PFI in various cases. There are many criminal cases registered against him along with treason. The National Investigation Agency (NIA), Enforcement Directorate (ED) and state police are investigating several cases. The Social Democratic Party of India (SDPI), the frontal organization of PFI, had also staged demonstrations in several places in India against the Citizenship Amendment Act (CAA). In the days leading up to the protests, Kerala Chief Minister Pinarayi Vijayan had said that the SDPI was using the CAA protests to divide the people. It is noteworthy that in view of PFI’s involvement in violent activities, it has often been demanded to ban it.

Despite PFI-SDPI’s anti-national and anti-social activities, Kerala Fire and Rescue Services officials conducted training for PFI members on March 30 at Aluva Priyadarshini Municipal Auditorium. Sources said that Kerala Police has trained several cadres of PFI for fire and rescue operations. However, according to the existing rules, participation of firefighters in political and religious programs is prohibited. Nevertheless, officials of Kerala Fire and Rescue Services participated in this political event. By whose permission?

PFI-CPI (M) alliance
Kerala BJP president K. Surendran has tweeted to Home Minister Amit Shah that PFI and SDPI are involved in many terrorist activities. And the Pinarayi Vijayan government is giving special hospitality to these jihadists. The fact is that the actions of PFI are very similar to the appearance of jihadi terrorists. Another fact is that the Vijayan government is engaged in building its dominance with the support of PFI. The CPI (M) has a long history of alliance with PFI in terms of opportunistic politics. Currently, the Kerala government is playing the game of suspending policemen training PFI cadres.

Concerns of local people
One of the reasons for the apprehension is that speaking at the state level training function for ‘disaster relief and rescue’, the Secretary of State for PFI said that rescue and relief workers were prepared to ‘save the country from other challenges’. Should go This statement has caused a great deal of criticism. It is being said that the meaning in ‘other challenges’ is really ‘meaningless’ and communal. PFI is never in favor of helping anyone other than Muslims. From his actions, some locals are comparing Kerala with Kashmir and in the guise of disaster, horrific incidents of genocide of Hindus are being feared.

National Investigation Agency (NIA), Enforcement Directorate (ED)
And the state police is investigating several cases.
Front Democratic organization of PFI Social Democratic
Citizenship by the Party of India (SDPI)
Opposing the Amendment Act (CAA)
He also performed in many places in India.
Kerala Chief Minister in the days of protests
Pinarayi Vijayan had said that SDPI
CAA to divide people
Is using protest.

It is also being reported that the training was carried out by Islamic militants in Kashmir. While in Kerala, the police itself is imparting training to the lunatics suffering from terrorist mentality. The only difference is that Hindus were trained to kill in Kashmir. Here training is being given for big conspiracy under the guise of rescue and relief. Considering the actions of religious fanatics, the mentality of capitalizing on opportunities in a disaster can be easily inferred. Also why are the locals so apprehensive of good or bad?

It is known that the activities of PFI are not suspicious, but very clearly jihadi terrorists. It is clear that their goal is to make India an Islamic nation as soon as possible. As such, there is an atmosphere of fear among the locals that if such people would take part in rescue operations during the epidemic, it would not even be known how many people died due to the epidemic and how many were killed at the hands of these religious fanatics? Look at the irony that the advertisement banner of this state level program of PFI is inscribed – rescue and relief in disaster! While mysteriously it is pointing towards ‘opportunity in disaster’.

Infiltration of Kerala Police
According to sources, another reason for fear among the locals is that there is a group of religious elements recruited in the Kerala police called ‘Pachcha Velicham’, i.e. green light. The group was previously active only in Kerala. Now it is being told that these days it has reached the entire country. These people alert the PFI relief workers trained in camps like above during the disaster, so that they can carry out their work before the police and relief workers reach the disaster sites. A reasonable question from local sources is whether the Home Ministry is aware of such groups.

It may be recalled that the Sufi Islamic Board had also underlined PFI’s involvement in terrorist activities. In this case, the central agencies need to be vigilant. A few years ago, it was pointed out that Kerala police are recruiting people with religious jihadi mentality, which can prove fatal in time. Here, a few months ago, the active participation of the police in giving the list of Sangh-BJP workers to PFI has become clear. Due to such incidents, Kerala Police is in the realm of suspicion in the eyes of the people.

Incidentally, a 2010 incident is noteworthy for knowing and understanding the mindset of PFI. Joseph, a Malayalam professor at Newman College, Thodupula (Idukki), had prepared a question paper for the internal examination, in which Prophet Muhammad was allegedly insulted. As a result, PFI activists cut off his right hand in front of his family. It is noteworthy that Professor Joseph and his family were returning from church. It is learned that the NIA court (Kochi) had found 13 accused guilty in a sensational case related to amputation of a professor’s hand. All the accused were PFI cadres. While five other accused including the main conspirator had absconded. This is the behavior and character of PFI.

Even in this post-modern time, in India, the teacher (guru) has the highest position after the parents. As such, the attitude of PFI members towards a teacher, full of religious frenzy, is worrisome. The training given for service work (rescue and relief) is in stark contrast to the heartbreaking incident of Professor Joseph’s brutally amputated hand. Public protection and public welfare can never be expected from those who have religious frenzy in their minds. By no means do I want to convey that I recommend for the mother to be inactive.