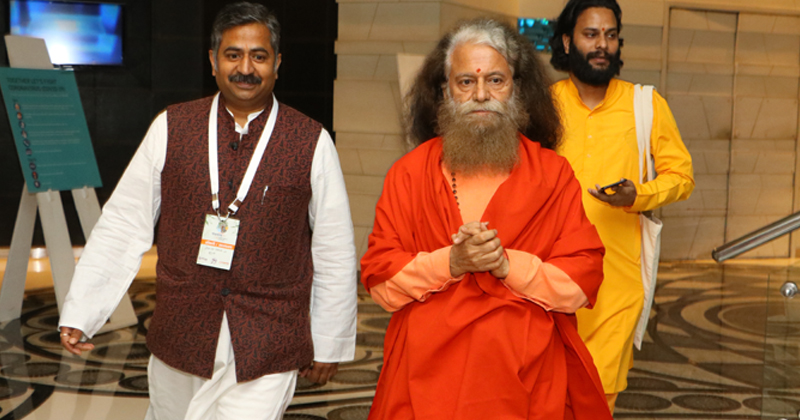 Time has come to see India through India’s eyes, take a pledge to plant trees on your birthday: Swami Chidanand Saraswati

Swami Chidanand Saraswati ji gave his views in the environmental dialogue organized by Panchjanya and Organizer in Delhi. He appealed to adopt and promote the laws of India.

Swami Chidanand Saraswati ji said that the topic which is most important today is being contemplated and churned. Gadkari ji was talking about water that the car would run on water. Water is the next fuel. There will be a stock market for water. Will buy now and sell after 20 years. That’s why we have discussed it here in Rigveda long back. Since then the latest work is by Swami Tulsidas. Let us teach our children about water in a scientific way. I think in the coming ten years this same bottle of water will cost up to three hundred rupees.

He said that in ten years, drinking water in India will be reduced to half of what it needs. In twenty years half of the water in the world will be left. If there is water, there is Ganga, then there is Kumbh and there is Prayag. Water is everything. From the Vedas till today, it has been said that this body is made up of five elements. We have five elements in God.

He said that it is time to save water. I asked the religious leaders to know the importance of water. Swami Chidanand ji also discussed that he had a discussion on environment with Shri Mohan Bhagwat. Shri Mohan Bhagwat ji also discussed the environment in Ubhodan from Nagpur on Dussehra. We all should think about the environment. Talking about India, the time has come to see India through India’s eyes. I would say that there is no sorrow for the one who is lost, but what is left is not less. Today Panchjanya needs to be played with a new perspective. Today again Panchjanya has to be played. Panchjanya was played in Kurukshetra, where Mahabharata happened. Today again Panchjanya will ring. Now it’s time to make a great India. Journey from Mahabharata to Mahabharat. Panchjanya was also playing there. It used to play in Kurukshetra, but now it will ring in every house.

He said that now there is strong leadership. Now there is a cultured government. The Prime Minister is giving vision to the whole country. India’s culture is leaving its mark abroad. When Prime Minister Narendra Modi gave a speech in Madison Square for the first time. Everyone saw that scene. For the first time, I saw such respect for the head of a country. It is the fortune of this country that this country has got a fakir. Swamiji said that today again the time of Panchjanya has come. Preservation of Panchjanya Samskaras. Culture and environmental protection. Government, society and institutions should all work together. Every ashram every institution should be innovative.

He said boycott plastic. Use Indian methods. Make a resolution together. Plant a tree on your birthday. We request that a program of Panchjanya should be done on the banks of the Ganges.