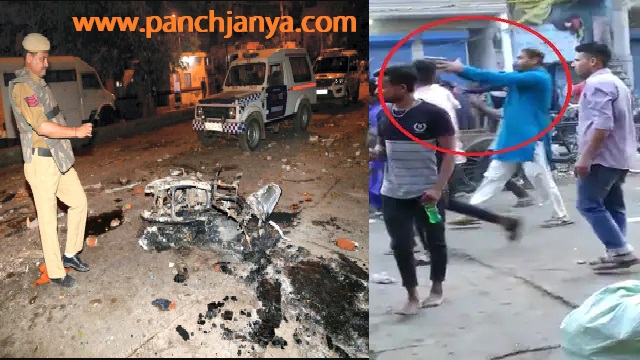 On Saturday evening, during the Hanuman Jayanti procession in Jahangirpuri area, individuals, women and children of a special community formed groups on the roof of their house and on the road and suddenly attacked dozens of people and policemen with stones and bullets. And severely wounded by sharp weapons. Some shops were also looted in the incident. The offenders were seen rioting by instructing each other in Bengali. For about an hour the thugs attacked the devotees involved in the procession.

Devotees were seen trying to save themselves in the video of the incident, but when they felt they could not escape. After which he started throwing stones at her by thugs. An FIR was registered at 10.40 am on the statement of Inspector Investigation Rajiv Ranjan in the case, police officials said. The case has been registered under section 147/148/149/186/353/322/307/323/427/436/27 of IPC.

“I was deployed on Hanuman Shobha Yatra with my police team,” Inspector Investigation Rajiv Ranjan said in a statement in the FIR. He was monitoring the situation. The procession went on peacefully. Shobha Yatra started from E Block Jahangirpuri at 4.15 pm and was to end at Babu Jagjivan Hospital Road Block, BC Market, Kaushal Chowk, G Block, Mangal Bazar Road, Mahindra Park, One Motors Mangal Bazar Road, Mahindra Park.

Shobha Yatra was going on peacefully. But when Shobha Yatra reached C Block Jama Masjid around 6 pm. A young Ansar came with four or five of his companions and started arguing with the people involved in the procession. Excessive discussion led to stone-throwing from both sides, which led to a stampede in the procession. He tried to keep the peace with his team by separating the two parties after a lot of struggle, but after a while suddenly again arguments and stoning started between the two parties.

Seeing the situation deteriorating, he called the police force immediately after reporting the matter to the control room. Top officials also rushed to the spot and repeatedly appealed to the people to keep the peace. But on the one hand, despite being told, he was being stoned. 40 to 50 level shells were fired to control the uncontrollable situation. The people were dispersed. Meanwhile, a bullet was fired between the stones from the side throwing stones.

One bullet hit Sub-Inspector Megha Lal in the left hand. 6-7 policemen and a young man were also seriously injured. Meanwhile, a Scooty was set on fire by a mob. Four to five parked vehicles were also damaged. The procession was riddled with stones and gunfire by some anti-social elements. Peace was disturbed and private property was set on fire and police and people were harmed.

These people fell prey to thugs

Top police officials met everyone and praised them for trying to make peace by playing games on their souls. Police took information from everyone about the timing of the riots. His statements were also recorded.

Security was beefed up in the Jahangirpuri area on Sunday

Security was put on high alert after several people, including Delhi Police personnel, were injured in communal violence between two groups of people in the Jahangirpuri area on Sunday. On Sunday morning, Delhi Police along with locals launched a flag march in the area. At the same time, senior officials and the forensic team and crime team arrived at the scene and collected evidence. Meanwhile, no politicians or people from political parties were allowed to enter the riot zone.

People were being evacuated after seeing them gathering in groups. Attempts are also being made to gather evidence from them and interrogate the rioters. Most of the senior Delhi Police officials, including the Special Commissioner of Police (CP), Law and Order, New Delhi, Dipendra Pathak, were present at the scene of the violence while filing the report. The Special CPA said the situation is now peaceful and under control.

Police officials said Ansar was the instigator of the riots, while Aslam, a young man, opened fire on the policemen. Both live with family in Jahangirpuri area. Aslam was also involved in a criminal case in 2020 and came after serving his sentence. A pistol used in the crime has also been seized.

Police are trying to get more information about him. Police officials said he was named as the main accused on the basis of evidence obtained from Inspector Rajiv Ranjan and videography of Ansar. The suspects have also been arrested on the basis of more than 100 video footages found. All the accused are residents of Jahangirpuri.

Officials appealed to the public, including the peace committee

The senior official appealed to the people of the area to maintain peace in the area. In this regard, all the top police officials also held a meeting with the peace committee and the locals. He was told to stay away from any rumor and tell the police about the rumor monger. He was asked to co-operate in the investigation and report the scoundrel to the police.

He was assured that the scoundrels would not be spared and no innocent person would be trapped. He assured them that rumors were being spread that the police had ignored the procession and that there was not enough police force. Rumors are being spread that all this is wrong. He said police along with paramilitary forces could also be seen patrolling the area after the incident.