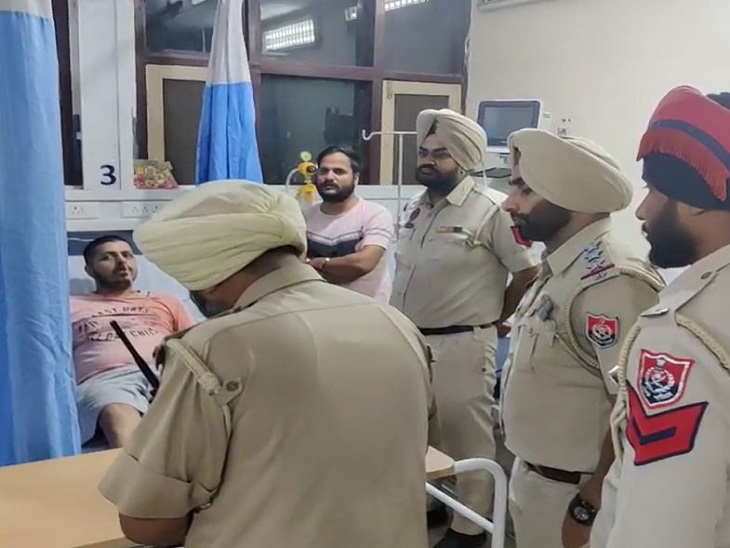 Suicide attempt to be live on Facebook: Attack happened eighteen days ago, was hurt due to lack of justice, said – the attackers are roaming freely

SHO Navdeep Singh and other police personnel recording the statement of the youth who attempted suicide.

Some people assaulted the young man. He got ten stitches on his head. But the police made the case weak and did not arrest the perpetrators. Hurt by this, a young man from Jalandhar tried to commit suicide by going live on Facebook. He named everyone in his own Facebook Live and told why he is going to commit suicide. However, people saw him after being live and immediately rushed him to the Civil Hospital, Jalandhar. where he is presently under treatment.

The young man has been kept on observation by the doctors in the hospital so far. The mental condition of the young man is also not feeling well. Gagan has said in live that he does business of finance. He had given money to someone. He was not returning his money. When he asked for the money back, they beat him up. His relatives were also involved in this fight. They have grabbed his property. The youth said in his suicide video that the attackers killed him so much that they left from there knowing him to be dead. But after regaining consciousness, he somehow reached the hospital. He has got ten stitches on his head. There are two stitches on the front of the head and eight stitches on the back.

youth under treatment in civil hospital

He took his complaint to the police post Surya Enclave. There the policemen did not take his complaint seriously. He made a weak case of 323 despite having eight stitches. Whereas this case was directly related to 307 (intention). Even if the intention was not to make the murder, the police should have registered a case of 325-326 (serious injuries) in view of the way he has suffered injuries.

However, the police reached the hospital and took the statement of the youth. Police officials say that they will get the whole matter investigated as to why the youth was forced to commit suicide. If the youth is wrong, then legal action will be taken against him also.

All allegations are false: SHO

SHO Navdeep Singh had come to the hospital to take the statement of the youth who committed suicide. He said that on the date on which this incident took place, he was not even posted there. He has signed in Thana Rama Mandi on April 1. The youth who attempted suicide is lying, he is not feeling mentally well anyway. He said that if he did not get justice at police post Surya Enclave, he would investigate it. Its MLR will check whether there is any merit in its allegations. If the allegations of the youth turn out to be true, he will take action against the investigating officer as well as reshuffle the case.