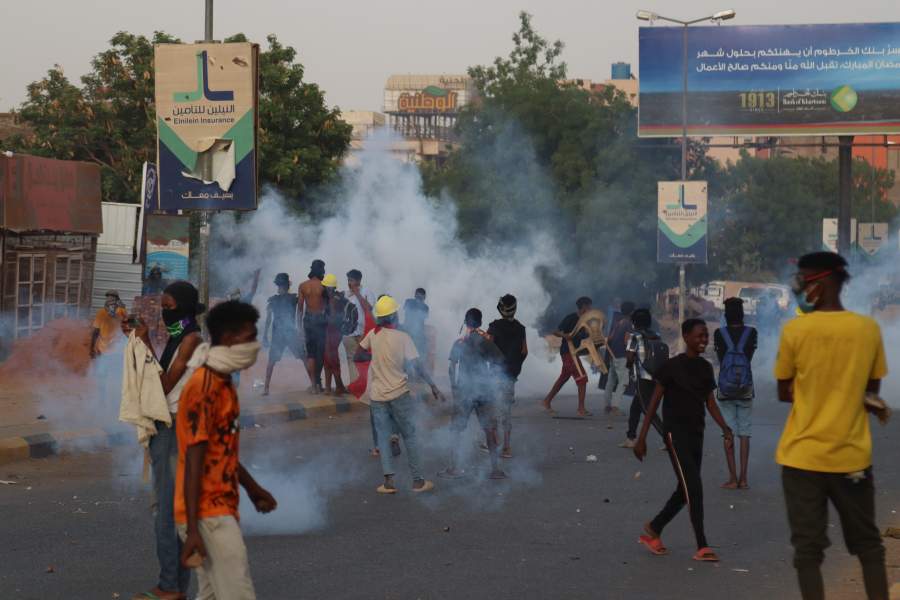 Sudanese Revolution Is Not Over: People Will Fight Until the Military Regime Falls – The Geopolitics

Flags with portraits of martyrs proudly held high in the sky, men and women fearlessly chanting their demands surrounded by clouds of tear gas, people sharing shields to hide from bullets fired by the military; Sudanese are still fighting for their rights, freedom, and dignity.

In April 2019, following months of unrest and mass protests, demonstrators managed to oust long ruling dictator Omar al-Bashir. After that a transitional government was formed. It foresaw the military ruling for a while before passing the power over to civilian leadership. But as the bitter events of this past October showed, the army was never committed to following through on these promises.

Instead, one month before the planned completion of the transitionary period, the army led by Abdel Fattah al-Burhan staged a military coup, crashing people’s dreams of a democratic Sudan.

But the Sudanese did not remain silent. Yet again they took to the streets and for the last eight months the country’s capital, Khartoum has been seeing weekly protests, regularly met with extreme violence perpetrated by security forces.

“Since the anti-coup protests began, the military has killed ninety-nine people,” said Usman, a twenty-three year old activist. “Almost everyone who comes to these events has lost someone they loved,” he added pointing at someone’s keychain with a face of a young man who got killed during one of the protests.

I met Usman during the June 6 demonstration where I got to witness the military’s excessive brutality.

Sudanese opposing the coup mobilize on social media and while there are certain parts of the city where protests usually take place, sometimes leaders of the resistance announce a new spot shortly before the beginning of the event to mislead the security forces.

I reached the place of the protest around one in the afternoon and shortly after my arrival people started to block the streets using bricks and concrete blocks. At first, the demonstration was relatively organized and calm. People were singing political songs, making noise, and stopping cars to draw their attention to what was happening. Suddenly, just as someone said “I do not think we are going to be attacked today,” people started running and I saw what looked like thick fog; The police came and started throwing tear gas canisters at us.

The next thing I knew, I was hiding behind a shield while protesters were countering policemen with rocks. As the demonstration grew, several hundred people started marching towards a local police station. With tens of tear gas canisters crossing the sky at any given time, security forces dropping sound bombs, and protesters burning tires to disorient their aggressors, the clashes intensified.

Eventually, police opened fire on the crowd. It seemed as if this time they were just trying to scare us rather than actually target anyone, but still, the risk of getting hit accidentally was high. Earlier that day I met a nursing student who had gotten shot in the leg at a demonstration that took place one week before this one.

Accordingly, people started to disperse. Before the situation escalated I talked to a twenty-one year old girl called Amani and I asked her how long she thought people were going to oppose the military government.

“We, as the resistance, will not compromise or negotiate. The protests will continue until we overthrow the coup and achieve the goals of the glorious revolution of December 2018, ”she said without hesitation.

Tangible progress might not have been achieved that day but we all stood together, united and hopeful. As the protest was drawing to a close and the sun was starting to set, I was sitting on the ground surrounded by Sudanese protesters. Although exhausted, covered in sand, and red-eyed due to tear gas, everyone was smiling and shaking hands.

In this moment I realized that what Amani had said was true; Sudanese people will not give up until the military regime falls.

* Katarzyna Rybarczyk is a Political Correspondent for Immigration Advice Service, an immigration law firm based in the UK but operating globally. Through her articles, she aims to raise awareness about security threats worldwide and the challenges facing communities living in low and middle-income countries.