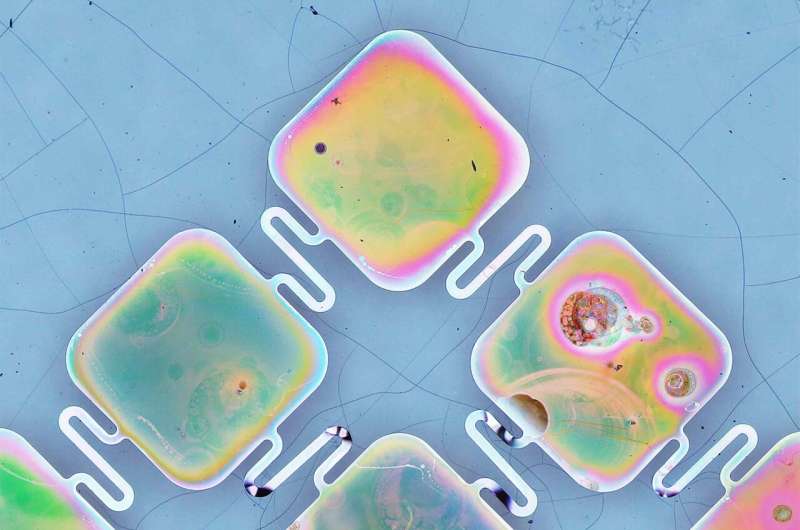 Sponge-like solar cells could be the basis for better pacemakers

Holes help make sponges and English muffins useful (and, in the case of the latter, delicious). Without holes, they wouldn’t be flexible enough to bend into small crevices, or to sop up the perfect amount of jam and butter.

In a new study, University of Chicago scientists find that holes can also improve technology, including medical devices. Published in Nature Materials, the paper describes an entirely new way to make a solar cell: by etching holes in the top layer to make it porous. The innovation could form the basis for a less-invasive pacemaker, or similar medical devices. It could be paired with a small light source to reduce the size of the bulky batteries that are currently implanted along with today’s pacemakers.

“We hope this opens many possibilities for further improvements in this field,” said Aleksander Prominski, the first author on the paper.

Prominski is a member of the lab of University of Chicago chemist Bozhi Tian, ​​which specializes in creating ways to connect biological tissue and artificial materials — such as wires to modulate brain signals and surfaces for medical implants.

One of the areas they’re interested in is making devices that can be powered by light. We’re most familiar with this technology in the form of solar cells, but they can also use any light source, including artificial ones. When operating in the body, such devices are known as photoelectrochemical cells and can be powered from a tiny optical fiber implanted in the body.

Normally, solar cells require two layers, which can be achieved either by combining the silicon with another material such as gold, or by mixing different kinds of atoms into each silicon layer.

But UChicago scientists in the Tian lab found they could create a solar cell out of pure silicon if they made one layer porous, like a sponge.

The resulting soft, flexible cell can be less than five microns across, which is about the size of a single red blood cell. It can then be paired with an optical fiber, which can be made as thin as a strand of human hair — significantly reducing the overall size of an implant, making it more body-friendly and less likely to cause side effects.

The porous cell has multiple advantages over the ways to manufacture traditional solar cells, streamlining the production process while maintaining the efficacy of the final product.

“You can make them in a matter of minutes, and the process does not require high temperatures or toxic gases,” said Prominski.

Co-author Jiuyun Shi said, “When we measured them, we saw the photocurrent was really high — two orders of magnitude higher than our previous designs.”

Then, to boost the material’s ability to stimulate heart or nerve cells, they treat it with oxygen plasma to oxidize the surface layer. This step is counterintuitive for chemists, because silicon oxide most often works as an insulator, and “you do not want the photoelectrochemical effect to be impeded by any insulating materials,” said Tian. In this case, however, oxidization actually helps by making the silicon material hydrophilic — attracted to water — which boosts the signal to biological tissues. “Finally, by adding a few-atoms-thick layer of metal oxide, you can further enhance the device properties,” said Pengju Li, another study co-author.

Because all of the components can be made to be biodegradable, the scientists can imagine the technology being used for short-term cardiac procedures. Instead of a second surgery for removal, the parts would degrade naturally after a few months. The innovative approach might also be particularly useful for a procedure called cardiac resynchronization therapy which seeks to correct arrhythmias where the right and left chambers of the heart do not beat in time, because the devices could be placed in multiple areas of the heart to improve coverage .

Prominski is also excited about possible applications for nerve stimulation. “You could imagine implanting such devices in people who have chronic nerve degeneration in the wrists or hands, for example, in order to provide pain relief,” he said.

This novel way of making solar cells could also be of interest for sustainable energy or other non-medical applications. Because these solar cells are designed to work best in a liquid environment, UChicago scientists think they could be used in applications such as artificial leaves and solar fuels.

Tian’s team is working with cardiac researchers at the University of Chicago Medicine to further develop the technology for eventual use in humans. They are also collaborating with the UChicago Polsky Center for Entrepreneurship and Innovation to commercialize the discovery.