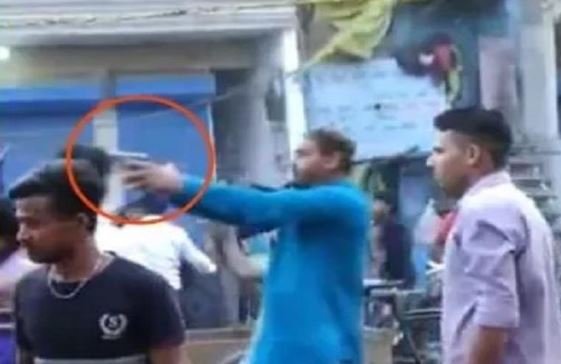 Delhi Police has arrested Sonu Chikna alias Imam, who fired in the violence during the procession in Jahangirpuri, Delhi on the occasion of Hanuman birth anniversary. When the police had gone to interrogate his wife this morning, the police team was pelted with stones.

According to the police, on April 17, a video went viral on social media in which a man (in a blue kurta) was firing during the violence in Jahangirpuri area on April 16. The police team had gone to search his house on CD Park Road. In retaliation, his relatives pelted stones, action is being taken. One person has been taken into custody. The situation is completely under control. After this Sonu alias Imam alias Yunus got caught by the police.

Sonu alias Imam alias Yunus was brought to Jahangirpuri police station in Delhi. On April 16, his video went viral on social media after he opened fire during the riots in Delhi’s Jahangirpuri area. pic.twitter.com/3hYIxXH0Af

Stone pelting on police in Jahangirpuri

The police team had gone to take custody and interrogate the wife of Sonu Chikna, the accused who fired in the Jahangirpuri violence. During this, bricks and stones were thrown at the police team from some houses. Sonu Chikna is absconding. His brother Salim has been arrested. After this incident, RAF has been deployed in the area.

No facts about flag waving at mosque: Police Commissioner
Delhi Police Commissioner Rakesh Asthana said on Monday that the communal violence in Jahangirpuri started with a petty debate. There is no fact in the claim of one of the parties related to putting up the flag on the mosque. He said in the press conference that the police is investigating from every aspect. All those directly and indirectly involved in this violence will not be spared. People from both the sides have been arrested in the case. Police will not discriminate on the basis of caste, religion, creed and affiliation. Everyone involved in the incident will be arrested.

He said that so far 23 people from both the sides have been arrested in the case. Nine people including policemen and a civilian are injured. CCTV footage and digital media are being analysed. 14 teams of Crime Branch are handling the case. 14 teams of Central Armed Police Forces are deployed in sensitive areas. This deployment will be there till the situation becomes normal. The Commissioner of Police has appealed to the public not to pay heed to rumours. Some people are trying to disturb the peace through social media. Police is keeping a close watch on social media and legal action will be taken against those spreading misinformation.