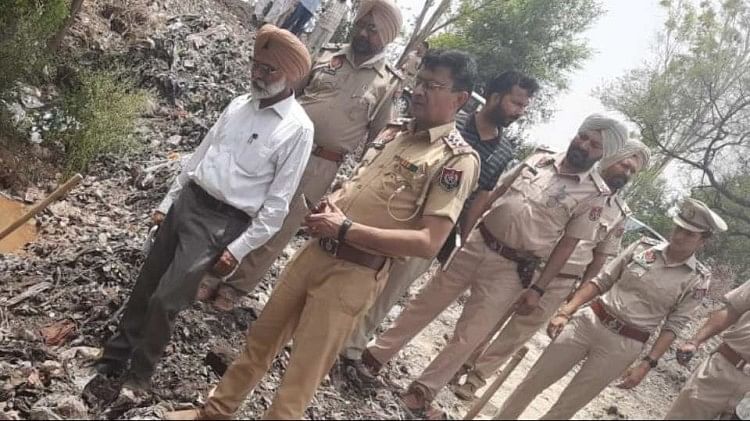 In Patiala, Punjab, the police have solved the mystery of finding an Alto car covered in blood and the disappearance of its owner within 24 hours. According to the police, the youth of the car owner was murdered and this incident was carried out by the youth’s wife along with her lover. Both have been arrested by the police and on their behest, the dead body of the youth has been recovered in the presence of the magistrate by digging it in a garbage dump near village Noorkhedian on Ghannaur road.
this is the whole matter

On the basis of information, the police had recovered an Alto car covered in blood from near Urban Estate Phase-II in front of Tikoni Market. The car owner’s father Baldev Singh, resident of Balbir Colony near village Chaura, who reached the spot, told the police that the car belonged to his son Kasim Mohammad (32), who works as a supervisor in a car company in Panchkula.
He had left the house in his car at around eight o’clock on Saturday night saying that he was going to his friend’s party. Later he did not return home and his mobile was also switched off. During the search for Qasim Mohammad on Sunday, his car was found near the Urban Estate Phase-II area of ​​Patiala. Qasim Mohammad was not in the car and there was a lot of blood on the driver’s side rear window and inside the car. In this case, the police registered a case against unknown persons for kidnapping with the intention of murder and started investigation.
The accused used to give milk in the house

SP (countryside) Mahitab Singh said that during the investigation it has come to the fore that Razia Begum, wife of missing Qasim Mohammad, had a relationship with Sukhdeep Singh, a resident of village Noorkhedian for the last three-four years. Actually, Sukhdeep Singh used to pour milk in his house and the children of both also studied together.
The two hatch a murder plot to remove Qasim Mohammad from their path. Calling Qasim Mohammad on the pretext, the accused killed him by hitting him with a dagger in the car itself. Later his body was buried by the accused in a garbage dump near his village Noorkhedian. Police have recovered the dead body on the behest of the accused. The accused will be produced in the court and their remand will be obtained, so that it can be found out whether someone else is involved in the incident or not.