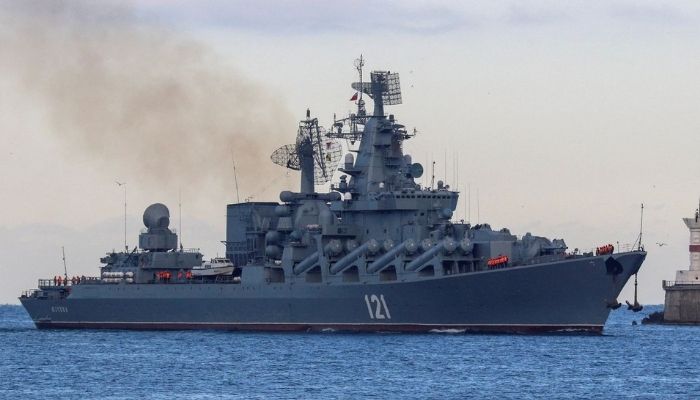 Russia said it would happen soon Towing The Black Sea flagship returned to port after extinguishing a fire on the Moscow board. Ukraine had earlier claimed that the missile had collided with a cruiser Neptune missile and sank. But now the Russian Defense Ministry has said the ship is still floating and the main weapons on board are still safe.

Accordingly Report According to Sky News, the crew on the Moscow ship were moved to several other ships nearby. The Russian Defense Ministry also confirmed that the ship was damaged, although it did not say whether it was damaged by a missile attack by Ukraine. “As a result of the fire on the Moscow missile cruiser, the ammunition exploded,” the Tass news agency quoted the Russian Defense Ministry as saying. The cause of the fire, however, was not immediately clear. The ministry said it was still investigating the cause of the fire.

The ministry said the ship’s fire was caused by ammunition on board and the fire was contained and the explosion of ammunition was also stopped.

The ministry later said that the source of the fire in Moscow was under control. The explosions have stopped. ” They further added that “the fire on the cruiser Moscow has been localized”. Citing ministry officials, the RIA Novosti news agency said the ship was maintaining vigor and its main missile weapons were not damaged in the incident. The ministry added that efforts were underway to tow the cruiser to the port of Sevastopol.

Earlier, Ukrainian officials said they had attacked Moscow with 2 anti-ship Neptune cruise missiles off the coast between Odessa and Nikolayev, and that Moscow was now sinking. However, there were conflicting versions of Ukraine’s claims, because when the regional administrator of the state of Odessa claimed that it had been hit by Ukrainian missiles, Alexei Arestovich, an adviser to Ukrainian President Volodymyr Zelensky, said there was no fire and no ship. .

“There is a big fire. The sea is stormy so it is unknown whether it will be possible to get their help. There are 510 crew members. We do not understand what happened, either the two sailors were smoking in the wrong place, or once again certain safety measures were violated, “Arestovich told CNN. Report. The latter, however, he had Tweeted That the ship has sunk.

According to ReportsEven the Pentagon is not sure what happened to the ship. A Pentagon spokesman, John Kirby, said there had been “an explosion” on the ship, but the United States could not immediately determine whether the ship had been hit by a missile. “We are not sure what happened here. We estimate that there was at least one explosion on this cruiser. The biggest thing that happened to him was the extensive damage to the ship, “said the spokesman.

Kirby further added, “We evaluate that the ship is capable of making its own way, and it is doing that; It is moving further, now, we think eastward. We think it will probably be placed in Sevastopol for repairs.

Moscow is a famous Russian warship, launched in 1983 and carrying 16 anti-ship Vulcan cruise missiles. According to Forbes, it also carries vertical tubes for rail launchers for 64 S-300 air defense missiles and 40 Osa missiles. Report. It is one of Russia’s 3 Slava class cruisers and is equipped with heavy weapons, so an ‘ammunition explosion’ could cause severe damage to the ship, according to Russia. According to previous reports, the ship was hit so hard that it was considered unresponsive. But now Russian officials have come up with a resolution to pull the Black Sea flagship Moscow back to port.

Earlier on March 24, the Russian landing ship Saratov was flown over the Russian-occupied port of Burdyansk, possibly hit by a Ukrainian missile.