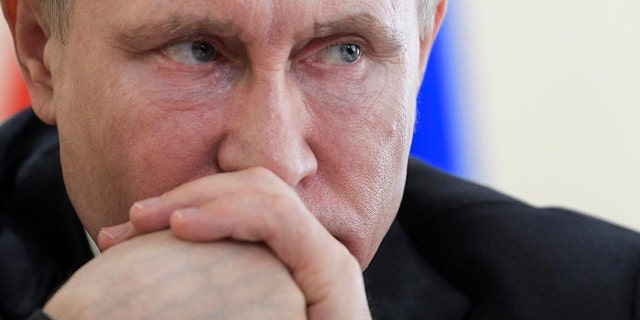 Russia rejected a temporary cease-fire in Ukraine that the United Nations secretary general requested for the purpose of civilian evacuation during the Eastern Orthodox Holy Week leading up to Easter. Russia’s deputy UN ambassador said the cease-fire request was not sincere and would only provide time to arm Ukrainian soldiers.

UN Secretary General Antonio Guterres called for a 4-day ceasefire to allow for evacuations in battle zones and for safe corridors to bring in food and medicine.

Russian President Vladimir Putin is seen above. The country has consistently denied any role in the poisoning of an ex-spy and his daughter on UK soil.
(Alexei Druzhinin, Sputnik, Kremlin Pool Photo via AP)

Civilians, including children, remain trapped in the eastern region of Donbas, where Russian forces began a new fierce offensive, and in the devastated port city of Mariupol. Guterres said earlier Tuesday that more than 12 million people in Ukraine needed humanitarian assistance. He predicted that number would rise to 15.7 million, about 40% of all Ukrainians remaining in the country.

Even China, which has not condemned Russia and abstained from votes on resolutions against the aggressor country, said it supported a humanitarian cease-fire.

Russia, as a permanent member of the Security Council, has twice used its veto power on resolutions focused on Ukraine after the invasion began in February.

Russia’s rejection also comes after the head of the World Council of Churches reached out to Moscow’s Patriarch Kirill, urging him to use his religious authority as the head of Russia’s Orthodox Church to call for a cease-fire as Orthodox Christians celebrate Easter this weekend.

“Our humble request to your Holiness in this particular and impossible situation is to intervene and ask publicly for a ceasefire for at least a few hours during the Resurrection service,” Rev. Ioan Sauca, a Romanian Orthodox priest and acting general secretary of the World Council of Churches, wrote in a letter published Tuesday.

Sauca requested this move in order “to give a chance to the soldiers and to the terrified civilians to embrace and greet one another with the paschal greeting, to silence for a moment the bombs and the missiles and to hear instead the triumphant sound of the church bells and the joyful signing of the faithful people. May such a short ceasefire be a foretaste and a proof that a lasting peace can be achieved. ”

Sauca noted that “the Orthodox and Greek Catholic faithful in Ukraine, in Russia and all over the world are preparing to celebrate at the end of this week the most important feast of the year, the Day of Resurrection.” The priest also noted that the fighting in World War I “stopped for a moment so that the soldiers could share with one another greeting the Resurrection.”