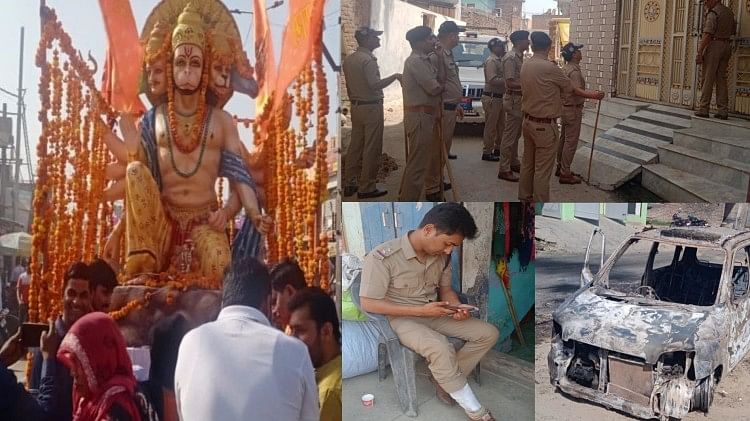 In Dada Jalalpur village of Bhagwanpur area, people of a community pelted stones from the roofs on the procession being taken out on the occasion of Hanuman Janmotsav. This caused a stampede in the procession. More than a dozen people were injured in stone pelting. As soon as the information was received, people from nearby villages also gathered at the spot. This created tension between the people of both the communities.

The police who reached the spot barely handled the situation. Police called for an ambulance and sent the injured to the hospital. People of some organizations also reached the village. The police were trying to control the agitated crowd. In view of the tension, PAC has been deployed with heavy police force.

According to the police, a procession was being taken out to mark the birth anniversary of Hanuman. As soon as the procession reached Dada Jalalpur village from Dada Patti at around eight o’clock, stone pelting started from the roof of a house. After this stone pelting started from the second and third houses as well. This led to screams and stampede on the spot. The people involved in the procession, saving themselves, gathered on one side and informed the police and others.

As soon as the information was received, SP Dehat Pramendra Dobal, CO Mangalore Pankaj Gairola, Inspector Mangalore Amar Chand Sharma, SO Bhagwanpur PD Bhatt, CO Roorkee Vivek Kumar reached the spot along with the police force. Taking the front, the police scattered both the sides. But the commotion increased due to the arrival of a large number of people from nearby villages. Police sent the injured to the hospital by ambulance.

Also read…the guldar ate the innocent by nagging: Eight-year-old Naveen was going to the wedding with grandmother, after seeing the dead body, the heart of the family was torn

A large number of people of Hindu community reached Bhagwanpur police station on Sunday morning and met SP Dehat Pramendra Dobal. It is alleged that some people of the Muslim community had also raised slogans of Pakistan Zindabad in the night. Due to which the matter took a big turn. The villagers demanded strict action in the matter. SP Dehat assured that the police is investigating about the slogan raising. If the matter is found to be true, strict action will be taken.