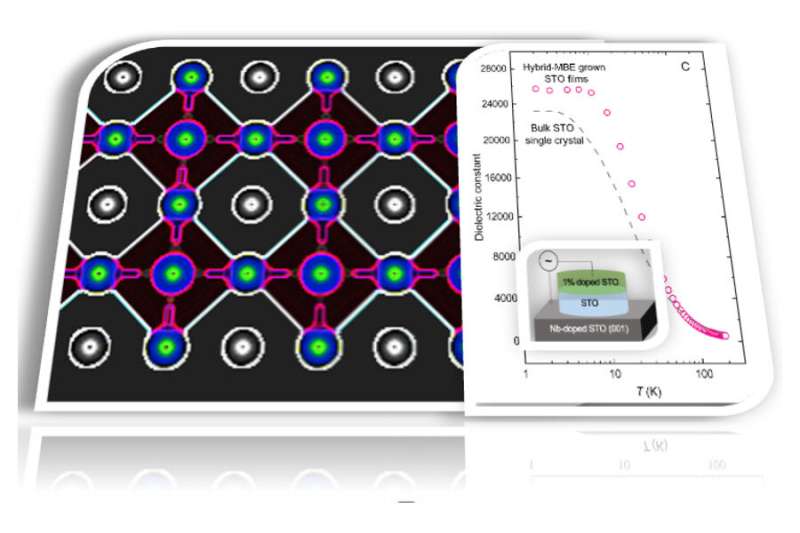 A University of Minnesota Twin Cities-led research team has solved a longstanding mystery surrounding strontium titanate, an unusual metal oxide that can be an insulator, a semiconductor, or a metal. The research provides insight for future applications of this material to electronic devices and data storage.

The paper is published in the Proceedings of the National Academy of Sciences.

When an insulator like strontium titanate is placed between oppositely charged metal plates, the electric field between the plates causes the negatively charged electrons and the positive nuclei to line up in the direction of the field. This orderly lining up of electrons and nuclei is resisted by thermal vibrations, and the degree of order is measured by a fundamental quantity called the dielectric constant. At low temperature, where the thermal vibrations are weak, the dielectric constant is larger.

In semiconductors, the dielectric constant plays an important role by providing effective “screening,” or protection, of the conducting electrons from other charged defects in the material. For applications in electronic devices, it is critical to have a large dielectric constant.

High quality centimeter-size samples of strontium titanate exhibit a measured low-temperature dielectric constant of 22,000, which is quite large, and encouraging for applications. But most applications in computers and other devices would call for thin films. Despite an enormous effort by many researchers using diverse methods to grow thin films, only a modest dielectric constant of 100–1,000 has been achieved in thin films of strontium titanate.

In thin films, which can be just a few atomic layers thick, the interface between the film and substrate, or the film and the next layer up, can play an important role.

Bharat Jalan, senior author on the paper, professor and Shell Chair in the University of Minnesota’s Department of Chemical Engineering and Materials Science, theorized that these “buried” interfaces might be masking the true dielectric constant of strontium titanate. By carefully accounting for this masking effect, Jalan and his students discovered that the true dielectric constant of their strontium titanate films exceeds 25,000 — the highest ever measured for this material.

The findings by Jalan and his students and collaborators provide critical insight into the role of interfaces between an insulator and a metal as found in capacitor structures ubiquitous in modern technology, even when both the metal and the insulator are derived from the same material.

“Semiconductors are among the most important materials used in modern technology,” Jalan said. “While much is known about conventional semiconductors such as silicon and gallium arsenide, there are several unsolved mysteries surrounding oxide semiconductors like strontium titanate.”

Jalan said that with this research they resolved a longstanding issue concerning the low dielectric constants in strontium titanate films through defect and interface control.

“These results build on a remarkable record of success for the method of film growth, known as hybrid Molecular Beam Epitaxy, discovered by Jalan,” said Richard James, a Distinguished McKnight University Professor in the Department of Aerospace Engineering and Mechanics, and a co -author in the study. “The quality of the films from Jalan’s group is truly exceptional.”

The student leading the growth effort was Zhifei Yang, graduate student in the School of Physics and Astronomy at the University of Minnesota supervised by Jalan.

“It was quite rewarding to see that an interface only a few atomic layers thick can have a tremendous impact on the measured value,” Yang said on the discovery of high dielectric constants.