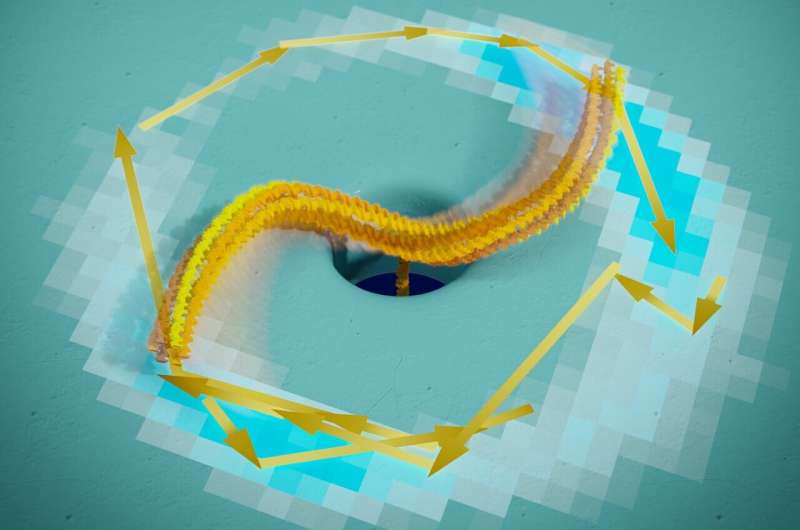 Researchers from TU Delft have constructed the smallest flow-driven motors in the world. Inspired by iconic Dutch windmills and biological motor proteins, they created a self-configuring, flow-driven rotor from DNA that converts energy from an electrical or salt gradient into useful mechanical work. The results open new perspectives for engineering active robotics at the nanoscale. The article is now published in Nature Physics.

Rotary motors have been the powerhouses of human societies for millennia, from the windmills and waterwheels to today’s most advanced offshore wind turbines driving the green-energy future. “These rotary motors, driven by a flow, also feature prominently in biological cells. An example is the FoF1-ATP synthase, which produces the fuel that cells need to operate. But the synthetic construction at the nanoscale has thus far remained elusive,” says Dr. Xin Shi, postdoc in the lab of prof. Cees Dekker in the department of Bionanoscience at TU Delft.

“Our flow-driven motor is made from DNA material. This structure is docked onto a nanopore, a tiny opening, in a thin membrane. The DNA bundle, only 7 nanometers thick, self-organizes under an electric field into a rotor-like configuration, which subsequently is set into a sustained rotary motion of more than 10 revolutions per second,” says Shi, first author of the publication in Nature Physics.

“For seven years, we have been trying to build such rotary nanomotors synthetically from the bottom up. We use a technique called DNA origami, in collaboration with Hendrik Dietz’s lab from the Technical University of Munich,” adds Cees Dekker, who supervised the research. . This technique uses the specific interactions between complementary DNA base pairs to build 2D and 3D nano-objects. The rotors harness energy from a water and ion flow that is established through an applied voltage or even simpler: by having different salt concentrations on the two sides of the membrane. The latter is one of the most abundant energy sources in biology that powers various critical processes, like cellular fuel synthesis and cell propulsion.

This achievement is a milestone, as it is the first-ever experimental realization of flow-driven active rotors at the nanoscale. When the researchers first observed the rotations, however, they were puzzled: how could such simple DNA rods exhibit these nice, sustained rotations? The puzzle was solved in discussions with theorist Ramin Golestanian and his team at the Max Planck Institute for Dynamics and Self-Organization in Göttingen. They modeled the system and revealed the fascinating self-organization process where the bundles spontaneously deform into chiral rotors that then couple to the flow from the nanopores.

From simplicity to rational design

“This self-organization process truly shows the beauty of simplicity,” says Shi. But the importance of this work does not stop at this simple rotor itself. The technique and physical mechanism behind it establish an entirely new direction of building synthetic nanomotors: flow-driven nanoturbines, which is, a surprisingly unexplored field by scientists and engineers. “You would be surprised how little we knew and achieved on building such flow-driven nanoturbines, especially given the millennia-old knowledge we have on building their macroscale counterparts, and the critical roles they fulfill in life itself,” says Shi.

In a further step (which is in preprint) the group has used the knowledge they learned from building this self-organized rotor to make a next important advance: the first rationally designed nanoscale turbine. “Like how science and technologies always work, we started from a simple pinwheel, now are able to recreate the beautiful Dutch windmills, but this time with a size of only 25 nm, the size of one single protein in your body,” says Shi , “and we demonstrated their ability to carry loads.”

Next, to better understanding and mimicking motor proteins such as FoF1-ATP synthase, the results open new perspectives for engineering active robotics at the nanoscale. Shi: “What we have demonstrated here is a nanoscale engine that is truly able to transduce energy and do work. You could draw an analogy with the first invention of the steam engine in the 18th century. Who could have predicted then how it fundamentally changed our societies? We might be in a similar phase now with these molecular nanomotors. The potential is unlimited, but there is still a lot of work to do.”