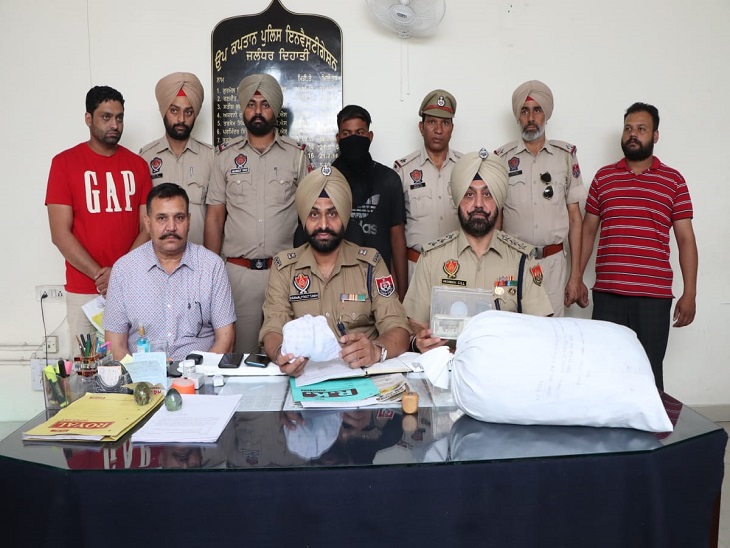 Based on a tip-off, the CIA wing of Jalandhar Police has arrested a person who was going to supply drugs on a motorbike by doing a blockade. 115 grams of heroin, 6 kg of ganja and drug money of Rs 63500 have been recovered from the possession of the arrested person.

The arrested drug smuggler has been identified as Shashikant. He was going on a motorcycle carrying a supply of drugs from Phillaur’s side. Its secret information was received by Pushpa Bali, in-charge of the CIA staff. He immediately informed his superiors about this and formed a team under the leadership of ASI Gurmeet Ram to nab this smuggler. It came to know about this smuggler that it was coming from Via Noormahal, Sugarcane village. The team formed blocked the block. When the motorcycle came at the block, the person driving it was searched. Along with intoxicants, drug money was also recovered in the search. The police suspect that the cash which was recovered with him was the drug which had come after supplying it on the way.

The arrested accused have been identified as Shashikant alias Shashi, son Padan Bahadur, resident of Nahar Kanda, Panj Dora Jagat Pura, Phillaur, PS Phillaur District, Jalandhar. As has happened. Investigation has revealed that the background of the arrested accused is also criminal. In the past, a case of murder, hostage, assault as well as robbery has been registered against him under sections 307, 160, 324, 148, 149, 380, 427, 326 of the Indian Penal Code at Phillaur. The arrested accused was absconding after the registration of the case and was also wanted by the police.

It is a matter of great surprise that the arrested accused used to sell drugs openly. Along with the intoxicants, small digital weighing scales were also carried along with them to weigh them. He used to supply that much goods to the one who had to pay for the goods.