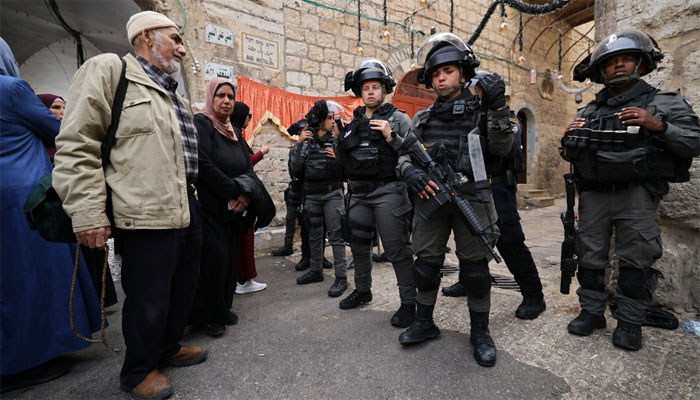 Hundreds of youths piled up rocks with iron bars and erected temporary barricades to prevent non-Muslims from entering the site. Most of them were wearing masks, police said. Reports indicate that some passengers inside the buses were injured as a result of the stone pelting.

Five people were slightly injured after Palestinians pelted stones at a bus near the Old City of Jerusalem, the MDA said. Police say two suspects have been arrested. pic.twitter.com/M7N6EZIGvH

Seven of the injured visitors were taken by the Megan David Edom Ambulance Service to the city’s Shar Zedek Medical Center.

At least 17 Palestinians were also injured in clashes with Israeli police on Sunday morning, according to the Red Crescent. Some of them have been shifted to hospitals. Police arrested about nine Palestinians during the clashes.

In a statement, police said its officers were pushing Palestinians away from the site to allow visitors. Freedom of worship will be fully maintained for worshipers at Temple Mount, along with visits. Israeli police will continue to crack down on lawbreakers and rioters. ” Later, in the visual, Jewish visitors were shown visiting the site.

During the week-long Passover holiday, many Jews make the traditional pilgrimage to Jerusalem. Notably, non-Muslims are only allowed to visit the Temple Mount during certain hours. They are not allowed to pray on the spot. For the Jews, it is the holiest place in Judaism. While for Muslims, it is the third-holiest place in Islam.

This year, there was a passover in the month of Ramadan. During the holy month for Muslims, the Old City sees a greater number of clashes between Muslims and non-Muslims. Also, the city is sacred to Christians who make pilgrimages during Easter. Authorities observed three different religious holidays during the same week Possibility Of violence.

A group of Palestinians also hung a banner of the terrorist group Hamas on the Temple Mount. The banner read, “Hamas calls for general mobilization and expulsion of mobs threatening to attack al-Aqsa.”

A sign was hung in the compound of the Al-Aqsa Mosque on the Temple Mount that evening: “Hamas calls on you to gather in general and repel the mob of refugees who threaten to attack Al-Aqsa.”Solomon 1 pic.twitter.com/TTbHWwSyQZ

Earlier in the day, violent clashes broke out between Israeli police and Palestinians at the Al-Aqsa Mosque. About 158 ​​Palestinians were reported injured, mostly due to inhalation of tear gas. Palestinians hurled stones and firecrackers at armed police, and in response, police used force and tear gas shells.

Police raided the mosque to clear the stored stones. Dozens were arrested during the raid. It took six hours to evacuate the premises and the afternoon prayers were peaceful, with about 50,000 Muslims attending the prayers. In May last year, an 11-day war in Gaza began with a similar police crackdown on a mosque.