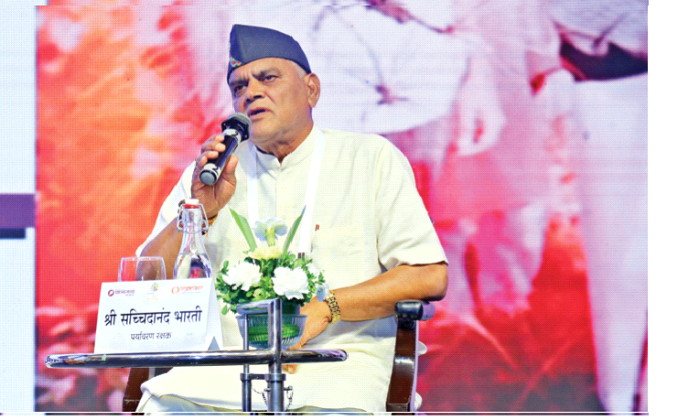 Sachchidananda Bharti greened the deserted hills in the area of ​​800 hectares around the upper reaches of Pauri Garhwal by planting trees with public participation. To solve the water problem, make small water ponds from which Gadganga came down on the deserted hill. That is why he is called ‘Bhagirath’ in the locality. Sachchidanand ji got funding from the World Bank but he refused. They say environmental protection is worship, not projects that run on funding.

Sudarshan G stayed upstairs for three days. Wandering in about 8 hectares of forest out of 800 square hectares. We have named that forest Sudarshan Forest after him. It also has 2000 cedar trees. This work was discussed all over the country when Sir Sanghchalak ji came to the fore. When Sudarshan ji stayed for three days, people felt that something big had happened here. Then people from many countries of the world started coming.

In the sixth session of Panchjanya’s environmental dialogue program, Bhagirath Sachchidananda Bharti of Pauri Garhwal, Uttarakhand gave a message with his simplicity, clarity and simplicity. When asked about the first step by Richa Aniruddha, who is conducting the session, Mr. Bharti said that the work we have done for the last four decades to save water and forest by working with the people in a small place called Uprekhal, today by the Panchajanya family With the love and respect given to that work, this work has spread many times.

Mr. Bharti said that this session is an opportunity to tell the story of people associated with four decades. In the area of ​​Uttarakhand where this work took place, there was first forest around and there was life connected with forest. Small children, mothers used to bring wood for food. For the animals, the materials to build the house came from the forest. A village which did not have its own forest had to depend on the forest of another village. We thought that if every village has its own forest then every village will have self-esteem. For this, the woman spoke to the Mars team because most of the work related to the forest was done by women. They started making forest in small pieces. Trees were planted which were of use to the women. This is how the series went. After a few years of drought, our trees also dried up. To make them live, we made small pits around the trees.

This was followed by an opportunity to understand water traditions across the country. The country has a grand tradition of saving water, managing water. Then the idea came that there would be such a tradition in Uttarakhand too. It was found out that two-and-a-half hundred years ago in Uttarakhand, there was a tradition of chal khal to save water. Pits of 32 steps by 32 steps by 3 steps were made to hold water in it. We made pits of one or two square meters by modifying the pattern of the same trick skins. We named it Jal Talaya.

Meanwhile, an amazing thing happened. In 1999, there was always water in a dry rauna. When the news was published in the newspapers, the funding team of the World Bank came. He proposed funding of Rs 1000 crore. We refused. This news also appeared. Indigenous movement was going on in those days. Those people reported this news to the head of Rashtriya Swayamsevak Sangh, Reverend Kuppa. C. Taught Sudarshan ji. After this, a program was made for Sudarshan ji to come to the fore.

The people of the government came and asked us to tell them something worthwhile. Uparkhal road work was stalled for 27 years. This road became in the first 14 days of Sudarshan ji’s arrival. Sudarshan G arrived on the night of April 6. Two-and-a-half thousand locals arrived just before where they were supposed to land, and unloaded them and brought them to the village on their shoulders.

Sudarshan ji stayed among the people till 11 o’clock at night. This is an event of seven thousand feet altitude. Sudarshan ji visited more than 40 nearby villages. Wandering in about 8 hectares of forest out of 800 square hectares. We have named that forest Sudarshan Forest after him. It also has 2000 cedar trees. This work was discussed all over the country when Sir Sanghchalak ji came to the fore. When Sudarshan ji stayed for three days, people felt that something big had happened here. Then people from many countries of the world started coming. In the last few days, Prime Minister Narendra Modi ji mentioned the above for two and a half minutes. Then Panchajanya published this work in detail. I thank all of them.

Richa Aniruddha asked if you refused World Bank funding. Sachchidananda ji said that we have taken this work as a service. We worship the Himalayan deity. This work is worship for us. We have no project. It is our lifelong, generational work. The fund will have a limit. If people join together like a project, then when the project is over, people will separate. Mr. Bharti said that every person should start from his home to protect the environment.