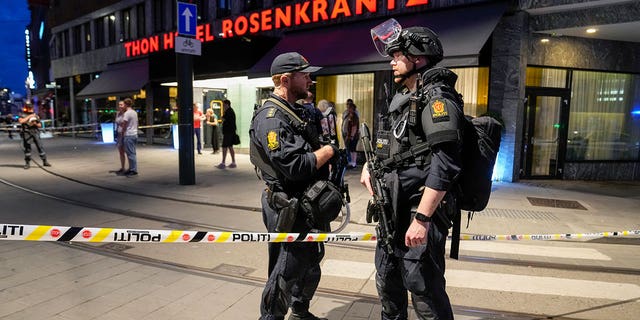 A shooting at a Norway nightclub and in nearby streets that left two dead and 10 wounded Saturday night is being investigated as a possible terrorist attack, Norwegian police said.

A Norwegian citizen opened fire at the London Pub, a local LQBTQ + bar in Oslo, just a few hours before the Oslo Pride Parade was set to take place. Police said the suspected gunman, a 42-year-old originally from Iran, was arrested after opening fire at three locations.

Police stand guard outside a bar in central Oslo, early Saturday, June 25, 2022. Norwegian police say a couple of people were killed and at least 10 were injured.
(Javad Parsa / NTB via AP)

Barstad said the motive of the shooting was not immediately evident and it was unclear whether the shooting had any connection to the Pride Parade, according to The Guardian.

“Police are in contact with the organizers of the Pride event this Saturday,” Barstad said, according to The Guardian. “There will be a continuous assessment of what measures police should take to protect that event and whether this incident has a connection to Pride at all.”

The suspect was believed to be the sole perpetrator of the crime. Two firearms were seized, including a handgun and an automatic weapon.

Norwegian journalist Olav Roenneberg recalled witnessing the shooting, saying he saw a man arrive with a bag who then began shooting.

“First I thought it was an air gun. Then the glass of the bar next door was shattered and I understood I had to run for cover,” he told Norwegian public broadcaster NRK.

Christian Bredeli was also at the bar when the shooting took place, telling Norwegian newspaper VG he was stuck on the fourth floor with a group of approximately 10 people until they were given the all-clear to leave.

“On our way out we saw several injured people, so we understood that something serious had happened,” Bredeli said.

All Pride events for the remainder of the day were canceled per police orders.

“Oslo Pride therefore urges everyone who planned to participate or watch the parade not to show up. All events in connection with Oslo Prides are canceled,” the organizers wrote on the official event Facebook page.

Norway previously experienced a deadly mass killing in 2011, where a gunman left 69 people dead on the island of Utoya after setting off a bomb in Oslo, killing an additional 8 people as a result.

Haley Chi-Sing is a TOU Digital production assistant. You can reach her at leyhaleychising on Twitter.