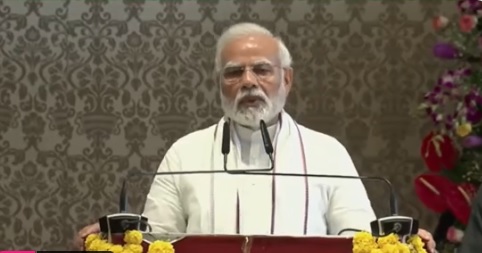 Many cities of Maharashtra will become growth centers of the country in the 21st century: PM

Prime Minister Shri Narendra Modi said on Tuesday that Mumbai is not just a city of dreams, there are many such cities in Maharashtra which are going to be the development hubs of the country in the 21st century. With this thinking, on the one hand, the infrastructure of Mumbai is being modernized and on the other hand, modern facilities are being enhanced in other cities as well. He said that a new aspiration of development has been awakened even in the tribal districts which have lagged behind in the journey of development.

The Prime Minister was addressing the function after inaugurating Jal Bhushan Bhawan and Gallery of Revolutionaries at Mumbai Raj Bhavan today. He said that this Raj Bhavan of Maharashtra has witnessed many democratic events in the past decades. It has witnessed the resolutions taken here as an oath in the interest of the Constitution and the nation.

Without naming anyone, the Prime Minister, while targeting the previous governments regarding the country’s heritage, said that maybe the people of the world would make fun of us that Raj Bhavan has been functional here for 75 years but the bunker below it was not known to anyone for seven decades. “It simply came to our notice then. How indifferent we are to our own heritage. He called upon the countrymen to find such places during the Amrit Mahotsav of Independence and said that the pages of our history of exploration must be understood. He said that the bunker which was not known to anyone, in which the goods which were going to be used to kill the revolutionaries of India were kept, in the same bunker the name of the revolutionaries is today. He said that the countrymen should have such passion only then the countrymen get inspiration.

The Prime Minister said that Maharashtra has inspired the country in many areas. If we talk about social revolutions, there is a very rich legacy of social reformers from Jagatguru Shri Sant Tukaram Maharaj to Baba Saheb Ambedkar. In Maharashtra, saints like Sant Gyaneshwar, Sant Namdev, Samarth Ramdas, Sant Chokhamela have given energy to the country. If we talk about Swarajya, then the life of Chhatrapati Shivaji Maharaj and Chhatrapati Sambhaji Maharaj strengthens the spirit of patriotism in every Indian even today. He recalled Vinayak Damodar Savarkar saying that he turned every torture into a consciousness of freedom which is inspiring.

He said that when we talk about India’s independence, we inadvertently limit it to certain events. While the independence of India has involved the penance of countless people and their penance. The collective impact of many of the events that took place at the local level was national. The means were different but the resolution was the same. He said that whatever the social, familial, ideological roles, whatever the place of the movement in the country or abroad, its goal was complete independence of India.

He said that the nature of our movement for independence was both local and global. Like the Gadar party was national from the heart, but global in scale. Shyamji Krishna Verma’s India House was a gathering of Indians in London, but the mission was for India’s independence. The Azad Hind government under Netaji was dedicated to Indian interests, but its scope was global. That is why the independence movement of India inspired the independence movement of many countries of the world. This spirit of local to global is also the strength of our self-reliant India campaign.