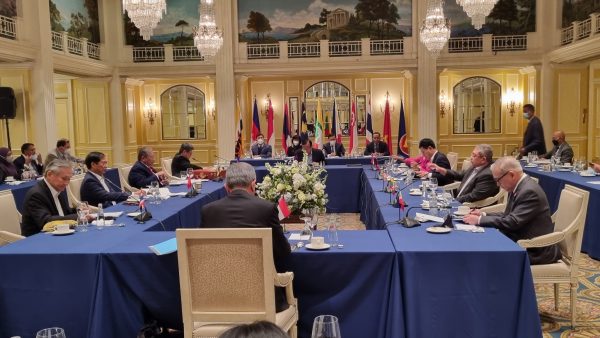 Saifuddin did an Interview with BenarNews in Washington, DC following an informal meeting of ASEAN foreign ministers, at which he said that ASEAN’s special envoy should engage all stakeholdersincluding the National Unity Government (NUG) and its National Unity Consultative Council (NUCC), which includes representatives from a broad array of resistance groups.

The Malaysian envoy told BenarNews that in his remarks to the informal meeting, Prak Sokhonn, who is also Cambodia’s foreign minister, “in some ways welcomed the idea of ​​engaging the NUG and the NUCC and the other stakeholders.” He added, “Two other ministers spoke along the same lines, but not necessarily mentioning the NUG and the NUCC.” Saifuddin said he was planning to have his first in-person meeting with the NUG’s Foreign Minister Zin Mar Aung in Washington on Saturday. (Sokhonn has not yet confirmed his comments to the meeting.)

Over the past month, Saifuddin has been particularly vocal on the necessity of including the NUG in ASEAN’s efforts to end Myanmar’s conflicts. At the start of May, he suggested that the bloc should open informal engagements with the NUG, after hinting at it in comments to the Malaysian parliament in October. The suggestions were accompanied by expressions of frustration over the military junta’s stonewalling on the implementation of ASEAN’s Five-Point Consensus peace plan, which calls for an immediate cessation of violence, inclusive dialogue involving “all parties,” and the delivery of humanitarian aid.

Saifuddin’s frustration is soundly justified. In the year since, the junta has done virtually nothing to implement the Five-Point Consensus, aside from hosting the ASEAN special envoy in Naypyidaw. It has increased its attacks on the anti-junta resistance and refused to grant the envoy to any senior members of the NUG, as the Five-Point Consensus would seem to require, describing it as a “terrorist” organization.

It has also rejected Saifuddin’s calls for the bloc to open contacts with the NUG. In a statement on May 3, its Foreign Ministry described the suggestion as “irresponsible and reckless” and said it could “abet terrorism and violence in the country.”

According to his interview with BenarNews, Saifuddin told his ASEAN colleagues that conversations with opposition figures could be held via video conference calls and other means if the military junta prohibits such meetings from happening in-person during the envoy’s official missions to Myanmar.

According to comments posted on Twitter, he also lambasted the junta’s exclusion of Noeleen Heyzer, the United Nations Secretary-General’s Special Envoy on Myanmar, from involvement in a recent high-level meeting discussing ASEAN’s provision of humanitarian assistance to Myanmar. “We should not allow SAC in dictating who to be invited for related meetings,” he said.

The apparent receptiveness of Prak Sokhonn and at least some ASEAN governments to the idea of ​​engaging the NUG reflects the bloc’s growing disillusionment with the Five-Point Consensus. The main problem with the consensus is that it assumes the good faith of the various sides to Myanmar’s conflict, including the junta, and their will to at least participate in a process of dialogue. It has also been plagued by divisions between ASEAN member states, some of whom have expressed strong opposition to any approach that could be seen as “interference” in Myanmar’s internal affairs.

The outcome has been a situation in which ASEAN has dealt primarily with the party in nominal control of Myanmar’s territory and institutions of government – the military – and allowed it to effectively set the terms of how the consensus will be implemented. As I argued in these pages earlier this month, this is largely how ASEAN has approached the issue of humanitarian aid: by directing its efforts purely through the military administration that is the primary cause of the country’s humanitarian emergency.

Malaysia’s government has made a number of suggestions for how the bloc’s approach could change. In addition to engaging one of the main parties to the country’s conflict, it has also called for the doubling of humanitarian assistance to Myanmar through more transparent mechanisms, and to strengthen the power of ASEAN’s special envoys to deal with the crisis.

As Bridget Welsh noted in a recent article For 9DASHLINE.com, the Malaysian government’s new approach is an effective admission “that ASEAN’s five-point consensus is not working, and has not been working for some time.”

“Stopping short of officially recognizing the NUG, Malaysia’s proposals acknowledge the multiple power centers inside a country at war with itself,” she wrote.

Such an approach would no doubt enjoy the support of the US government. Kurt Campbell, the Biden administration’s Indo-Pacific coordinator, said yesterday that the administration wants Southeast Asian leaders to play a “more deeply engaged role” in resolving the Myanmar crisis. “We hope and expect ASEAN to take real initiatives in terms of how to engage both the current government and the opposition about the way forward,” he said during an event at the US Institute of Peace.

Whether Myanmar’s interlocking conflicts are susceptible to a negotiated settlement at this stage remains unclear. And while engaging with the military junta will probably be inevitable if there is to be a negotiated end to the crisis, ASEAN’s refusal or inability to engage with any of the entities opposing will continue to be a fast-track to failure.

“By working only with one side in an ongoing conflict,” Welsh wrote, “ASEAN risks becoming more complicated in the deadly tactics adopted by the military, and the bloc will lose further credibility.”