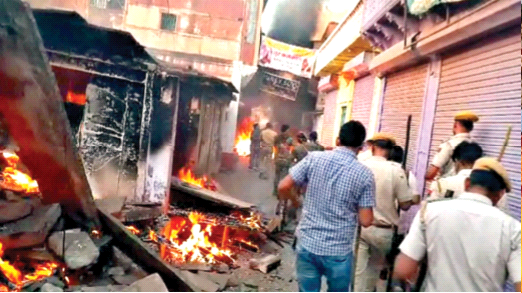 Ramadan Ka and Ram are the ninth month together. And with it came the news of the riots. In this country, non-sectarian / Muslim quarters do not talk about Ganga-Jamuni culture. In such a situation, if Ram Navami and Ramzan came together, the atmosphere should have been good, Ganga-Jamuni reunion, courtesy, kheechadi-chis, enthusiasm and laughter, but instead of enthusiasm, instead of laughter, why did explosions start echoing? ? Why did the atmosphere produce screams, blood spots and blood?

The meaning of attack in Ramadan
The question is whether this is the first time this has happened and why we should not worry about these stonings, attacks, arsonists as exceptions? But that is not the case. You can see and measure the spread of this phenomenon in two ways.

‘First – If the stoning of a Hindu procession was confined to one place, you would consider it an accident but it is not found in one place but in more than a dozen places. This means that these attacks have some obvious effects.

‘ Second The test is whether there are examples of violent calls from outside the Islamic world outside India during Ramadan. And what are the first examples of this? Yes! You will see not one but many examples of this.

In June 2018, the Lashkar-e-Taiba front Jamaat-ud-Dawa appealed to Muslims to wage jihad during the month of Ramadan. Maulana Bashir, the top commander of the claims and calling himself the messenger of terrorist Hafiz Saeed, also said that one day the flag of Islam would be flown in India and America and PM Modi would be killed.

If you look at it, you will see that the Muslim community is also divided into many radical / terrorist organizations and during Ramadan, except for infidels, Muslims do not fail to target each other. See the example of Afghanistan. A Muslim country, but during Ramadan, on May 12, 2020, a maternity hospital in Kabul was attacked by jihadists for establishing religion. It killed 24 people. Eight of them were children who had just entered the world. There were some mothers who had just given birth or were about to give birth. There were some nurses who were helping these mothers to have children.

Analysis of the history and current scenario of violent incidents during Ramadan shows that attacks during Ramadan are not a separate exception and are not local in nature. That is, these episodes of riots are related to Ramadan, they are related to Islam. This is not a region specific problem, nor is there anything in this period that Muslims are facing more problems. This is happening in other places besides India and has been happening in every period.

‘Religious affiliation’ of terrorism
Now just remember May 2018. Kashmir Chief Minister Mehbooba Mufti has appealed to the Center to suspend security forces’ operation against militants in the valley and declare a ceasefire in view of the holy month of Ramadan. How should this appeal be viewed?

Terrorism has no religion. If terrorism and religion are two different things, then what is the point of appealing to stop the operation against terrorists during the month of Ramadan? Don’t terrorists use violence during Ramadan? Terrorists have no religion, so what is the point of stopping the campaign against them in Ramadan? Jihad is declared in this religious month and attacks are taking place in other places during this religious month. May, 2021, the month of Ramadan once again. There were fierce attacks on Israel from Palestine. Hamas’s popularity has been declining since 2014 without a major conflict with Israel. Hamas chose the month of Ramadan to spread unrest. The number of such attacks in Kashmir has been steadily increasing during Ramadan every year.

Peace away from Ramadan
What does Ramadan have to do with peace? In fact, it is during this time that difficult times for non-Muslims begin.

The Battle of Badr also took place in the month of Ramadan after the establishment of Islam.
There was also a battle of conquest over Mecca this month.

In recent years, the Nusra Front, al-Qaeda’s official organization in Syria, has called Ramadan a month of victory, and as Ramadan approaches, IS spokesman Abu Mohammed al-Adnani told his supporters around the world to “be prepared.” Get ready to make this month a month of calamity for the infidels.

So have Islam and Ramadan become a problem for civil society? When it comes to group prayers, azan, challenging others with loudspeakers, what is this? Calling for prayers is called azan, but the literal meaning of this call is full of insistence on Muslims, their God and their Prophet, to be the best and last righteous and to completely reject the faith of all others. This cry of ‘No one but us ..’ goes as far as insisting on mass prayers on the road to disrupt traffic and public facilities and break the civil system in the name of burqa. The question is whether this is acceptable in a cultured society.

In Karauli, Rajasthan, on the evening of April 2, a New Year’s procession passed in front of a mosque, throwing stones from the roof. After this the storms broke out. The fire destroyed property worth millions and injured 20 people in the stoning. More than 46 people were detained and many more were arrested.

Kanhaiyalal Rana, 65, died after being stoned by the Muslim community on Ram Navami in Gujarat’s Khambhat and Anand districts. Another person was injured and several shops were set on fire. Police took control of the situation by leaving Teargase. A similar clash took place in Himmatnagar in Sabarkantha district.

More than 16 people have been injured in a clash on Ram Navami in Hirahi village in Jharkhand’s Lohardagga district. The condition of the four is serious. During the violence, 10 motorcycles and a pickup van were set on fire. Three days later, in Aru village in the Sinha police station area of ​​Lohardagga, some Muslim youths broke into the Shiva temple and forcibly turned off the loudspeakers.

The stone was pelted during the Ram Navami Shobha Yatra in Mulbagal town in Kolar district of Karnataka. The two-wheeler and four-wheeler involved in the voyage along with the statue were also attacked and set on fire.

Violence erupted after stones were hurled at a Ram Navami procession in the Talab Chowk area of ​​Khargone district in Madhya Pradesh. Clashes also broke out in four other areas of the city. At least 10 houses were set on fire. Bullets were also fired during this. Twenty-four people, including SP Siddharth Chaudhary, were injured in the violence. Seven people, including two policemen, were injured in clashes at several places after the attack on the Ram Navami procession in Sendhwa town of Barwani district.

As the procession of Ram Navami passed in front of the mosque in Malad area of ​​Mumbai, the capital of Maharashtra, the Muslim community chanted slogans of ‘Allah Ho Akbar’. Clashes broke out in the Mankhurd area after Muslims forcibly stopped Hindus. The Muslim community waved the green flag during the Ram Navami procession at Nevasa in Ahmednagar district. Police were attacked when they tried to stop. Violence erupted in Jalna district after Muslim youths pelted stones at the Hanuman temple.

The Ram Navami procession was attacked with bricks in Manchantala area of ​​Bankura district in West Bengal. The procession was pelted with stones and set on fire in Shibpur area of ​​Howrah district.

Do not accept the world
The world does not accept this bigotry, insanity and bigotry. France imposed special restrictions on Muslims in the month of Ramadan in 2021. The French Senate has passed a bill aimed at curbing radical Islam. The bill has been introduced in the Senate after a lengthy debate on all the provisions. It includes provisions prohibiting the wearing of religious attire by parents of children during school trips, the wearing of facial expressions by minor girls or the wearing of ‘religious symbols in public places’. There is also a ban on flying foreign flags at educational ceremonies, at weddings and in public swimming pools. Right now there is a presidential election in which the immigration problem and Islamic bigotry are big issues.

The dilemma in India
The world is thinking like this but what is going on in India? There are two types of politics in India – one, promoting one-sided violence. The example of Rajasthan is against. After the attacks and violence on the nine-year-old procession in Karauli, the Congress government took a different stance instead of giving justice to the victims. Currently, on the occasion of Mahavir Jayanti procession, the Rajasthan government has issued a decree forbidding people from hoisting religious flags on their houses, keeping in view the sentiments of Jain minorities against Muslim fundamentalists. There was a ban on marching on the roads, watching the procession from the roof. The other thing is that the government is considering only one class as a minority, the other is a majority or any other minority, the government is not worried about it.

An example of this was also seen in Delhi. The Delhi government has ordered a two-hour holiday for Muslims during Ramadan. The order was returned when the uproar broke out. This sudden appeasement is the root of the growing disease of superstition and dementia.

Apart from these examples, a good job is appearing now. The administration is taking a hard line on rioters who damage public property and target their property / encroachment. Bulldozers are running. But for the sake of appeasement, some people are protesting and posting crying photos of the families of the rioting Muslims. Events testify against it. They don’t have statistics, they don’t have facts. They just play a game of emotions. The victims of the riots are in the hospital, their homes destroyed. But appeasement players are playing emotional cards instead of paying attention to them.

What will happen if the game of appeasement continues? We have faced division. They are also looking at the plight of minorities in Pakistan. We are also seeing the result of Afghanistan.

It is important that governments take strict action against this scourge in a timely manner in the wake of religion and crop months. Because government is meant to spread fear among the gentlemen, in the civil society, among the wicked. If the government and the administration do not guarantee peace and security for the rest of the people, then who will? If the government does not guarantee peace then often the aggrieved society is filled with resentment and is forced to take the law into its own hands. This should never happen in India because if it did, this Ramadan would be more unfortunate than the riots.