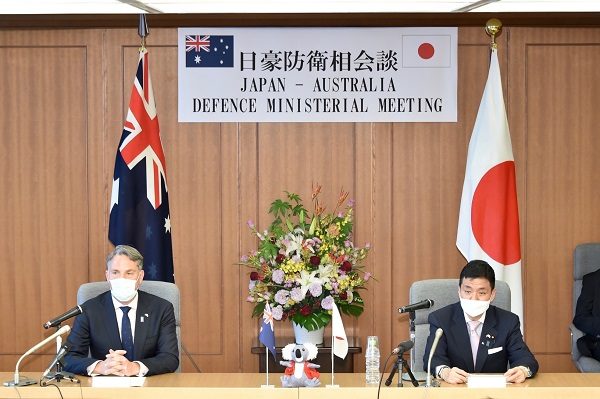 The two countries’ defense ministers pledged to boost ties, including working more closely in Southeast Asia and the Pacific Islands.

Japan and Australia’s defense ministers on Wednesday vowed to step up their ties to support democratic values ​​in the Indo-Pacific region and agreed to work more closely with Southeast Asia and the Pacific Island nations where China is seeking to expand its influence.

Australian Defense Minister Richard Marles and his Japanese counterpart, Kishi Nobuo, have said that region-wide cooperation is necessary to maintain and strengthen the rules-based order in the Indo-Pacific, where there is growing fear that Russia’s invasion of Ukraine may embolden China. increase its assertiveness.

The ministers’ talks in Tokyo came just three days after they met in Singapore on the sidelines of the Shangri-La Dialogue security forum.

“It is clear that our region faces the most complex set of strategic circumstances we have had since the end of World War II and what the region does matters,” Marles told a joint news conference in Tokyo after holding talks with Kishi.

“Only by working together can we uphold the rules-based international order, contribute to an effective balance of military power, and ensure our region remains stable, peaceful and prosperous,” Marles added.

Kishi said the two ministers shared their concerns about the impact of Russia’s invasion of Ukraine. He said they remain strongly opposed to any unilateral change of status quo in the East and South China seas and reaffirmed their commitment to a mutual vision of “a free and open” international order of the seas.

“It is important to strengthen our cooperation with our regional partners, especially with ASEAN and the Pacific Islands, to maintain and reinforce the free and open Indo-Pacific,” he said, referring to the Association of Southeast Asian Nations.

Japanese Prime Minister Kishida Fumio, in a keynote speech at the Shangri-La Dialogue on Friday, promised to provide about $ 2 billion in development aid, patrol boats, maritime law enforcement capabilities, and other assistance to at least 20 Southeast Asian and Pacific Island nations. – where China is attempting to increase its influence – to help them better guard themselves.

Kishida has pledged to bolster Japan’s military capabilities and spending. However, Japan’s attempt to expand its security role in Asia, where many countries suffered from its aggression during World War II, is a sensitive issue.

Japan and Australia in January signed a reciprocal access agreement to allow their troops to enter each other’s country for training and other military purposes and work more closely together.

Japan sees China’s increasingly assertive military activity in the East and South China seas as a threat in some of the world’s busiest sea lanes.

Japan is particularly concerned about Chinese military and coast guard activity in the East China Sea near the Japanese-controlled Senkaku islands, which China also claims and calls the Diaoyu Islands.