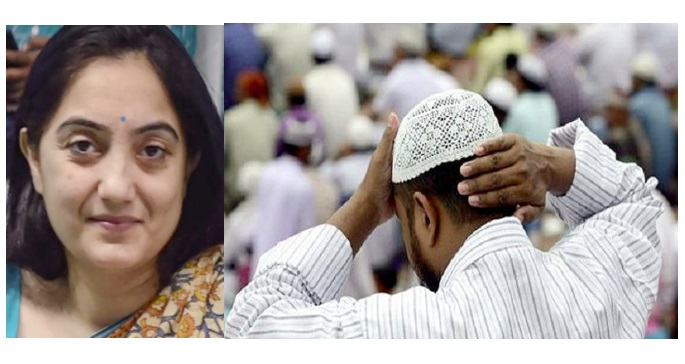 Islam must create scope for discussion

BJP did not fix the suspension of Nupur Sharma and expulsion of Naveen Jindal. On the other hand, there were extremist remarks from the Muslim community. It should not be believed that this case came to a head after the action was taken by the BJP. Here we should see that politics works in its own way but social discussions sometimes take a new direction with a small incident.

Recently The quarrel erupted after BJP spokesperson Nupur Sharma’s remarks on the prophet of Muslims. We need to look at this controversy from many angles. Broadly speaking on social media you will find people cursing the BJP who think that after this controversy the BJP did not fix Nupur Sharma by suspending her and expelling Naveen Jindal. On the other hand, there were extremist remarks from the Muslim community. It should not be believed that this case came to a head after the action was taken by the BJP. Here we should see that politics works in its own way but social discussions sometimes take a new direction with a small incident.

Whom do Muslims trust?
It remains to be seen whether Muslims are really too sensitive about their prophet or whether the leaders of Islam use this issue for their mobilization and demonstration of power. This question arises a lot because it does not seem logical to be hurt emotionally based on what the BJP spokesperson said in the sense that you will find all such information about the Prophet, about the Quran, about the Hadiths on this internet and People from the Muslim community will also find him sharing, which they explode when quoted by someone else.

One side is that what Nupur Sharma was saying, the Muslim society can definitely object to her words, accent etc. But this is the age of technology and in such a case, as soon as you beat the rhythm in the field of TV channels for comparisons, a thousand hidden things will come to the fore which you have been hesitating to talk about for centuries. This is not the time to bully people. Technology has the power to uncover every fact. This is true today and applies equally to all.

The third thing is that it is wrong to talk obscenely about any faith, religion, creed, religion, but if you look at the Nupur-Naveen case, those who heated up the matter to the international level, they directly crossed the line. They have gone to the extent that is not acceptable in any civilized society. If you compare the words of Nupur and his words, then it will be clear. Seeing the level of intelligence of Maulana Nadeem Mufti, Saba Naqvi and others, a third question came up which points to a different danger.

Leading the hands of mania?
The question is whether the contract of the Muslim Jamaat has gone into the hands of lunatics. Is there a thing like civil society left in Islam where there is scope for debate?

This question becomes necessary because when there is a debate on TV, then the Muslims get ready and go there. Every party involved in the debate should know that arguments are also kept in the debate, facts are also kept, layers are also exposed. Technology has advanced. Muslim society also has to keep pace with the changing times. But has Islam matured enough to make its place in social discourse?

Right now we are seeing in social media discussions that when questions are asked about Islam, people put the facts in front of them only from Quran and Hadith. At the moment a huge Quit Islam movement or ‘X Muslim Movement’ is going on. This is also the reason for the frustration of the insane group which wants to become the flag bearer of Islam and keep all things in their hands even in this age. After this debate, the issue will also arise whether Islam will be able to travel further through social discussions or will create more bitterness and difficulties for itself in its attempt to twist the arms of the society and countries at the insistence of the Ummah.

This question is also necessary because if there is a demonstration of power then the work of ousting the sovereignty of a country through the ummah, through the organizations of Islamic countries cannot work and in the case of India it will not work at all. If anyone thinks that these pressures will be created through foreign countries, then they are in a misunderstanding. India has reported not once but 36 times. He who bows down neither to Russia nor to America can bow down to any Islamic country, even those who have such an idea in their mind, they have to stumble further.

The question is also for the Islamic countries because the strength of the ummah is a hoax in which they want to keep the world mubtila and they themselves are heedless. Just look, Turkey and Saudi Arabia, Iran and Iraq, Shia and Sunni, Ahmadiyya in Pakistan, Hajra in Iran – these are so many leaking wounds that Islam itself is bleeding. If this is the ummah, then why are the so-called ‘brothers’ sharpening their knives for each other?

BJP’s far-sighted decision
Then comes the question whether BJP was under pressure? You can see this in many ways. You will feel at first sight that the party has done its loss under pressure. But when you make a political assessment of it and get to the bottom of it, it seems that it is not so. This was the opportunity on which the BJP has introduced the test of opportunity with tremendous speed and calmness. Nupur and Naveen are the leaders of the same party with whom the society seems to be standing. The party leaders are growing so the party is not hurt and especially then, when those leaders are fully with the party, they are not scattered, they are not disillusioned. Experts believe that in this development, the leaders who talk about facts and comparisons have crossed many stages of popularity which it would have taken them decades to cross. The thing to see is who has got the sympathy of the people on which issue?

Secondly, there is anger among the people, but if you look at the engagement of the people towards the BJP, then this party has always understood the indignation of the people, understood them and nurtured their wishes. This is not the first time that people have questioned the party’s decision. Remember, when the BJP had formed an alliance with the PDP in Kashmir, how did the people taunt and criticize? People asked if this is Shyama Prasad Mukherjee’s party? Is this Balraj Madhok’s party? Is this the same party that carried out a ‘mission’ on Kashmir? The bitterness that was in these taunts, the party also drank that bitterness, learned lessons and also fulfilled the decades old expectations of the people by removing the thorn of Article 370.

So it is not that the party with everyone in the society, talking about development of all and having a solid ideological base, would have been distracted on this issue. His goals are long-term and of course he has the will to defeat the divisive agenda. But the way of the party is ‘do more and play less drums’.

Lessons for the Muslim community
What is there to learn from this episode for Indian Muslims? Indian Muslims need to understand that everyone’s beliefs are important. But if you do not keep the scope for others, then the scope for you will also decrease. In fact, the latest rise of bitterness in Indian society begins with Zakir Naik’s lectures. Zakir Naik started lecturing 20 years ago. At first, people like Zakir Naik were comparing the two sects in public programs and secondly, stigmatizing the Hindus, so that the society started boiling slowly. Zakir Naik is the inspiration of terrorists in Bangladesh. The two terrorists involved in the terrorist attack on the Holy Artisan Bakery Cafe in Dhaka in July 2016 were inspired by him. That is, Zakir was stigmatizing Hindus on one side,

Were provoking the society, on the other hand were working to poison the minds of the lunatics and remained the inspiration of the terrorists. Insane people like Zakir and his followers have occupied the pulpits of mosques as much as they want, but what an image of Islam has been created in the society! Muslims have to wonder if these elements have done justice to the whole community, to its image? Because today fugitives like Zakir Naik have become explosive social conditions for Islam.

Note that before trying to drill the Shivling in Gyanvapi Mosque, Ram Navami processions were attacked in many states of the country. Incidents of attacks on temples were frequent. The ISKCON temple in Dhaka, Bangladesh was attacked during Durga Puja last year and this March. In the past, Gorakhnath Peeth was attacked in Gorakhpur. Lakshmi Narayan Temple, Nag Vasuki Temple was attacked in Jammu and Kashmir. There have been frequent reports of attacks on Hindu temples in Karachi, Lahore, Pakistan.

From these incidents, it seems that the graph of social sensitivity has fallen sharply in the Muslim society and the finer details about Islam are being sifted through the public media. The exchange among the people is increasing. People are starting to keep facts. So these things need to be handled with great ease. So those who are the leaders of Islam have to decide that they want to move forward politically, they want to move forward as a jihadi group, they want to push the national sovereignty with the trust of the Ummah? If they want that, then this game of theirs is not going to work. In a civilized society, there is always room for discussion. If we want to move forward in a civilized society, then Islam must also create scope for discussion.