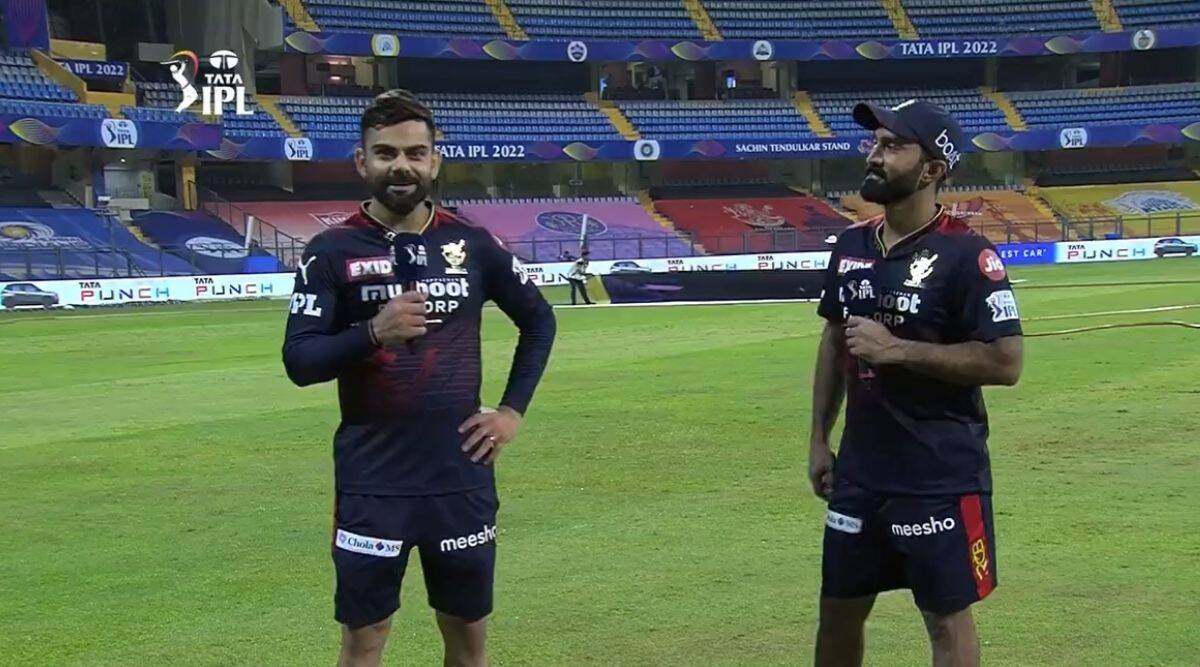 Former Indian cricket team captain Virat Kohli has praised Dinesh Karthik for his excellent performance in the current season of the Indian Premier League. He has said that his Royal Challengers Bangalore (RCB) teammate has made a strong claim to return to the national team. Dinesh Karthik is playing the role of finisher for RCB. He has scored 197 runs in IPL 2022 so far with an impressive strike rate of 209.57. He got out only once in 6 innings. He played an unbeaten 66 in 34 balls on Saturday i.e. 16 April 2022. On the basis of his innings, RCB defeated Delhi Capitals by 16 runs.

After the match, Kohli interviewed Karthik on iplt20.com (iplt20.com). During the interview, Kohli called the RCB wicket-keeper batsman the ‘Man of the IPL’. Kohli said it was a pleasure and an honor to see Karthik perform brilliantly in the competition.

Beginning the interview, Kohli said, “I haven’t done much in this IPL so far, but here I am. I am still here with ‘Man of the IPL’ ‘Man of the Moment’. It’s been amazing.

Kohli said, “I am here with the best performer of this season of IPL, for me it is wonderful. I wouldn’t say ‘long it can go on’ because it will happen and you are in that position and I can feel it. It is an honor to see you bat again. Thank you for helping us win.

The former captain of the Indian cricket team said that South African legend AB de Villiers, who played such a role in the team for a long time, would also be proud of Karthik. “I am very happy that DK (Karthik) is clear about his target. I can definitely tell you that in T20 cricket you have not only influenced RCB, but I am sure many people will be influenced by you at the international level as well. AAP has put forth a very strong claim (for the national team).

Virat Kohli Said, ‘You mentioned AB (de Villiers). I think AB must be proud to see you sitting at your home in Pretoria, finishing the match for us and bringing it to victory.

Let us tell you that Karthik last played for India in the ODI World Cup in 2019. The 36-year-old Karthik has made and dropped in the national team several times since making his debut in 2004. He has played 36 Tests, 94 ODIs and 32 T20 Internationals.

Dinesh Karthik has scored 197 runs in this IPL so far. However, where does he fit into this year’s T20 World Cup squad? Former New Zealand fast bowler Simon Dull has given his opinion on this. Simon Dull believes that Karthik should play T20 matches in Australia as a backup batsman as he is in excellent form at the moment.

He said, ‘I will be going to DK (D) later this year.Dinesh KarthikWas thinking of going to Australia. India has got Rishabh Pant as full time wicketkeeper and KL Rahul as backup wicketkeeper. So you can’t take DK as wicketkeeper! Maybe he now fits into the team as a backup batsman.

“He can bat at number 6 or 7… even at number 5. He is playing very confidently at the moment. He has all the skills to play when his team is in trouble. Also find boundaries. I think this is the difference between some other batsmen and DK at present.