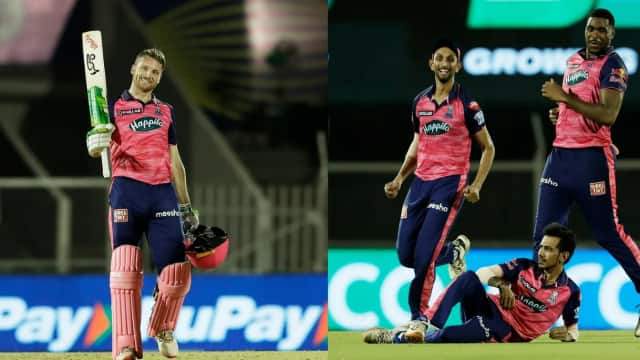 The 30th match of IPL 2022 ended in a thrilling fashion. Rajasthan Royals defeated Kolkata Knight Riders by 7 wickets in this match but till the end there were ups and downs in the match. After losing the toss, going to bat first, Rajasthan Royals made a huge total of 217 runs on the basis of Jos Buttler’s century of 103 runs. Chasing the target, the entire team of KKR kept fighting till the end, but they were bundled out for 210 runs in 19.4 overs. Captain Shreyas Iyer played a captaincy innings of 85 runs for KKR. At the same time, Yuzvendra Chahal, taking the first hat-trick of the season, showed the way to the pavilion to 5 KKR batsmen. With this win, Rajasthan Royals have taken a giant leap in the points table and have reached the second position. On the other hand, KKR are at 6th position after a hat-trick of losses.

Rajasthan Royals were given a stormy start by Jos Buttler and Devdutt Padikkal (24) adding 97 runs for the first wicket in 9.4 overs. Sunil Narine got the first success for KKR by bowling Padikkal. After this, captain Sanju Samson, who came to bat, scored 38 runs in 19 balls with the help of 3 fours and two sixes. At the same time, Butler also scored his second century in IPL 2022. This is Butler’s second century in the 6th innings of this season. Buttler faced 61 balls during this period and hit 9 fours and 5 lofty sixes. In the end, Hetmyer scored 26 runs in 13 balls to take the team to a score of 217.

Chasing the target, Kolkata Knight Riders did not have a good start. Today the team sent Sunil Narine to open with Finch in place of Venkatesh Iyer. Narine was run out without playing a ball and KKR suffered a setback on the first ball of the innings. After this, Finch (58) got the support of captain Iyer and there was a partnership of 107 runs for the second wicket between the two.

After the dismissal of Finch, Captain Iyer was scoring runs from one end but wickets were falling continuously from the other end. While Rana scored 18 runs in 11 balls, Andre Russell was on the golden duck out. On the fourth ball of the 17th over, Chahal trapped Iyer in front of the wicket and got out LBW. This proved to be the turning point of the match. Chahal then took the first hat-trick of the season by dismissing Mavi and then Pat Cummins.

From 180/5, KKR’s score was reduced to 180/8 after three balls. After this, Umesh Yadav, who came to bat, again filled the match with 20 runs in the over of Trait Boult. Famous Krishna bowled the 19th over and conceded just 7 runs. In the last over, Kolkata needed 11 runs to win. But Obed McCoy ended KKR’s innings by dismissing Jackson and Umesh Yadav. Chahal was awarded the Man of the Match award for his excellent performance.