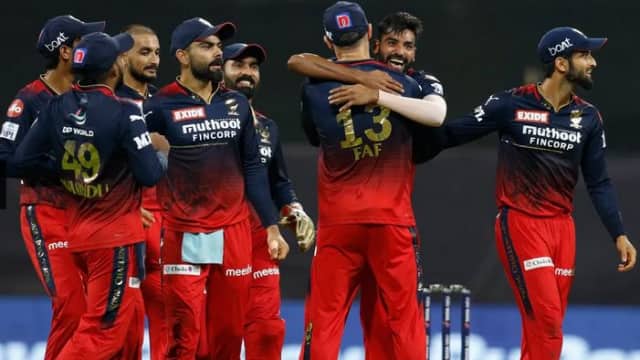 Bangalore posted a challenging score of 189 for five in 20 overs and restricted Delhi to 173 for seven. Bangalore thus secured their fourth win in six matches, while Delhi suffered their third loss in five matches. Bangalore has now moved to the third position in the table with eight points.

Maxwell made 55 runs off 34 balls with the help of seven fours and two sixes to rescue RCB from the initial blow. Later, Karthik (66 not out off 34 balls, five fours, five sixes) shared an unbroken partnership of 97 runs for the sixth wicket with Shahbaz Ahmed (32 not out off 21 balls, three fours, one six). RCB added 69 runs in the last four overs and made a strong score of 189 runs for five wickets.

In reply, Delhi could only manage 173 runs for seven wickets. David Warner played an impressive innings of 66 runs in 38 balls with the help of four fours and five sixes. Captain Rishabh Pant scored 34 runs in 17 balls but the other middle-order batsmen did not play.

RCB bowlers made a great comeback in the middle overs. Apart from this, his fielding was also good. For him, Josh Hazlewood took three for 28 and Mohammad Siraj took two wickets for 31 runs.

This is RCB’s fourth win in six matches to move into the top three. This is Delhi’s third defeat in five matches. Faf du Plessis made frequent changes in the bowling in the powerplay itself but the Delhi batsmen, especially Warner, made a good effort to put pressure on him. Warner meanwhile hit three sixes as Delhi made 57 for the loss of Prithvi Sauv (16 off 13 balls) in the Powerplay.

Warner completed his 52nd fifty in IPL in just 29 balls. Mitchell Marsh (14 off 24 balls) was struggling to score runs and as the net run rate was rising, Warner hit a six and four on Harshal Patel, but in an attempt to switch hit to Wanindu Hasranga’s delivery, he Became footstepped.

DC vs RCB: Wankhede Stadium echoed in the name of Kohli, Kohli, when Virat caught Rishabh Pant with one hand

Hasranga dropped a difficult catch when Pant was on two, but Marsh’s struggling innings came to an end soon after being run out while Rovman Powell failed to open the account while Lalit Yadav (1) also returned to the pavilion in the same over from Hazlewood. Went.

In such a situation, Shardul Thakur and Pant raised hopes by hitting sixes on Hasranga. Pant also hit a six on Siraj but Virat Kohli made the RCB supporters drunk by taking a one-handed catch from him. Delhi’s true hope was also ended as Thakur (17 runs in nine balls) waved the ball in the air.


Earlier, RCB had not had a good start. Opting to bat first after losing the toss, RCB had lost both opener Anuj Rawat (nil) and captain Faf du Plessis (eight) within the first three overs, taking the score to 13 for two.

Delhi continued to bowl tight and conceded 40 runs in the powerplay despite some sloppy shots from Maxwell. RCB lost the wicket of Virat Kohli (12 runs in 14 balls) on the same score, who was run out beautifully by Lalit Yadav.

Maxwell hit Kuldeep Yadav in the ninth over for the first six of RCB’s innings. In this over, he took a total of 23 runs with the help of two sixes and two fours and then hit a four on Shardul Thakur to complete his half-century in 30 balls. Kuldeep, however, took revenge in the next over and got Maxwell caught at long on.

Suyesh Prabhudesai (six) had already taken his way to the pavilion. When Karthik was on five, Pant dropped his catch. He celebrated it by hitting two sixes on Khaleel Ahmed and when Mustafizur Rahman reached the 18th over, he scored 28 runs in this over with the help of four fours and two sixes. He completed his fifty in just 26 balls.

VIDEO: Ishaan Kishan got out on fire, got angry and did this act on the field, may be fined

Karthik sent the next ball for six runs after avoiding being dismissed leg before with the help of DRS off Shardul. Shahbaz, who has been playing the role of an ally till now, hit his only six in the last over of Kuldeep’s innings.