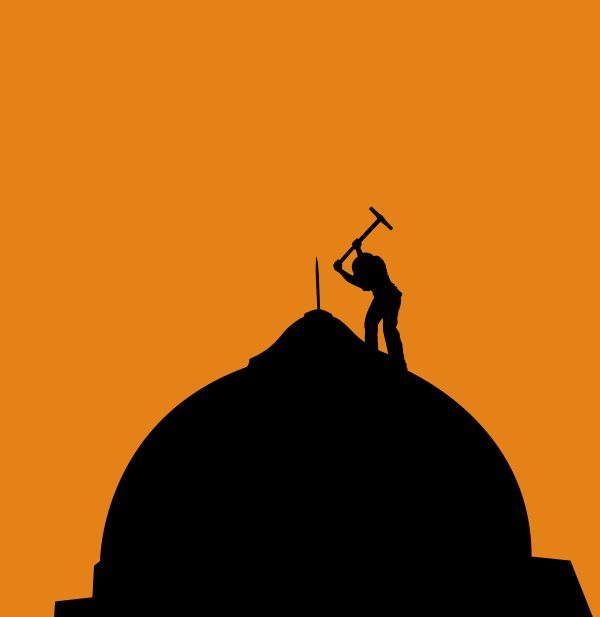 India’s Hindutva Groups Have the Gyanvapi Mosque in Their Crosshairs

Almost 30 years after Hindutva activists destroyed the 16th century Babri Masjid in Ayodhya in the northern Indian state of Uttar Pradesh, they have their sights set on another mosque in the state – the Gyanvapi mosque in Varanasi.

They are claiming that a shivling (a phallic symbol that represents the Hindu deity Shiva) has been found in the mosque complex.

Their argument is that the Gyanvapi mosque stands on the ruins of the 16th century Kashi-Vishwanath temple and that this temple was partially destroyed in 1669 on the orders of Aurangzeb, the sixth Mughal emperor.

In August 2021, a petition was filed in the court by five women who sought an order to allow them to worship at the Hindu temple behind the Gyanvapi. Early this month, the lawyer representing these women claimed that a shivling was found in the pond inside the mosque complex.

Hindutva organizations have crafted a very successful strategy to erase Muslim culture, religion, and heritage from India. They are drawing on the strong support they receive from Prime Minister Narendra Modi’s Hindu nationalist government, which is set to complete eight years in power later this month.

While Indians are grappling with a string of serious problems including inflation, unemployment, and a tattered social fabric, the ruling Bharatiya Janata Party (BJP) and the Hindutva organizations it is aligned with are fueling anti-Muslim hate-crimes and assiduously pursuing seemingly legal pathways to further their strategy of removing Muslim heritage.

Over the decades, Hindutva activists have laid claim to several Islamic monuments, shrines, and mosques, asserting that they were once Hindu temples. In independent India, this pattern first appeared in December 1949, when activists placed an idol of the Hindu deity Ram inside the premises of the Babri Masjid in Ayodhya.

Their placing of the Ram idol inside the mosque was an act of desecration and triggered tension to such an extent that the government had to take control of the mosque to quash communal tensions. The court ordered people not to remove the idol and also stopped the structure from being used as a mosque.

In the decades that followed, both Hindu and Muslim groups filed claims over the disputed site. Hindus argued that Ram was born at the site and that a temple existed there, which was destroyed by the Mughal emperor Babar, who had built a mosque instead. Hence, while Hindus believe this to be the Ramjanmabhumi, for Muslims this was the Babri Masjid.

In 1986, a local district court allowed Hindus to worship at the site. Then-Prime Minister Rajiv Gandhi allowed the Vishwa Hindu Parishad (VHP), a Hindutva organization, to conduct a stone-laying ceremony on the land next to the Babri Masjid. In 1990-91, Bharatiya Janata Party leader LK Advani began a “rath yatra ‘”(chariot parade) for the construction of a Ram temple at the disputed site.

The mobilization of thousands of Hindutva workers from different parts of the country triggered violence and riots, culminating in the destruction of the Babri Masjid on December 6, 1992. In the years thereafter, the issue of a Ram temple has come in handy for the BJP to mobilize violence and votes. Construction of a temple here was a pledge the party made at successive elections.

This campaign gathered steam after the BJP came to power in 2014.

In 2019, the Supreme Court of India ruled that the land would be allotted to the Hindu community. Muslims were offered an alternate site to build a mosque. This was a victory for Hindutva but at the cost of Muslims; A communally and politically skewed form of justice was offered to them by India’s highest court.

The victory over the Ram temple has empowered Hindutva forces to pursue other destructive campaigns. The latest is a dispute over the Gyanvapi mosque.

The issue is in the courts with the filing of the petition last year. Will the case go the Babri way?

While the Ayodhya-Babri Masjid case was excluded from the domain of the Places of Worship Act, the Gyanvapi site’s status as a mosque is secured under this Act. Will India’s courts violate that Act to change the status of the Gyanvapi site?

On May 12, a Varanasi court ordered the immediate sealing off of the pond after a plea from the petitioners. It directed the Varanasi District Magistrate to ensure that the area was made a “no-go” zone. The court mandated a three-day videography survey of the Gyanvapi mosque complex.

On May 17, the Supreme Court instructed the Varanasi Court to ensure the protection of the area where the shivling was found without hampering the right of Muslims to enter and worship at the mosque in the complex.

On the face of it the apex court ruling seems even-handed. However, it ignores the provisions of the Places of Worship (Special Provisions) Act 1991, which protects the status quo in mosque complexes.

It has raised fears among Muslims that the Supreme Court order is preparing the way for Hindutva activists to lay claims to and challenge Muslim control over yet another mosque complex in the country.

Meanwhile claims are being filed in other courts with regard to other disputed temple / mosque sites, including the Shahi Eidgah in Mathura. In a settlement overseen by a local court and district authorities, Muslims handed over about half of the land of the Shahi Eidgah (mosque) in 1962 to a trust headed by the VHP. Hindutva groups built a giant temple here, completely overshadowing a decrepit mosque that has been relegated to a corner. Despite the 1962 agreement, petitioners are now asking for the remaining half of the area; in Modi’s India the courts could well hand them the remaining land.

Hindutva groups have time and again manipulated the law to their benefit, using the courts when it suited them and circumventing the law when it doesn’t.

The All India Majlis-E-Ittehadul Muslimeen (AIMIM), a party that represents the interests of Muslims, has said that the Varanasi court’s order allowing the survey and videography inside the Gyanvapi mosque is a “blatant violation” of the Places of Worship Act, 1991. “If the survey continued,” it warned, “India is likely to see another repeat of what was witnessed before, during and after the Babri Masjid demolition. ”

Speaking to The Diplomat, AIMIM’s Varanasi district president, Zahid Hashmi, said, “This whole controversy is extremely unnecessary and is only meant to pain and humiliate the Muslim community. The lower courts had no business to intervene and seal the area. On top of this, the fountain they are claiming as a ‘shivling’ is clearly a water dispensation mechanism meant for ponds in most mosques, found not only in India but around the world. ”

The controversy over the Gyanvapi Mosque is not the only case where Hindutva groups are seeking to erase Islamic heritage, religious, and cultural sites across India. In the name of reclaiming “Hindu heritage,” Hindutva groups are laying claim with renewed energy over other Islamic sites too.

Recently, Hindutva activists claimed that the Taj Mahal in Agra and the Qutub Minar in Delhi contained idols of Hindu deities.

In May, members of a Hindu forum named the Narendra Modi Vichar Manch sought permission from the Karnataka administration to offer prayers at the 200-year-old Jamia Masjid in Srirangapatna, which they claimed was sitting atop the ruins of a Hanuman temple.

Other right-wing parties are joining in. On May 17, the Maharashtra Navnirman Sena (MNS) spokesperson Gajanan Kale called for the destruction of the tomb of Mughal emperor Aurangzeb.

The strategy of Hindutva forces in Modi’s India has become clear. They are hell-bent on stripping India off its constitutionally-prescribed secular character. They are able to push their agenda with the support of the BJP government. Marking Islam and its followers as the enemy, such forces have been successful in alienating the common Muslim, who has no recourse to fall back on.

Hindutva radicals are seeking to rewrite history by reclaiming and rebuilding Hindu temples that they argue were destroyed during Muslim rule. This shoots many birds with a single stone – it uses Hindu folklore to demonize Muslims, uses religion to justify violence against Muslims, and furthers their goal of pushing Muslims to the margins of India.