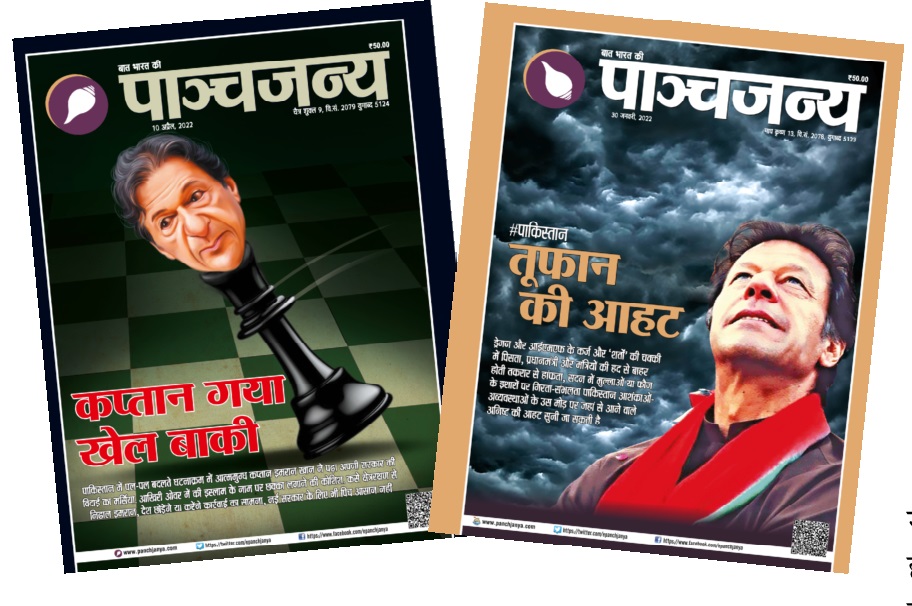 Imran, the letter and the parliament

The thing that was not mentioned in Fasane
That thing has bothered him very much.
It is said that there is no place for boredom in the public life of Pakistan. Everyday there is something or the other going on somewhere or the other. The spectacle is also such which is not even thought of in any other country of the world. The politics of Pakistan is also not untouched by this.

The speaker asked Law Minister Fawad Chaudhry to speak. Fawad Chaudhry took out a paper and read it. While reading, he referred to the same letter which we had mentioned in the previous issue and he urged the Speaker to quash the no-confidence motion as it is part of a foreign conspiracy, saying that the no-confidence vote is part of a foreign conspiracy and All those who propose this are traitors to the country. As soon as Fawad Chaudhry sat down, the Speaker took out a written order from his pocket and read it out and told that the no-confidence motion is set aside as a conspiracy. Saying this he went on adjourning the Parliament indefinitely. For a while the opposition parties could not understand what had actually happened to them.

pre-planned spectacle
Only a few moments had passed that Imran Khan came on television and asked the President to dissolve the Parliament. Surprisingly, when Imran Khan was speaking in this broadcast, a voice from behind was correcting his choice of words and it was also heard through the mic of the television. Which made it all the more clear that all this was nothing but a pre-planned drama. Soon after, a notification was issued by the President of Pakistan that the Parliament had been dissolved and elections would be held within three months. At the same time, he also asked the Prime Minister to continue in his post till then. After this the people of the ruling party walked out of Parliament. But what is that Pakistani spectacle that does not take new turns till the end.

twist in the spectacle
According to the rules of the Pakistani Parliament, there is such a provision that if the Speaker and the Deputy Speaker are not available, there is a six-member panel from amongst the members of the Parliament, from whom any one can proceed with the proceedings of the House. Since the quorum of the House was full, the members proceeded with the further proceedings with Ayaz Sadiq, a member of this panel, in place of the Speaker. As you know, the opposition needed 172 members to prove the majority and the voting which was conducted at this time showed 197 members of the opposition. With this the opposition proved its majority.

Imran Khan’s future is in the dark. They have lost their government in Punjab due to their indifference. Meanwhile, his former supporter Aleem Khan and former Punjab governor Chaudhary Sarwar have begun to reveal all Imran’s secrets to the public, including his corruption stories. Not only this, the name of Imran’s third and current wife Bushra Begum has also been included in the corruption charges.

Meanwhile, the judges of the Supreme Court came to know about the action taken by the Deputy Speaker and they went and met the Chief Justice and informed him about the seriousness of the situation, due to which the Supreme Court, taking suo moto cognizance of the incident, directed all the parties concerned to the Supreme Court. asked to come. On the same day a panel of three judges was formed which was given the responsibility of hearing the case. Even though the matter was constitutional, the second most experienced Supreme Court judge, Kazi Faiz Isa, was not included in this bench. When there was opposition from the opposition, the number of members of the bench was increased to five but Justice Isa was still not included. Remember, this is the same Justice Isa who in the Faizabad picketing decision ordered the army to punish some of its officers for their involvement in supporting the strike. After this, all efforts were made to sack Justice Isha from his post for a long time, but eventually he was acquitted of all the charges and would become the Chief Justice of the Supreme Court of the country next year. This is the situation that the Army and the ISI want to avoid. They consider Justice Isa to be an obstacle in their path.

At present, the Supreme Court is hearing the matter from April 3. The way the Supreme Court is postponing this matter every day, a new debate is being born from it. The judges who have been elected in this case are believed to have been giving statements against Nawaz Sharif’s family and leaders of the Pakistan Peoples Party. The observations of the judges during the hearing of this case also point to this. But on the other hand, the matter is so straightforward and clear that it will be difficult for the judges to decide in favor of the Imran government.

Faiz Hameed’s game
You will remember the name of Lt Gen Faiz Hameed who was earlier the Director of ISI and was later sent to Peshawar as Corps Commander. The network he built during his four-year stint in the ISI is believed to continue to be used today. This gives a sense of division in the army. It is believed that Faiz Hameed’s group has a hand in the selection of judges. Imran Khan wanted to make Faiz Hameed the next Chief of Army Staff, but before his intention was fulfilled, his government fell apart. Through these antics, Faiz Hameed’s group wants to prolong this constitutional crisis so that Imran Khan can get enough time to show himself in the upcoming elections as a leader who has become the victim of some political conspiracy.

Imran’s layers started opening
If seen, Imran Khan has been successful in this to some extent, but in fact, the future of Imran Khan is in the dark in the near future due to the economic condition of the country and the discontent among the people due to rising inflation and lack of employment. Meanwhile, he himself has lost his government in Punjab due to his own indifference. Meanwhile, former Imran Khan’s supporter Aleem Khan and former Punjab Governor Chaudhary Sarwar have started revealing all the secrets of Imran Khan to the public, including his corruption stories. Not only this, the name of Imran Khan’s third and current wife Bushra Begum has also become involved in the allegations of corruption. It is being told that a senior ISI officer was removed from his post by Imran Khan because he had clearly told him that his wife was taking diamond necklaces as a bribe. Her friend Farha Khan, who was her aide in all such bribery of Bushra Begum, has fled to Dubai.

You will be surprised to know that despite the President’s order, the Cabinet Secretariat of Pakistan has not issued a notification for Imran Khan to remain as the caretaker Prime Minister for four days. It believes that there is a no-confidence motion against the Prime Minister and the new Prime Minister has not been elected yet. The opposition has proved its majority and wants to form its own government.

Ministerless Pakistan
There is no prime minister, no parliament, no cabinet in Pakistan since last April 3, 2022. You can say that Imran Khan is the caretaker Prime Minister, but you will be surprised to know that despite the President’s order, the Cabinet Secretariat of Pakistan has not issued a notification for Imran Khan to remain as the caretaker Prime Minister for four days. It believes that there is a no-confidence motion against the Prime Minister and the new Prime Minister has not been elected yet. An equal number of members are taken from the ruling and opposition parties in Pakistan to form a provisional government, but for four days the opposition neither gave any names nor became a part of this process. At the same time, the opposition has proved its majority and it wants to form its own government. The eyes of the whole world were fixed on the decision of the Supreme Court.

Deputy Speaker’s decision canceled
A five-judge bench of the Supreme Court, while delivering its verdict on Thursday, set aside the April 3 decision of the Deputy Speaker to dismiss the no-confidence motion and the subsequent dissolution of Parliament by the Prime Minister, terming it illegal. The Supreme Court in its order said that the Speaker in Parliament should complete the remaining action on the no-confidence motion at the earliest. About an hour earlier, the Cabinet Secretariat, on receiving information from the Supreme Court that the deputy speaker’s decision had been set aside, issued a notification in which it said Imran Khan Niazi was no longer the prime minister. With this, all the efforts of Imran Khan, due to which he was trying to increase the age of his rule, are now over. Imran Khan’s government was reduced to a minority at the end of March, but he was still playing a yen-ken-type drama of being in power, which had no legal recognition. Now the way has been cleared for the formation of a new government.