How the Coup Shattered the Image of Myanmar’s Military TOU 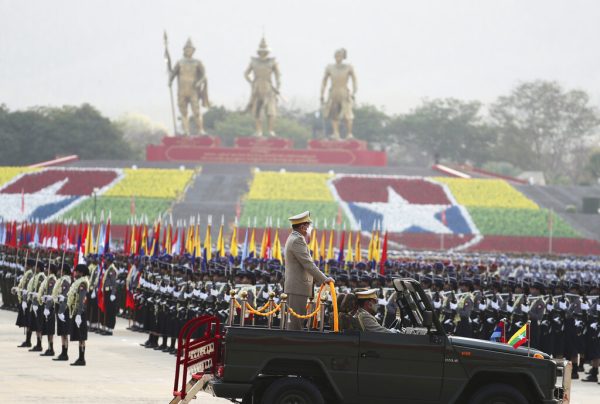 How the Coup Shattered the Image of Myanmar’s Military

People in Myanmar have been deeply critical of the Tatmadaw for decades, but their view of the military has changed in important ways since the early 2021 coup. Taking stock of public opinion toward the ongoing military’s brutalities requires moving beyond words like “critical” or even “hated” to capture the actual sentiment among civilians toward Tatmadaw. In Burmese culture, there are many words used to describe feelings on the spectrum running from “like” to “hate.” The two Burmese keywords I want to urge readers to focus on here, though, fall either beside or completely outside of this spectrum. These two words show how views of an organization held in very low regard already plummeted dramatically lower still as the Tatmadaw engaged in heinous actions.

The first word is ကြောက်စရာ (kjau zaja), referring to a fearful entity or thing. The Tatmadaw ruled much of heartland Myanmar by fear during the post-1988 era and had done so since 1962 in border areas with significant populations of ethnic minority groups. Aung San Suu Kyi’s 1991 book, “Freedom from Fear,” is telling. She called for Myanmar’s people not to fear the oppression of Tatmadaw. She also sought, in a philosophical vein, to teach those who inspired fear not to fear for the future if they relinquished power that was built by inducing fear in the public. Aung San Suu Kyi understands the Tatamdaw all too well – she was a political prisoner in the 1990s and now is again, but during the years leading up to the 2021 coup was an elected official heading a party that was formed to oppose but sometimes collaborated with the junta.

The second word relevant to the Tatmadaw’s image today is ရွံ စရာ (jun zaja). This word describes a feeling that goes beyond hate; it is not fear, but rather carries the connotation of loathsomeness and intense disgust. When Burmese designates something as being jun zaja, they no longer care about its existence. Jun zaja captures the status of the Myanmar Tatmadaw since the 2021 coup – as news from the country shows, even those with good reason to fear for their lives if they push back against the coup are doing just that.

If a person, an institution, or a thing is conceived as falling into this category, Burmese no longer treat that person or thing as something to like or to hate; the jun zaja is to be disregarded and ignored as worthless. People seek to erase it from their memory. A jun zaja entity possesses no attribute that is respectable; no ethical or moral properties; no value to the natural or human world. To state it viscerally, it is a thousand times worse than rotten feces populated with lauk kaung (fly maggots), which the Burmese metaphorically use to describe a person designated as jun zaja.

Why does the shift from fear to disgust when regarding the Tatmadaw matter? If an entity is to be feared, Burmese still assume that entity has some intrinsic value, even though it may represent something unjust or undesirable. When it generated fear, the Tatmadaw was seen as something that was not serving society as it should – but hoped remained that it could do so if reformed. Even the most self-serving, selfish, egomaniacal bully can potentially change.

If something is described as utterly disgusting or repugnant, on the other hand, Burmese see no moral compass to measure its value. Burmese people are no longer debating how to get the Tatmadaw to shift from fear-generating tactics to something else, as that would give it more credibility than they feel it deserves. They no longer want to change the Tatamdaw; they simply want it gone.

Right after the coup, the world wondered why Burmese people, especially Gen Z protesters, showed no fear in the face of the barbaric crackdowns of the Tatmadaw. The people regarding Tatmadaw as jun zaja entity is an explanation for the lack of fear.

By the end of March 2022, independent news organizations and NGOs in Myanmar and border areas reported the Myanmar military had murdered 1,735 people and arrested 13,171, in addition to bombing and burning down houses in villages and towns. An independent data tracking group reported that the Tatmadaw had by then burned down a total of 7,973 houses at 222 locations. Among those, 4,954 houses were in Sagaing Region, where local People’s Defense Forces are most active.

The United Nations Human Rights Council reported on March 15 that “Myanmar is facing violence on a massive scale. Arbitrary detentions, unnecessary and disproportionate use of force against peaceful protesters, extrajudicial killings and ill-treatment and torture in custody have accompanied Tatmadaw’s seizure of power. ” The UN also estimated that 440,000 people have been internally displaced from fleeing the Tatmadaw’s various military campaigns since the coup.

It may seem that the Tatmadaw achieved this notorious jun zaja status only after the 2021 coup, through its extrajudicial arrests, tortures, murders, and bombing and burning of villages in Myanmar. It can be argued that for the majority of ethnic minorities, however, the Tatmadaw already occupied jun zaja status for several decades, even before 1988. Therefore, it is important to understand how Burmese people’s perception of the Tatmadaw had been transformed rapidly under Min Aung. Hlaing to understand the Tatmadaw’s current status in Myanmar.

Three critical events have transformed the Tatmadaw’s image since Min Aung Hlaing’s rise to the top military post, which occurred at the same time Myanmar embraced a nominal transition to democracy with the first election in 2010 under the 2008 Constitution. The Tatmadaw-sponsored political party, the Union Solidarity Development Party, won the 2010 election, which was regarded by the United States as “neither free nor fair and fail[ing] to meet any internationally accepted standards. ” When the elected government took office, former dictator Senior General Than Shwe retired from the commander-in-chief post. General Min Aung Hlaing, who led the February 1, 2021, coup, was promoted to the commander-in-chief on March 31, 2011.

The first event that reshaped the Tatmadaw’s image under Min Aung Hlaing was the Myanmar police’s crackdown on the Letpadaung copper mine protests in Sagaing Region on November 29, 2012. Local people protested against land seizures and a lack of compensation by the Chinese state-owned company. Wanbao and the Myanmar military-owned Union of Myanmar Economic Holdings Ltd. The protests received widespread coverage in Myanmar media because land rights had become a major issue as the country opened up to the world and also because of the success of protests against other Chinese investment projects such as the famous Myitsone Dam, which was canceled by the government in 2011.

The Letpadaung protesters faced a brutal crackdown instead. Police reportedly also used phosphorous as chemical weapon against the protesters according to an independent lawyer group. According to Amnesty International, “Between 110 and 150 people were injured, with some suffering horrific burns and lifelong disability.” This event was the first test case for Min Aung Hlaing and his approach to handling dissent. Later, a government-appointed investigation commission headed by Aung San Suu Kyi reported nothing critical about the police crackdown.

The second event was the horrific campaign against Rohingya Muslims in Myanmar. The seeds were planted in June 2012 when local communal violence broke out in Rakhine State. That sparked nation-wide communal violence against Muslims in Myanmar in the summer of 2012. The violence eventually led to the Tatmadaw’s full-scale attack against Rohingyas in 2016 and 2017, which forced nearly 1 million Rohingya out of northern Rakhine to flee to neighboring Bangladesh. or by boat to Thailand, Malaysia, and Indonesia.

The world media reported the crisis with the images of burning villages and Rohingya fleeing from Myanmar military’s attack. Then-UN High Commissioner for Human Rights Zeid Ra’ad al-Hussein called the Myanmar military’s brutal attack “a textbook example of ethnic cleansing” at the UNHRC meeting on September 11, 2017. Later, the Gambia government accused Myanmar of genocide at the International Court of Justice, initiating the case on the basis of the erga omnes The character of the obligations enshrined in the Genocide Convention. Aung San Suu Kyi again defended the Myanmar military and tried to explain the mass exodus as communities, including Rohingya, fleeing from historically rooted armed conflicts in which Myanmar military was fighting against the Arakan Army and Arakan Rohingya Salvation Army.

Three years later on March 23, 2022, the United States designated the Rohingya case as genocide by the Myanmar Tatmadaw. Ironically, the US designation would not have happened if Myanmar’s nominal transition to democracy had not been disrupted. We can imagine an alternate history in which the members of parliament who were elected on November 8, 2021, were allowed to convene parliament in Myanmar and the transition to nominal democracy continued with the proposed 114 amendments to the 2008 constitution. The US and much of the rest of the world would likely have been content to keep quiet over the Tatmadaw’s abuses, just as Aung San Suu Kyi was.

Instead, Min Aung Hlaing staged a quiet military coup at 3:00 am on February 1, 2021. His coup and Myanmar military’s ongoing atrocities were the third critical event that turned the Tatmadaw into a jun zaja institution in Myanmar, but that status was well earned before then.

US Secretary of State Antony Blinken captured the throughline from Myanmar military’s atrocities against Rohingya in 2017 to post-coup situation, in the genocide designation. “Many of the military leaders who oversaw the genocidal campaign against Rohingya, including the generals who led it, were also involved in abuses committed against other ethnic and religious minority groups.” Blinken said. “They’re the same military leaders who overthrew Burma’s democratically elected government on February 1st, 2021 and seized power.” Myanmar people follow the same logic in dismissing the Tatmadaw as jun zaja, a repugnant institution.

This is not just semantics. The UN and international diplomats have to consider that the first step in the context of Myanmar’s ongoing political crisis has to be a dialogue about the Tatmadaw’s exit from future Myanmar politics. Only then will all the people of Myanmar trust the process and its outcomes, opening the door to ending the world’s longest-running civil war. The Tatmadaw is considered by Noeleen Heyzer, the UN secretary general’s special envoy to Myanmar, as a viable dialogue partner. It cannot be farther away from the truth.

There are some signs that even soldiers and their families see the Tatmadaw as an institution that is rotting. Within Myanmar military troops that are attacking villages and town throughout the country, the chain of command is weakened if not broken. Reports indicate that second ranking officer, General Soe Win, went around Sagaing Region and Kayah, Karen, and Shan States to give speeches urging soldiers and military families to follow the chain of command and to be united. According to former military officers who defected from the Tatmadaw, this kind of visit and speech are normally made by regional commanders, so Soe Win’s presence signals deep concern.

Most diplomats and international observers are state-centric; they are skeptical of the capabilities of ordinary people. Yet Myanmar people for the past 14 months have shown their resilience and denied the success of the coup led by the world’s 39th ranked military. They have done so without the direct material help of a single country on the planet. It is critical that diplomats understand the public memory of Myanmar people and their determination to seek a path for a genuine peace in Myanmar, as they have shown in the last 14 months. The determination and resourcefulness of the people are rooted in their regard of Tatmadaw as a jun zaja institution that cannot continue to exist in future Myanmar.