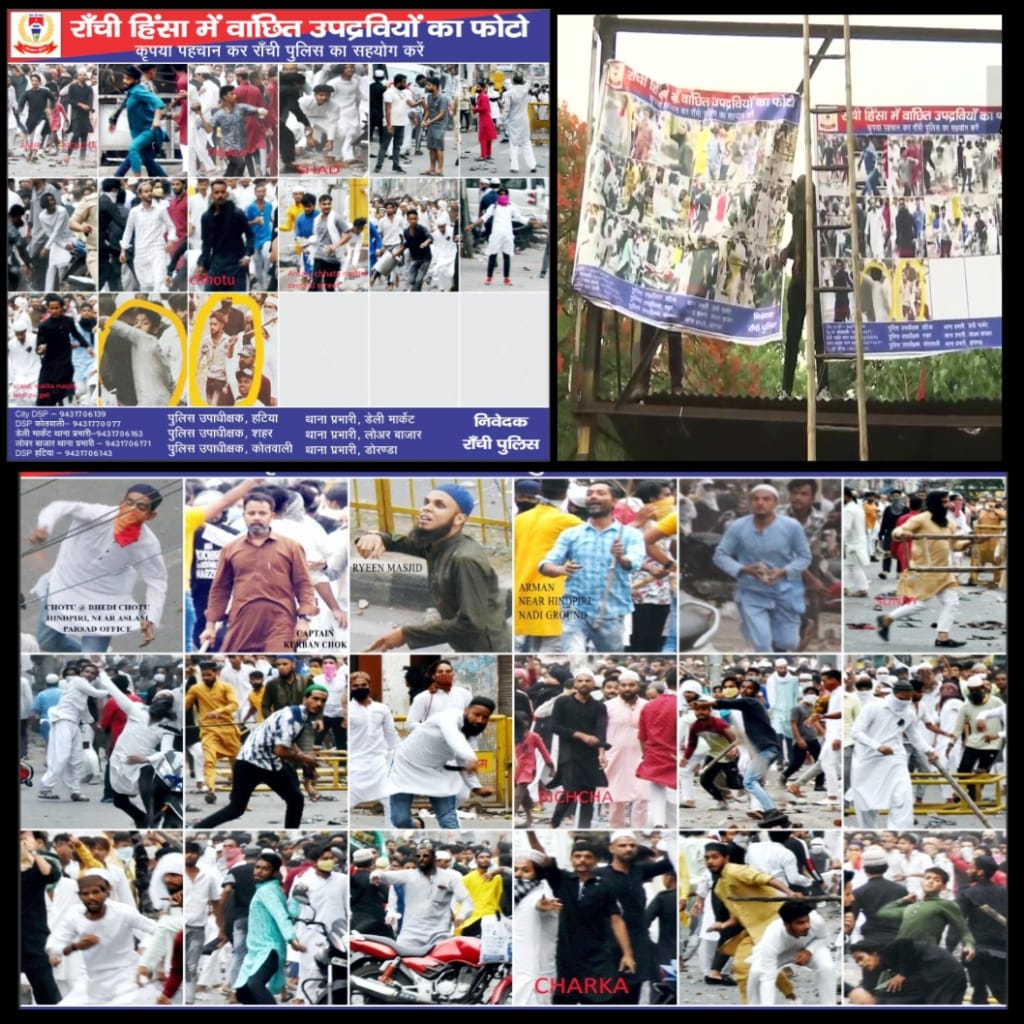 The police are doing their job in the case of violent protest on June 10 in Ranchi, the capital of Jharkhand, but the government is not deviating from the appeasement policy. People say that all the rioters have the protection of power that is why the police is not able to do anything.

On Tuesday, June 14, Jharkhand Governor Ramesh Bais had reprimanded the top police officials for not arresting a single rioter despite the passage of three days. Arrested the rioters as soon as possible. As per the instructions of the Governor, the Ranchi Police had put up posters of 31 rioters involved in stone pelting and vandalism on the main road and all the intersections on June 14. The poster went viral on social media. When the ruling JMM came to know about this, its leaders went out to remove this poster. According to senior JMM leader Supriyo Bhattacharya, “In this way the difference between Uttar Pradesh and Jharkhand will be erased, bitterness will increase among the people, the governor has his own sentiments, I will not comment on it.” After this objection, Ranchi police immediately removed the posters from all the intersections. On this, the police argued that some amendments have to be made in the poster, after which it will be put again.

It is not difficult to understand who the ruling JMM is working to support in the state. Even after such a big violent incident, the way the rioters are getting protection of power, it is not clear whether the government wants to maintain peace in the state or not.

Babulal Marandi, leader of the BJP Legislative Party, lashed out at the JMM government, saying that posters of rioters in the city were taken down in a few hours. It seems that the people in power are still engaged in addition and subtraction. The government is adopting a policy of appeasement and working to save the troublemakers. At the same time, he said that the media and newspapers have discharged their responsibility by running pictures and news of the rioters. Even after this, the government is neither discharging its responsibility nor allowing the police to do its job.

In a program, when journalists asked Chief Minister Hemant Soren questions in the Ranchi violence case, Hemant Soren said that mistakes are made in anger. Now, in such a case, why should it not be considered that the work of indirectly promoting miscreants is being done by the government itself.

However, Ranchi police have so far arrested 29 people in connection with the violent protest. It also includes 7 stone throwers undergoing treatment at Reims. Simultaneously, Doranda police have also arrested Nawab Chishti and Mo Jameel for inciting riots, vandalism and posting provocations. After the arrest of Nawab Chishti, a picture of him went viral on social media in which Congress MLA from Jamtara Irfan Ansari can also be seen with him. Let me tell you that it was Irfan Ansari who strongly opposed the police action and spoke of giving compensation to the rioters.

It is noteworthy that more than 5000 people were involved in the riots that took place on June 10. Two boys (Mudassir and Sahil) were killed in this riot. In this, 12 miscreants along with 12 policemen were injured. Police suspect that PFI may also be involved in this incident. At the same time, it has been revealed that in this riot, 10 to 12 people from Saharanpur in Uttar Pradesh had reached Ranchi and were inciting the Muslim community to riot. It is being said that radical Muslims from many districts of Jharkhand including Khunti, Lohardaga, Pakur, Dhanbad joined the demonstration. He made the demonstration even more violent. Hindu temples and their homes were also targeted by these protesters. यह भी देखने को मिला था कि प्रदर्शनकारियों के मुस्लिम मोहल्लों से गुजरने के दौरान उन्हें रोकने वाले पुलिसकर्मियों पर मुस्लिम घरों की छतों से पुलिस के ऊपर पत्थर बरसाए जा रहे थे।

Even after all this, on the next day i.e. on 11th and 12th June, the rioters had tried to provoke violence in many places. The first of them, on the early morning of June 11, attacked the Shiv Mandir located just 200 meters away from the Hindpidhi police station with a petrol bomb and fled from there. After this, on June 12, Amit Kumar, a resident of Upper Hatia in Jagannathpur police station area of ​​Ranchi district, was killed by 18 to 20 radical Muslims because Amit had posted a video of the June 10 riots on social media and sided with Jharkhand police. .

The BJP leader pleaded for his life

Regarding the death of Mohammad Mudassir Alam involved in the riots, his father Mohammad Parvez has accused other people, including policemen, of killing his son at the Daily Market police station. BJP leader Bhairav ​​Singh has also been deliberately implicated in this application. For your information, let us know that this is the same Bhairav ​​Singh, who on June 10, while applying to the DGP on WhatsApp, pleaded to save his life. However, Bhairav ​​Singh, while filing a case in the Ranchi court, has said that his image is being tarnished and a conspiracy is being hatched to assassinate him after the recent violence in Ranchi’s Main Road. Bhairav ​​has also accused Tablighi Jamaat, Jharkhand Muslim Youth Forum, Sofia and a young man named Parvez of threatening to kill him.