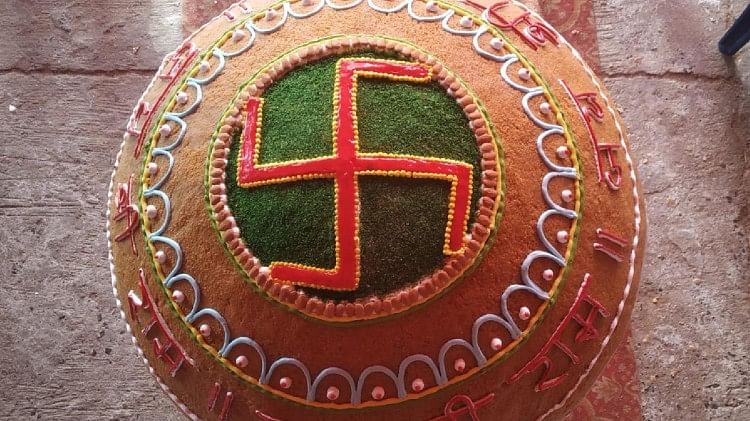 For the first time in Madhya Pradesh, one ton of Mahaladdu will be offered to Hanuman ji. On the occasion of Hanuman Janmotsav at Pachmatha Dakshin Mukhi Hanuman Temple in Jabalpur, the temple committee has decided to offer 1 ton Mahaladdu to Bajrangbali. Artisans from three states have completed the manufacture of laddus on time. Let us tell you about from making laddus to distribution of prasad.
Mahaladdu ready in 56 hours

The confectioners of Maharashtra and Madhya Pradesh have worked together for 3 consecutive days to make 1 ton Mahaladdu. The special decorations on the laddus have been done by the artisans of Kolkata. On the day of Ekadashi, with the worship of Annapurna, the construction work of laddus was started. Artisans from Madhya Pradesh and Maharashtra have shaped the Mahaladdu in 56 hours. After the construction of Mahaladdu, revered Jagadguru Sukhanand Dwaracharya Swami Raghav Devacharya Maharaj established it by worshiping the laddu. At present, Mahaladdu has been kept for the devotees’ darshan in a special kadhai from Bhavnagar in Gujarat. Coolers have been installed in the temple so that Mahaladdu does not get spoiled by the heat.

About 600 kg sugar, 250 kg gram flour, 12 tin ghee, 5 tin oil, 15 kg dry fruits have been used to make one ton of Mahaladdu. To commemorate the completion of 22 years of the Pachmatha Hanuman Mandir Committee, this year one ton of Mahaladdu is being offered to Ramlala in the temple. For the last two years, due to the corona epidemic, events could not be organized, so this year the temple committee has decided to organize a grand event.

56 Bhog will be offered on Hanuman’s birth anniversary

On Saturday, on the occasion of Hanuman Janmotsav, 56 bhog will be offered to Hanuman ji at 9 pm. Along with 56 bhog, 1 ton of Mahaladdu will be offered.
Prasad distribution will start with the first aarti

With the worship of the temple in the morning on the day of Hanuman birth anniversary, the work of distributing prasad to the devotees will start. The women of the adjoining area are making about 50 kg of laddus. Which will be distributed to the devotees from morning.

Prasad will be distributed continuously

After offering Mahaladdu to Hanuman ji, prasad will be distributed continuously by the members of the committee. The committee has arranged coaches for distributing prasad to about 5 thousand devotees, through coaches, prasad will be delivered to those devotees who are not able to come to the temple. The temple committee arranged more materials for the manufacture of laddus so that no devotee had to return empty handed from the temple without taking prasad.