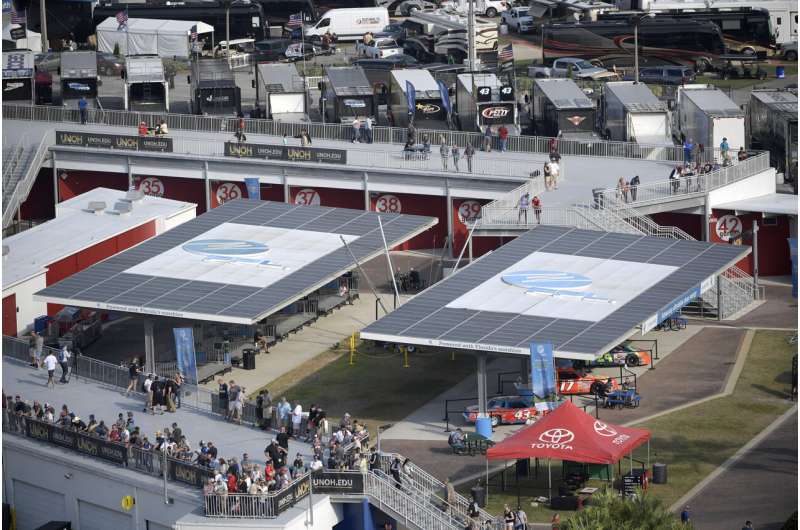 Florida’s largest electricity provider has announced plans to eliminate its carbon emissions by 2045 by halting its fossil fuel usage and greatly increasing its reliance on solar energy, including using it to turn water into hydrogen to power its generating plants.

Florida Power & Light, which serves 5.7 million homes and businesses or about half the state, said the multibillion dollar plan will not result in any price increases beyond what would be anticipated normally.

FPL’s parent company, NextEra Energy, said in its announcement this week that when its “Real Zero” plan is fully implemented 23 years from now, 83% of the utility’s electricity will be generated by solar, including “green hydrogen,” or come from battery storage from periods when excess power is produced.

Green hydrogen is a process where solar power is used to break apart water molecules into hydrogen and oxygen. That hydrogen is then used as a fuel source, eliminating the company’s use of natural gas. Most of the solar facilities will be built on converted, unused farmland in the central part of the state.

The company says another 16% of FPL’s power will be generated by its two current nuclear plants and 1% from renewable natural gas, which is created from biomass such as plant waste. It has set five-year goals starting in 2025 that it says will allow environmental groups and others to audit its progress. The plan still must be approved by the state utility commission.

FPL spokesman Chris McGrath said Wednesday that the plan is a continuation of the company’s move since 2001 to reduce its carbon emissions. At that time, about a quarter of its electricity was generated by burning oil and coal, but that has been eliminated in Florida. A Georgia coal plant in which FPL owns a 25% stake will close by 2028.

Today, about two-thirds of FPL’s power comes from natural gas, which generates carbon emissions but less than oil and coal. Another 20% comes from nuclear, 4% from solar, while the rest comes from the Georgia plant and other sellers.

“This is a goal that we are setting because we think the technology exists and it can be done in a cost-effective way for our customers,” McGrath said. Wind power will not be used in Florida because that would require purchasing expensive coastal property to erect turbines, a move that would also be opposed by the tourism industry.

Rising levels of greenhouse gases are increasing global temperatures and fueling extreme weather, from wildfires to violent storms. The burning of coal, oil and natural gas for energy production is a major contributor and UN Secretary-General Antonio Guterres has warned that the public is “firmly on track toward an unlivable world,” unless emissions fall faster than countries have previously committed.

Harrison G. Fell, a senior researcher at Columbia University’s Center on Global Energy Policy, said FPL can reach its goals by 2045, “but it will not be without challenges and some of the interim targets may be more difficult to meet.”

For example, he said, FPL’s goal to double its solar production by 2025 could run into problems finding supplies and production sites and then connecting those sites to the grid. He said the Biden administration’s policies that have lowered tariffs on imported solar equipment should help, but rising prices for raw materials could hamper FPL’s plan.

Still, he said, eliminating its use of natural gas might benefit FPL as the fuel’s price is soaring and could remain high.

“If that’s the case, becoming less natural gas reliant is not only a good environmental move by FPL, but may also prove to be a good long-run, low-cost energy production strategy as well,” Fell said.