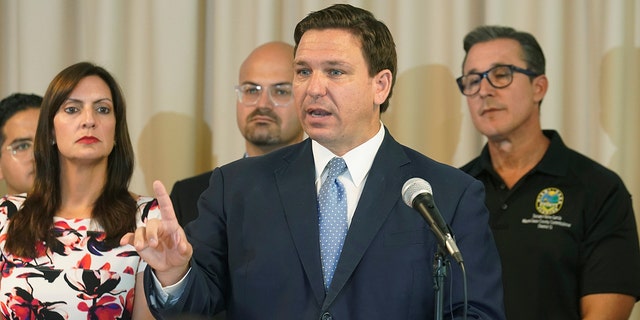 Florida rejects 41% math textbooks to include CRT, most intended for K-5 students: ‘Unacceptable’

The Florida Department of Education (DOE) on Friday rejected 41% of math textbooks submitted for use in state public schools, citing complex gender theory and other issues with texts.

Republican Florida Gov. Ron Desantis has pushed for better education standards and practices in the state. Florida called for textbook submissions from publishers in 2021, in line with Descentis’ 2019 Executive Order, aimed at removing common core standards in the state. Rejected textbooks were “unacceptable or prohibited with Florida’s new standards.”

The rejection rate was the highest at 41% History of Florida.

Dentis signed into law a ban on 15-week abortions

“It appears that some publishers tried to paint a coat of paint on an old building built on the foundation of a common core, and to try to inspire concepts, such as the need for race, especially for bachelors, for elementary school students,” Descentis said in a statement accompanying him. Was. Advertising. “I am grateful that Commissioner Corcoran and his team at the department have carried out such a thorough inspection to ensure that these textbooks comply with the law.”

In this August 10, 2021, photo, Florida Governor Ron Descentis answers questions about opening a school and wearing a mask in Surfside, Fla. Students are required to mask up when they return to school about whether top Republicans are fighting school districts in urban, heavily democratic areas of their respective states. (AP Photo / Marta Lavender)

The DOE clarified that each major math course and grade is covered by at least one approved textbook.

The DOE said in the announcement that “the largest number of books were rejected for the K-5 grade level, where an alarming 71 percent did not align properly with Florida standards or included restricted topics and unsolicited strategies.”

The DOE also noted that publishers can appeal their denials.

The move comes weeks after DeSantis signed the Parental Rights in Education Act, which barred teachers from teaching children between kindergarten and third grade about gender identity or sexual orientation.