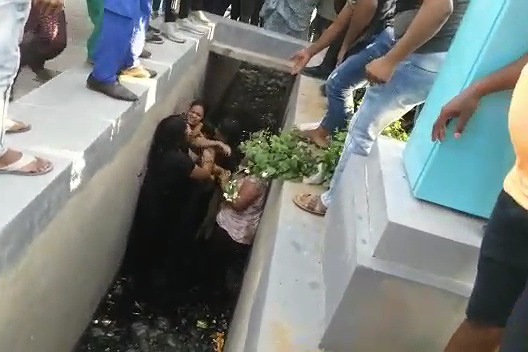 Quarrel at petrol pump between two families over property dispute.

Videos of a fight between two parties at a petrol pump in Beawar of Ajmer district have come to the fore. In the video, people from two sides are fighting with each other. Along with this, the women of both the sides also fell in the dirty drain and started scuffle with each other. Seeing the fight escalating, a gathering of people gathered around the petrol pump. As soon as the information was received, Beawar City Police Station reached the spot and the matter was pacified.

According to Beawar City Police Station Officer Surendra Singh Jodha, around 7 pm on Wednesday, there was a fight between two families over a property dispute at Naira Petrol Pump located on Udaipur Highway. The quarrel escalated so much that a scuffle broke out between the two families. According to the SHO, there is a dispute between the owner of Naira Petrol Pump Narendra Kumawat and his late brother’s wife Sangeeta Kumawat regarding the property near the petrol pump.

On Wednesday, Sangeeta Kumawat along with her brother and others reached the petrol pump and started a ruckus. The commotion increased so much that Sangeeta Kumawat and her family members started scuffles and vandalized. A crowd gathered to watch the long commotion. Some people also tried to intervene but the agitated families did not listen to anyone. As soon as the information was received, Beawar City Police Station Officer Surendra Singh Jodha reached the spot with the help of his police station and the matter was pacified. According to the SHO, both the parties have filed a case of assault, sabotage and molestation in the case. The police is involved in the investigation in the matter.

The women of both the families also scuffled in the drain.

Videos of a fight between two families at the Naira petrol pump in Beawar have surfaced. In the video, people of both the families are seen fighting. Seeing the ruckus increasing in the midst of the fight, a crowd of people gathered around. It is seen in the video that the women of both the families are scuffled even after getting down in the dirty drain located near the petrol pump. Meanwhile, a person also started beating God and the woman in the drain. Beawar City Police Station is engaged in investigation in this entire matter.