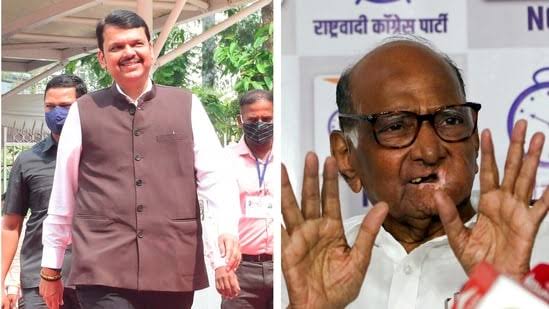 On April 14, Dr. On the occasion of Babasaheb Ambedkar Jayanti, former Chief Minister of Maharashtra Devendra Fadnavis exposed the politics of appeasement of Sharad Pawar. There is a lot of discussion about Sharad Pawar’s different statements and his criticism based on different facts.

In his 14 tweets, Fadnavis pointed out that Sharad Pawar’s role on issues like Article 370, Kashmir Files, Mumbai Bomb Blast, Ishrat Jahan encounter case was in line with the policy of vote bank appeasement. To this end, he has made these tweets referring to the news published in various newspapers and magazines. Attacking Sharad Pawar, the framer of the Indian Constitution, Dr. He has been accused of acting against the will and values ​​of Ambedkar.

In this context, when Sharad Pawar was asked how he felt when Fadnavis tweeted 14, he said, “I’m having fun.” Look at my president from the founding of my party, you will find the names of the presidents of different castes. My party is not limited to any one caste, it will be understood. Yet why accuse me of caste politics? Significantly, Fadnavis has accused Pawar of politics of appeasement rather than caste politics. But Pawar did not respond to vote bank politics.

1. Before mentioning Ambedkar Jayanti, the tweet showed that Sharad Pawar had a role in Article 370 as opposed to the role of the author of the Constitution. They say, ‘We have Dr. We are celebrating the birth anniversary of Babasaheb Ambedkar, who opposed the inclusion of Article 370 in the Constitution. But look what was said against their wishes and values’ – and the news reference to Sharad Pawar’s statement against the removal of Article 370 has been given as a reference. (Business Standard News)

2. We have heard many such statements of Sharad Pawar, which do not seem at all surprising. This policy of appeasement and politics and the exercise of dividing the society on the basis of caste is under the ideology of NCP.

5. Only Ishrat Jahan did not stop talking till he was acquitted. At Ishrat Jahan’s house his party leaders helped.

6 In 2012, at the Raja Academy rally in Azad Maidan, the act of breaking the immortal jawan flame was carried out and a shameful act was committed. The police commissioner was severely beaten.

7. Even though there is no provision in the constitution, when there was a NCP government in Maharashtra, vote back politics was done by giving 5% reservation to Muslims. (India Today News)

8. Sharad Pawar introduced the politics of division in our politics by saying that it is the minorities who decide who to defeat in the elections. (Deccan Herald News)

10. It would have been an ideal idea if the political parties had called for reforms, but they want the implementation of the Sachar Committee first. (news from firstpost.com)

11. Twelve bombs were detonated in the 1993 Mumbai bombings, but Sharad Pawar deliberately spread the lie that the 13th bombing took place in a Muslim-majority area. (India Today News)

12. Double standards. The Kashmir Files movie is based on true events, but why is it spoiled? Doesn’t this film match their secular agenda?

13 Kashmir Files film is not against any community. It is against those who turn their backs on the truth that torments people because doing so suits their secular agenda.

14 His actions and attitudes disrupt the harmony of society and he is Dr. Babasaheb Ambedkar’s is not acceptable in India at all.

On this subject, Shiv Sena spokesperson and MP Sanjay Raut said that nothing will happen with such efforts. Our government will last for the next 25 years. Such attempts will fail. Maharashtra Home Minister and NCP leader Dilip Walse Patil said in a tweet from Fadnavis that criticism of Sharad Pawar has become a habit. Do not take such criticism seriously. This will not do any good. Attempts by the BJP to link Sharad Pawar with Dawood have been repeated. Neither Pawar nor Nawab Malik has anything to do with Dawood.