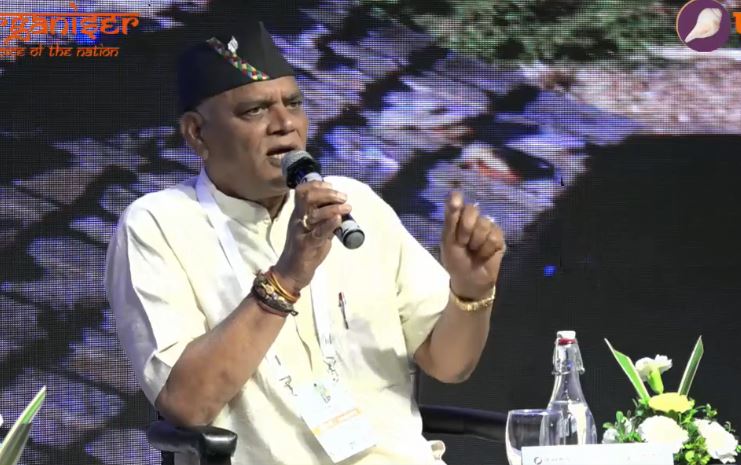 In the sixth session of Panchjanya’s environmental dialogue program, ‘Bhagirath’ Sachchidananda Bharti of Pauri Garhwal, Uttarakhand gave a message with his simplicity, clarity and simplicity. When asked about the first step taken by Richa Aniruddha while conducting the session, Mr. Bharti said that for the last four decades, the work we have done for water and forest together with the people at a small place called Upraikhal, today is being done by the Panchajanya family. With love and respect, this work spread many times. There will be many people present here before today who may not have even heard the name of Upraikhal.

Sachchidananda Bharti said that while introducing Panchjanya, Umendra Dutt ji has told so much that now there is nothing left. But if there is a session, there is an opportunity to tell the story of people associated with four decades. In the area of ​​Uttarakhand where this work took place, there was first forest around and there was life connected with forest. Food was made on wood. Little children, mothers used to bring wood. Grass used to come for the animals to sit on, house building materials used to come from the forest. The village which did not have its own forest had to depend on the forest of another village. The people of the other village could refuse whenever they wanted, they could say something. We thought that every village would have its own forest so every village would have self-esteem. For this, the woman spoke to the Mars team because most of the work related to the forest was done by women. They started making forest in small pieces. Trees were planted which were of use to the women. This is how the process of planting trees started.

Sachchidananda ji said that since I was doing this work, people had to trust me. People see the ideal life in leadership. This is how this work spread. When there is drought, our trees also dry up. To make them live, we made small pits around the trees. This was followed by an opportunity to understand the traditions of water across the country. The country has a grand tradition of saving water, managing water. Then the idea came that there would be such a tradition in Uttarakhand too. It was found out that two and a half hundred years ago in Uttarakhand, the then society had made a tradition of chal khal to save water. Pits of 32 steps by 32 steps by 3 steps were made to hold water in it. Slightly modifying the same trick skin method, we made pits of one or two square meters. We named it Jal Talaya.

Meanwhile, an amazing thing happened. In 1999, there was always water in a dry rauna. This news appeared in the newspapers. Based on that news, the World Bank’s funding team came. He proposed funding of Rs 1000 crore. We refused. This news also appeared. Indigenous movement was going on in those days. They reported the news to the head of the Rashtriya Swayamsevak Sangh, Reverend Kuppa. C. Taught Sudarshan ji. After this, a program was made for Sudarshan ji to come to Upraikhal. Then suddenly a lot of people started coming and started questioning. After questioning six or seven teams, Umendra ji, who was in Swadeshi movement in those days, Hitesh ji, who was a student of Delhi University in those days and Sirohi ji reached Upraikhal. This was the preparation before the arrival of Sudarshan ji.

People from the government came and asked us to tell them something worthwhile. Upraikhal road work was stalled for 27 years. This road became in the first 14 days of Sudarshan ji’s arrival. The locals felt that Sudarshan ji is a Mahatma who is a bigger man than US President Bill Clinton. Bill Clinton came to India in those days. Sudarshan G arrived on the night of April 6. Two-and-a-half thousand people reached where they were supposed to land, and unloaded them and brought them to the village on their shoulders. These people were chanting slogans of Sudarshan ji Zindabad. The name of the person is not chanted in the culture of the Sangh. So they were stopped but people kept cheering. It seemed to the people that this is a Mahatma in whose name the road that has been stuck for 27 years can be built in a hurry.

Sudarshan ji stayed among the people till 11 o’clock at night. Mandor’s bread, halva was made. This is an event of seven thousand feet altitude. Sudarshan ji stayed on top for three days. Went to more than 40 nearby villages. Wandering in the forest of about 8 hectares out of 800 square hectares. We have named that forest Sudarshan Forest after him. It also has 2000 cedar trees. This work was discussed all over the country when Sir Sanghchalak ji came to the fore. When Sudarshan lived for three days, people felt that something big had happened here. Then people from many countries of the world started coming. In the last few days, in ‘Mann Ki Baat’, the Prime Minister Shri Narendra Modi ji mentioned the above for two and a half minutes. Then Panchajanya published this work in detail. I thank all of them.

Richa Aniruddha asked if you refused World Bank funding. If you had money, it would be a good use. On this Sachchidanand ji said that all NGOs should work in a good way. The NGO is staffed by educated professionals from IITs and IIMs. They are doing a great job. But we have taken this work as a service. We worship the Himalayan deity. This work is worship for us. We have no project. It is our lifelong, generational work. The fund will have a limit. People will come together like a project, then when the project is over, people will separate. We have 40 thousand water ponds, no dirt in any of them. If there was a project, thousands of people would have to be involved in cleaning today. But if there is service then this water pool is regularly monitored and cleaned.

Answering a question, Sachchidananda ji said that there should be development without destruction or in other words there should be minimum destruction and maximum development. He said that trees are also for human beings and so are roads. Trees will have to be cut for the road but there is also a provision to plant trees when cutting trees. He gave the example that Upraikhal is on the other side of Kedarnath ji. When the catastrophe occurred in Kedarnath ji, water also came in Upraikhal. But not even a foot of land was left in Upraikhal as preparations were already made to save the land in Upraikhal. The results will be the same as the development.

Shri Bharti informed that it was decided to cut 70 thousand trees in Dudhatoli, 400 laborers had also arrived. We went and said our thing. Katan was stopped. If you work with a holy spirit, then the government also listens. On the question of taking this work to other parts of the country, Mr. Bharti said that on going to the Himalayan states, it was found out that the work of Jal Talaya has also started in Assam and Himachal Pradesh. Apart from this, this work has also been done in some other hill countries. He pointed out that in hilly countries where the slope of the mountain is less than 60 degrees, 1 cubic meter of embroidered trinkets can be made. Mr. Bharti said that every person should start from his home to protect the environment.