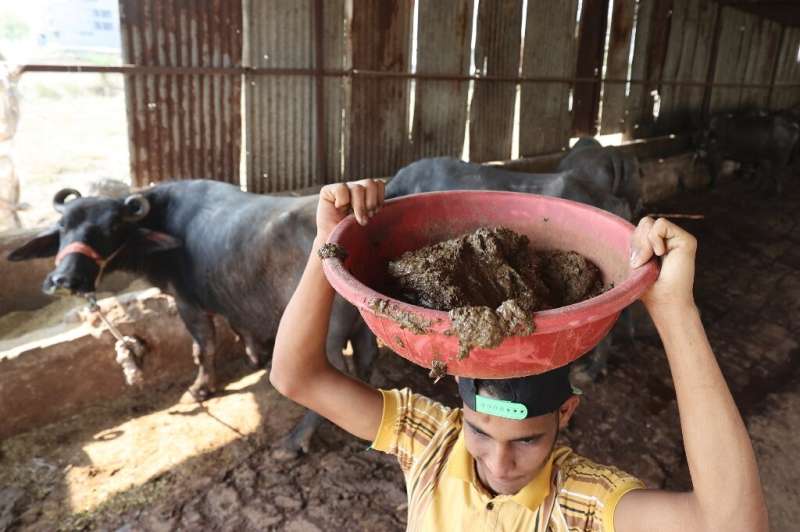 India is tapping a new energy source that promises to help clean up smog-choked cities and is already providing a vital revenue stream for poor Indian farmers: truckloads of bovine manure.

Cows are venerated as sacred creatures by the Hindu majority of the country. They also have pride of place in India’s rural communities, where they are still regularly used as draft animals.

Rural households have long burned sun-dried cattle droppings to heat stoves, a practice that continues despite government efforts to phase it out with subsidized gas cylinders.

Villages on the outskirts of the central Indian city of Indore are now being handsomely rewarded for handing over their mounds of bovine waste in a pilot project to help meet the city’s power needs.

“We have a very good quality dung, and we keep the dung clean to ensure it fetches the best price,” farmer Suresh Sisodia told AFP.

The 46-year-old has sold nearly a dozen truckloads of fresh manure at the equivalent of $ 235 per shipment — more than the monthly income of the average Indian farming household.

Sisodia’s farm has 50 heads of cattle and, in the past, occasionally offset costs by selling manure for fertilizer. Now, he is hopeful for a more reliable revenue stream.

“The farmers pick it up once every six or 12 months and there are seasons when they don’t — but the plant could give us a steady income,” he said, adding that his farm generates enough manure to fill a truck every three weeks .

His family are one of the many beneficiaries of “Gobardhan” —literally “dung money” in Hindi — since the inauguration of a nearby biomass plant by Prime Minister Narendra Modi in February.

Sisodia’s cattle droppings are carted to the plant, where they are mixed with household waste to produce flammable methane gas and an organic residue that can be used as a fertilizer.

Eventually, the plant is slated to work through 500 tonnes of waste, including at least 25 tonnes of bovine faeces, each day — enough to power the city’s public transit system, with plenty left over.

“One half will run Indore buses and the other half will be sold to industrial clients,” plant boss Nitesh Kumar Tripathi told AFP.

The Gobardhan pilot program has faced its share of logistical hurdles, with decrepit rural roads making it hard for the plant’s dung-carrying trucks to reach farms.

Farmers have also been septical of what appears to be a get-rich-quick scheme and required careful “assurances of quick and regular” payments before signing on, said Ankit Choudhary, who scouts villages for potential suppliers.

The Indian government, however, has high hopes for the initiative, with Modi pledging waste-to-gas plants in 75 other locations since the Indore facility began operations.

Cultivating alternative energy sources is an urgent priority in India, which burns coal to meet nearly three-quarters of the energy needs of its 1.4 billion citizens.

Its cities regularly rank among the most smog-choked urban centers in the world as a result. Air pollution is blamed for more than a million deaths in India annually, according to a study published in The Lancet medical journal.

The project is also guaranteed to appeal to Hindu nationalist groups — Modi’s most important political constituency and vocal advocates of cow protection.

Under their watch, “cow vigilantes” have run Muslim-owned abattoirs out of business and lynched people accused of involvement in cattle slaughter.

But bovine-centric religious policies have led to unintended consequences, with stray cows now a common sight in villages and even on busy roads in big cities.

Government acolytes such as Malini Laxmansingh Gaur, a former Indore mayor and member of Modi’s party, hope that scaling up the biogas project will incentivise farmers to keep their cows even when they are too old to give milk or help till fields.

“This extra income will both clean villages and help tackle the strays,” she told AFP.