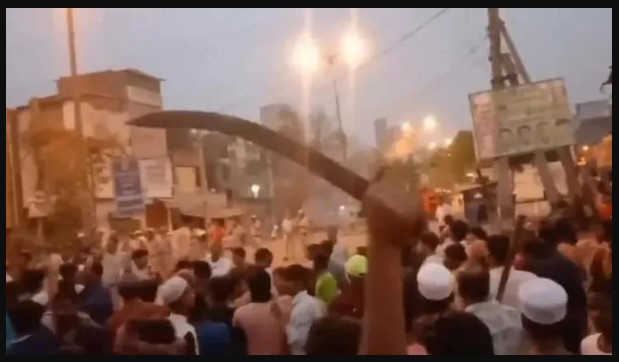 Stones and violence were reported in many states of the country on the occasion of Ram Navami procession, while Hanuman was stoned in Delhi on the occasion of his birth anniversary on Saturday. There was also a fire. Islamic extremists pelted stones during the procession. Two to three rounds of ammunition were also fired. The incident took place in Jahangirpuri. A sub-inspector and other constables were also reportedly injured in the attack.

According to a senior police official, at 6.45 pm on Saturday, locals were marching during Hanuman’s birth anniversary. Meanwhile there was a commotion. Protesters vandalized several vehicles. According to DCP Anveyas Rai, people attending the Hanuman Janmotsav procession in Jahangirpuri have been pelted with stones and scattered firefighters. Top Delhi Police officials are at the spot. The situation is under control and additional forces have been deployed.

Two firefighters rushed to the scene after seeing the blaze. Delhi Fire Service Director Atul Garg said the incidents were very sporadic, so the operation has been canceled and the vehicles have been recalled.

“This is a terrorist act,” said Kapil Mishra

BJP leader Kapil Mishra said that stoning on Hanuman’s birth anniversary in Delhi’s Jahangirpuri was an act of terrorism. The colony of Bangladeshi infiltrators is now daring to attack the citizens of India. Now it has become necessary to expel illegal intruders from the country by checking their every paperwork. What happened in Jahangirpuri is not a coincidence. It has to be treated like a terrorist attack. A jihadi conspiracy to do what was happening to Amarnath pilgrims in every alley township. These are the same people who were behind the Shaheen Bagh and Delhi riots. They need to be crushed.

Strict action will be taken against the rioters.

Citizens are urged not to pay attention to rumors and fake news on social media. (2/2)# Jahangirpuri

Delhi Police Commissioner Rakesh Asthana said the situation was under control. Additional troops have been deployed at the scene, as well as special forces have been deployed in sensitive areas across Delhi. Two policemen were injured. We will take strict action against the accused. According to Special Commissioner of Police (Law and Order) Dipendra Pathak, full security has been put in place. People are appealed to keep peace and not fall into any kind of rumors. Clashes broke out between the two groups during the procession. We are investigating the matter. On the other hand, Chief Minister Arvind Kejriwal said that peace and order must be maintained because without it the country cannot progress. While agencies, police and the central government are responsible in Delhi, the central government should maintain peace and order in Delhi.

The events that took place here before Delhi