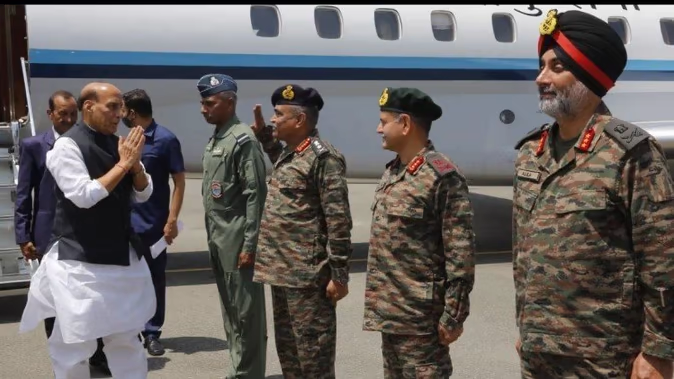 Union Defense Minister Rajnath Singh has arrived at Srinagar Airport on the first day of his two-day visit to Jammu and Kashmir. On the first day of the visit, they will visit advance areas in Kashmir and take stock of the security arrangements along the LoC. Also review the security situation in the valley. According to reports, the Defense Minister will visit the advance areas of Baramulla and Kupwara sectors. This will be followed by a security review meeting with top security officials and then a meeting with Jammu and Kashmir Lieutenant Governor Manoj Sinha.

Senior Army officers will be present

During the Defense Minister’s visit, senior Army commanders will brief him on the overall security situation in the interior areas, including the LoC. During his visit, he will visit Baramulla and Pahalgam and hold a meeting at the Chinar Corps headquarters at Badami Bagh in Srinagar on the security scenario of Jammu and Kashmir.

According to reports, the Defense Minister will take stock of the operational readiness of the Army’s Northern Command along with the Army Chief, Army Commander, Corps Commander at the Chinar Corps Headquarters in the afternoon. During this, they will discuss the anti-terrorism campaign in Kashmir and the security plan of Amarnath Yatra. The Defense Minister will also visit the base camp of Shri Baba Amarnath Yatra Pahalgam on Friday morning. He will also visit Jawahar Mountaineering Institute there.