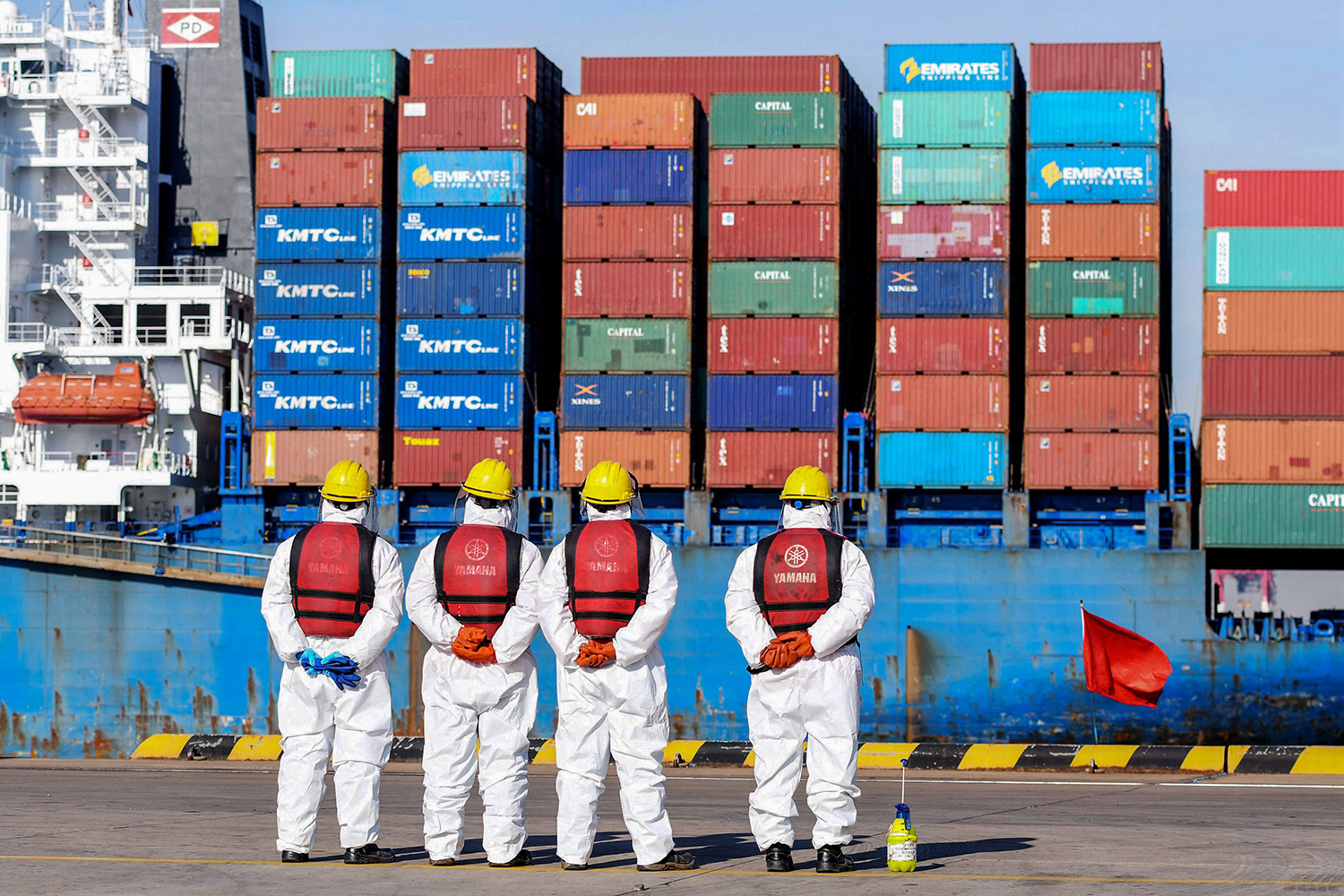 What if the new era of great-power competition was over before it had even begun? Many of today’s fears about a multigeneration conflict with Beijing rest on linear extrapolations of yesteryear’s data, harkening back to a time when China appeared on track to supplant the United States as the world’s largest economy. Yet more and more signs point to a China that is fully unprepared for the competition with the United States it once sought.

China’s economy, long in decline, is now in freefallHanthanks to Chinese leader Xi Jinping’s mismanagement. Case in point: This year, the US economy is forecast to grow faster than China for the first time since 1976, with strong indications that China has entered a prolonged era of slow growth. More surprising is that Xi, in an attempt to stabilize China’s finances, has largely abandoned his ambitious plans to overhaul China’s growth model, choosing instead to double down on the very economic policies that got China into today’s economic bind in the first place.

China’s economy, long in decline, is now in freefallHanthanks to Chinese leader Xi Jinping’s mismanagement. Case in point: This year, the US economy is forecast to grow faster than China for the first time since 1976, with strong indications that China has entered a prolonged era of slow growth. More surprising is that Xi, in an attempt to stabilize China’s finances, has largely abandoned his ambitious plans to overhaul China’s growth model, choosing instead to double down on the very economic policies that got China into today’s economic bind in the first place.

Xi’s reversal speaks volumes. It suggests he lacks confidence in his own plan to transform China’s unsustainable economic model into one that can deliver on the Chinese Communist Party’s (CCP) promise of “high quality” growth. More important is that China’s fizzling economic miracle may soon undercut the CCP’s ability to wage a sustained struggle for geostrategic dominance.

This raises a tantalizing question: What if, instead of being a competitor, China cannot actually afford to compete at all?

Xi is often said to have tapped into Chinese resentment over its colonial-era humiliations to kick-start its modern-day competition with the United States. But the decision to jettison China’s policy of hiding its capabilities and biding its time began much earlier. Indeed, for decades before Xi’s ascent into power, CCP elites made clear this dictum would be discarded as soon as the international balance of power shifted in China’s favor. When Washington looked to be terminally weakened by the 2008 financial crisis, Chinese officials made their move, betting that overseas investments and economic coercion were the keys to outcompeting the West. They were mostly right.

China’s economic clout, beyond any other consideration, still serves as the foundation for the country’s vast influence. The gravitational pull of China’s market, along with Beijing’s ability to influence economic conditions and shape political perceptions in other countries, enabled China to bind itself to the world. The fruits of China’s economic expansion also underwrote its power projection, covering the costs of the Belt and Road Initiative, military modernization, and expanding multilateral commitments. China’s GDP growth paid domestic dividends for the CCP too, empowering a model of state capitalism that broke down the barriers between the private sector and government institutions to mobilize the former in service of the latter.

Nevertheless, China’s meteoric rise, fueled by annual GDP growth above 6 percent, appears over. Yes, China’s economy has been cooling for years, plagued by systematic deficiencies like chronic overinvestment, massive debt loads, and a shrinking workforce, which has put enormous stresses on China’s finances. But these systematic trends have been exacerbated, perhaps irreversibly, by China’s disastrous pandemic response, where the lack of an effective domestic vaccine and the CCP’s unwillingness to approve and purchase Western ones have made rolling lockdowns a permanent way of life. So far, the CCP’s containment measures have resulted in plummeting industrial outputsurging unemploymentcapital flightand a sinking currency.

Efforts to stabilize the Chinese economy will be further strained by a deteriorating external environment, with the World Bank warning of 1970s-style stagflation and reduced global demand for Chinese exports — until now, the engine of China’s growth. The economy remains severely dependent on vast supplies of imported fuel, grain, and other commodities whose prices have massively surged. Western technology transfer restrictions are also taking their toll. Another challenge is growing frustration in China’s largest markets — the United States and the European Union — over Xi’s support for Russia’s invasion of Ukraine. Already, large multinational companies like Apple are shifting supply chains to Southeast Asia and other regions perceived as more stable while expatriates are abandoning the country and newly minted college graduates flee in droves. Indeed, China’s brain drain has begun.

So far, Xi has offered few new ideas for remedying China’s crisis, even as his subordinates warn about the need to “act decisivelyTo avoid financial ruin. Xi’s big bet consists of an “all-out” infrastructure push to boost the economy — the same approach that fueled China’s current debt bubble, massive industrial overcapacity, and the creation of entire ghost cities of half-finished apartments. But such investments are unlikely to stimulate China’s economy, not least because they are focused on propping up the least productive parts of China’s economy, including the state sector. Making matters worse, Xi has offered little relief for Chinese consumers, the linchpin in his effort to drum up domestic consumption, decrease inequality, and reduce the economy’s reliance on exports and unproductive investments. Consumers were integral to China’s pandemic rebound in 2021 but now face growing fears about job security and sustained income losses from never-ending lockdowns.

At the same time, one by one, Xi’s signature economic initiatives have disappeared from the front pages of China’s state-owned newspapers. That includes Xi’s push for “common prosperity, ”Which ostensibly aimed to reduce extreme inequality by giving ordinary Chinese a greater share of the nation’s wealth. Plans to introduce a property tax to slow down China’s notorious real estate bubble — where the elite have amassed vast fortunes — have also been shelved. Chinese regulators have also signaled an end to Xi’s crackdown on China tech giants, whose growing influence has long been viewed as a growing threat to the CCP’s power. Nevertheless, foreign investors, who lost billions of dollars on Chinese tech stocks tanked by Xi’s policies, remain wary. With many Western banks warning that the regulatory risks of investing in China now outweigh the potential benefits, these investors may not come to Beijing’s rescue either.

Mere months before Xi’s coronation to a third term as party secretary, CCP officials whose jobs it is to worry about economic growth, like Chinese Premier Li Keqiang, are now openly pitted against Xi and those more concerned with regime security and party control, such as Chinese Vice Premiers Han Zheng and Hu Chunhua. While Xi projects calm and warns citizens not to question his zero-COVID policies, Li refuses to endorse them and instead speaks of China’s “complicated and grave” situation. This fractured policy environment, where ideological and technocratic factions battle for influence, is eerily reminiscent of late Chinese leader Mao Zedong’s era. Just as it did then, today’s intraparty clash will produce winners and losers. For now, the latter group includes Xi, who will probably be forced to make key personnel concessions during this fall’s 20th National Party Congress to secure the support needed to guarantee a third term. For the remainder of 2022, China’s worrying domestic challenges will remain the party’s highest priority, and addressing them will take up an increasing share of China’s economic resources. The upshot is that US-China tensions will likely remain subdued, at least for the short-to-medium term.

More difficult to predict, however, is how China’s fight for resources and power will affect the country’s various domestic stakeholders. For the first time in a while, China’s state-owned enterprises, provincial and local governments, private companies, and citizens will be forced to compete for a piece of a pie that is no longer growing. As a result, funding trade-offs will be necessary, including those considered inconceivable when China’s annual growth hovers around 10 percent. That will include cuts to current and planned investments in China’s power projection capabilities, both civilian and military.

Outbound Chinese development loans, a key tool for Beijing to expand relations across Asia and Africa, have already dropped 96 percent in recent years, from $ 75 billion in 2016 to approximately $ 4 billion during the pandemic. The overall average value of Belt and Road Initiative-related projects, averaging 255 billion annually between 2010 and 2019, also cratered to less than $ 81 billion in 2020. Although these figures may recover slightly, Chinese policymakers will be hard pressed to justify such expenditures as China’s economy falters.

Similar trade-offs will also be necessary for certain aspects of China’s defense spending. In a contested resource environment, tensions will almost certainly emerge between China’s army, navy, and domestic security apparatus. The same goes for civil-military relations because local officials are often expected to provide the military with the materiel and support required for training and large-scale exercises. Overtime, China’s economic slowdown could also lead to civil unrest, which could force the military to become more involved in maintaining domestic security at the expense of its broader modernization. Potential economic constraints could also impede plans to fully fund newly announced ventures, such as China’s space force. Over the long term, China could be forced to choose among certain core missions, such as monitoring China’s coast, building up its South China Sea outposts, maintaining its air defense identification zone, and even protecting its unruly borders. Either way, China’s military will be forced to do more with less.

In the end though, China’s sustained economic cooldown and Xi’s crisis of confidence will result in the very outcome he, the CCP, and Chinese nationalists feared most: broad recognition that China may be incapable of competing with the United States at all.