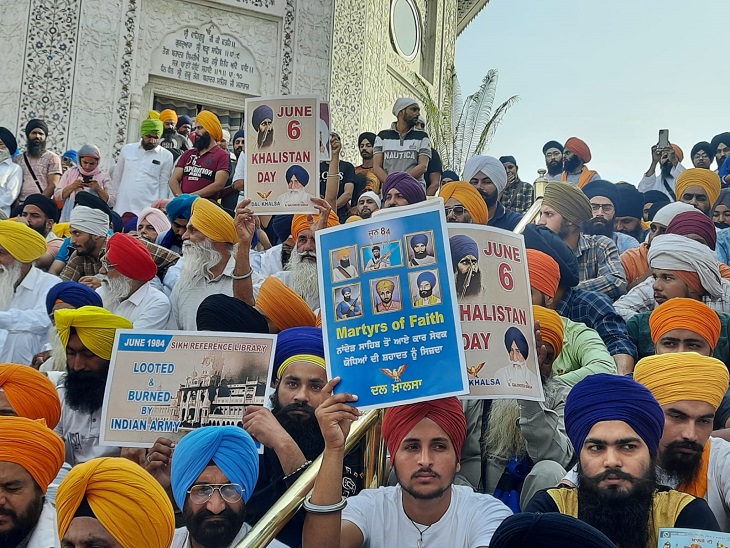 Case of raising Khalistani slogans on Ghallughara Day: Case registered against 2 youths on the basis of video, police raiding for arrest

In Amritsar, Punjab, police have registered a case against two youths who raised slogans of Khalistan inside the Golden Temple on the anniversary of Blue Star operation. According to the police, a youth first gave a speech near Sri Akal Takht Sahib and then raised slogans of Khalistan Zindabad. The youths have been identified as Manjit Singh alias Baba, resident of village Jaur in Gurdaspur and Saudagar Singh, resident of Virk village in Ludhiana. A case has been registered against both.

This FIR has been registered on the basis of the statements of Sub Inspector Paramjit Singh in the police station e-division of Amritsar. Paramjit Singh told in the FIR that he was on duty. Then he got a video through social media. In which two unidentified youths near Sri Akal Takht Sahib were raising slogans of Khalistan Zindabad. One young man was giving a speech and the other was agreeing with him. In this speech, the young man was talking about breaking the country, dividing the country in the name of religion and spoiling the atmosphere.

The names of two youths came under investigation

The police had registered this FIR in the name of unknown youths, but after investigation the names of Manjit Singh alias Baba and Saudagar Singh came to the fore. Raids are being conducted to nab both of them. Soon the names of other accomplices of the accused will also be added to the FIR.

Police have registered a case against both the accused under sections 121 and 121A IPC. Both these sections are for those working against the country’s opponents or against the Government of India. If found guilty, the accused can be punished with death penalty or life imprisonment.